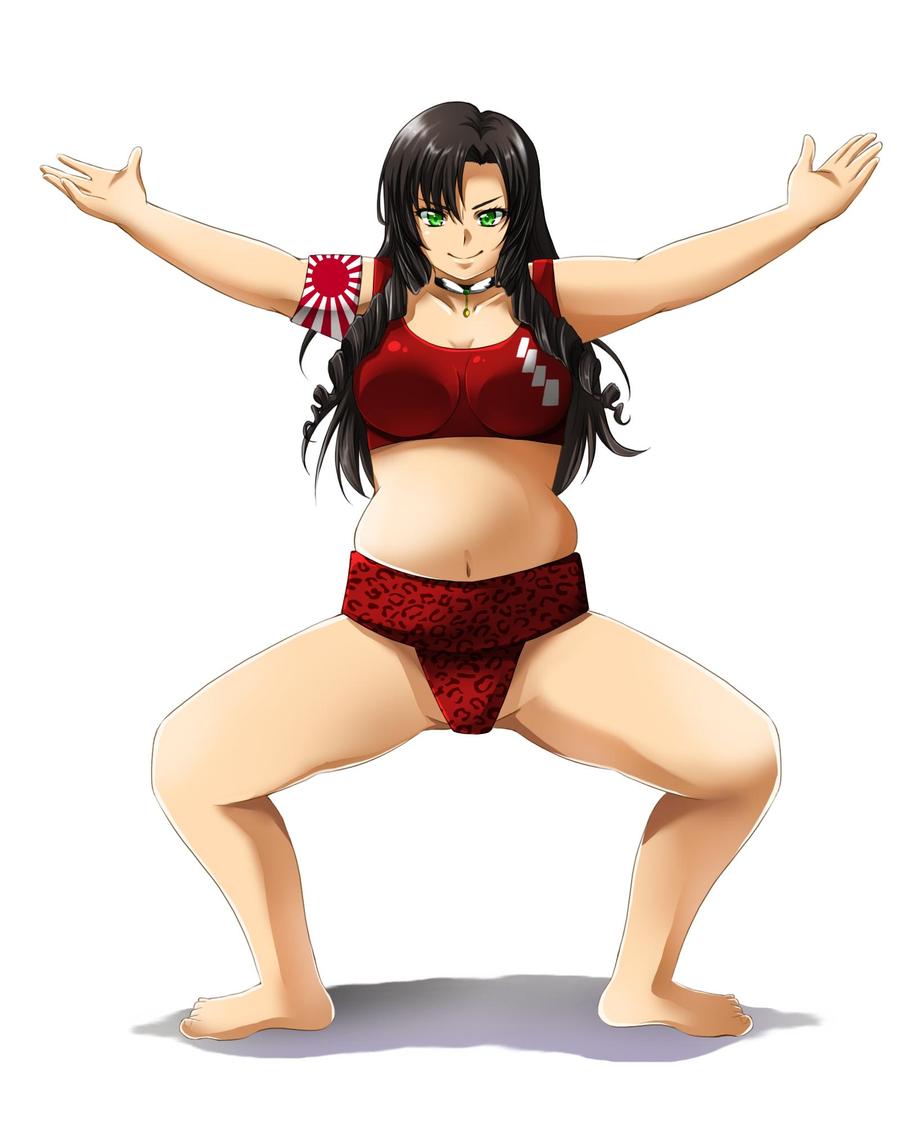 Tengoku no Tenshi no Hyaku (Angel Splitter)- A torture rack

Waxing Moon, Waning Tide- A bear hug that is followed up by a falling forward and slamming the opponent on their back, crushing them between Akashi and the mat.

Brawler Buster- Exactly like 'Waxing Moon, Waning Tide' except Akashi places her forehead against her opponent's before dropping to the ground, crushing their skull between Akashi's and the mat. While exponentially more devastating, this move tends to hurt Akashi a lot as well and she'll only use it in dire straights or against particularly tough opponents.

Crashing Tide, Thunderous Mountain: Akashi will grab her opponents legs when they are on their back and leap over them, slamming her large butt into their face as well as putting them into a painful matchbook pin.

Personality: Akashi is strong willed. She isn't usually mean spirited but in the right mood she can be cocky or even a bit sadistic. She likes a good match and is proud of her Sumo background. She is confident and acts like it. She will try and help others as long as there isn't too much of a burden for her to do so. For example she will give advice to those who seek it, especially if they want to learn about Sumo. She does have honor but will stoop down to the level of her opponents. Generally the dirtier they are the dirtier she will become.

Past/History: Akashi grew up in a large family who had devoted their lives to the art of Sumo for many generations. The only daughter of five children she grew up as "one of the brothers" being very tomboyish. They taught her the art of Sumo but she was unable to enter professional competition like her brothers due to her gender. Unperturbed by this she found the AFW and hopes that her Sumo roots will bring her the kind of fame that she could not earn inside the Dohyou.

Attire: Akashi wears a traditional Sumo mawashi sash that is dark red with leopard spot pattern. She prefers to go topless whenever she is able but if she must cover herself she wears a dark red sports bra with a stylized shide on the left breast. She also wears an armband depicting the Japanese navel emblem.

Fun facts
-Akashi was born in the Ryōgoku Kokugikan. The Sumo hall in the Ryōgoku district of Tokyo. She was born in the hall during the hanbasho tournament that her father was participating in. Though she was supposed to be born a few days after the tournament, she came out early, during the middle of the match. Her brothers assisted her mother and an on hand doctor during the birthing process and everything went without a hitch. Her father had continued on in the tournament and won every match he had afterward. When asked about the fierce power during his matches, he said that it was the birth of his daughter and the feeling that the great Akashi Shiganosuke was guiding his strikes. Akashi was named after the man who is considered to be the first Yokozuna. Her brothers are extremely jealous of this.

-Akashi can out drink almost anyone in a drinking contest. She can hold a large amount of liquor and rarely gets hangovers. Unfortunately she gets drunk only after imbibing a small amount of alcohol. This doesn't stop her from drinking often.

-A little more about Akashi and her family: Akashi is the youngest of five children. She is also the only female. Her family has a long tradition of Sumo and her father had a long and distinguished career in Sumo, even achieving the rank of Yokozuna. Her brothers are all named after famous sumo like Akashi is: Her oldest brother is Kajinosuke and is 38. Then are a pair of twins named Umegatani and Toutarou. They are 33 years old The youngest is Hitachiyama. He is 28 and is closest to Akashi in both age and bond. Akashi's father died in his sleep when she was six years old. Though the reasons are unknown, the Tanikaze family believe that he had accomplished all his goals in life. He had a strong  male that had become a Sumo and was able to take care of the rest of his family. Three other boys that looked like they would be strong men and carry on the tradition. A beautiful girl and a strong lovely wife. He had also had a great career and even achieved Yokozuna. It is said when they found him in the morning, he had a knowing smile on his face and looked like he was truly at peace.

-Akashi has two tattoos on her body. On her right shoulder blade she has the kanji for 'Ronin' or masterless samurai. The Kanji is from one night of drinking with Sarah Gatt. It represents her life as someone who was born to serve Sumo and could not because of her gender. The other is a three pronged tomoe on her left. It is often found on the drums that the Kami Raijin beats. In Japanese mythology, he is said to have been the kami that created the typhoon that protected the Japanese from the mongols. The 'Kami' in Kamikaze. The three prongs also represent her father, her mother and brothers and her adopted sister Taylor Parker. The three stages in her life and the family who was with her during them. 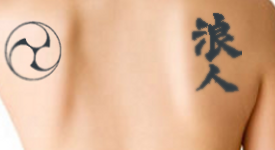 ^Approximation of how it looks^

-As per Sumo tradition, Akashi only eats chicken on the day of the match. It is a superstition for sumo because a chicken stands upright on two legs, rather than on all fours.

Losses:
Vs. Haruna Saito via Count Out
Vs. Rebecca Tomko via Pinfall
Vs. Joy, Natasha Loclear, <[Masako]>,

Timeline
Road to the Top

Begin: A Family Affair/Hot for Teacher