» Clover Rose vs Mary Clarison!
by Epicsnivy Today at 6:31 pm 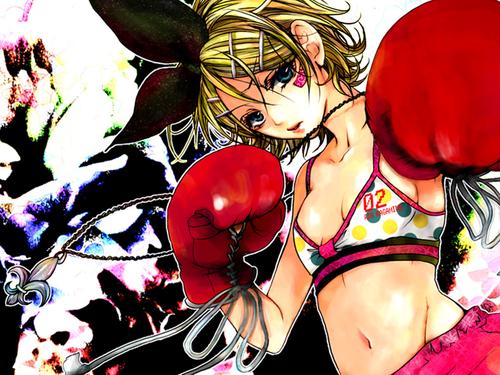 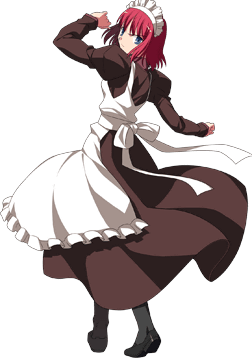 Match Type: Strap Match
Winning Conditions: First wrestler to touch all four corners consecutively will be declared the winner.
Special Conditions: Both wrestlers are tied at the wrist to a length of leather strap.

Gabbie shadowboxed in staging area of the arena as she waited for her next match. The tournament had finally finished the opening round and she was ready for the next round but she couldn't say she was pleased. She was normally a very serious girl, but those who didn't know her might think she was always in a bad mood. Her demeanor was often cold and her face held a bit of a scowl to it when she was serious. However, tonight, any of those people who normally saw what wasn't there would be spot on.

Not only was the this match some ridiculous farce, but she wasn't even told who her opponent was going to be. When her music finally started up, she appeared in the arena to a pretty good cheer. She had a fair amount of wins under her belt and people liked her no nonsense style and commitment to fighting fair. She was dressed in a pair of white MMA shorts with blue trim and a white sports bra with the same trim. On her hand were a pair of white MMA gloves with the Canadian flag over the top and the Union Jack on the palms. Her body was covered with a billowy white boxer's robe that was trimmed in blue and had a blue maple leaf on the back with DESJARDIN printed in a semicircle over the top.

She shadowboxed her way to the ring and then slipped inside. She walked to her corner and gripped the sides of the ring, keeping her back turned on the entrance ramp. She was still trying to figure out how to keep from having to be in this match. She didn't care WHO she had to fight, she just wanted to have an actual match.
_________________
Ask for a name change at your own risk!

It was time for Hisui to make her first single match.  She had done and won matches before but that was always when she was part of a tag team.  Now she was going to and face a wrestler in the ring all alone.  Thus, she was a bit nervous but she kept a cool face as she tried to calm herself down.  Akiha had told her to just to think about in a similar manner to her standard tag match.  Though Hisui was trying to do so, she was still having a hard time keeping herself calm.

To make manners worse she was also going against Gabbie in a strap match.  The reason she was even placed in this tournament is because the other competitors did not beat the clock in the Tempest Tournament.  In fact, Hisui had not even taken part of the first round but here she was in the semifinals.  Then again she heard something similar had happened the previous Lightning Tournament.

Her train of thought was ended when the door was suddenly opened and Kohaku entered the locker room.  “Hisui you ready for your match cause they need you up there.” stated Kohaku in a serious tone.  “Understood and thank you.” stated Hisui in her monotone-like voice as she got up and gave a bow before leaving her locker room and headed towards the staging area.

She would arrive at the staging area, now waiting for her music to play.  She didn't have to wait long as her theme music would soon start to play.  The maid would make her way out, wearing her typical black one piece with a white outline.  The audience would boo as not only was she related to Akiha but when she had tag teamed with her sister, the two had cheated.  It was disheartening to hear the boos as she herself had never wrestled on her own and was yet being judged.  Still she pressed forward and made her way to the ring.

The maid would make her way to the stairs as she then climb up the ring before entering by going below the middle ropes.  She would then take a moment to look at her opponent.  “Greetings, I am Hisui, I shall be your opponent.” she stated in a monotone voice as she gave a polite bow.
_________________

Gabbie turned her head and peeked at who was coming down the ramp and her eyes narrowed at what she saw. Suddenly she remembered the old phrase from school. "There's something rotten in the state of Denmark." She spun around fully and watched Hisui come down the ramp. She pulled her hood off before the maid entered and then shrugged off the rest of the robe, folding it quickly and practically tossing it at the referee as Hisui stepped forward.

Gabbie took a few steps of her own and shook her head. "I know who you are." The Canadian growled. 'We've met, don't pretend we haven't. You're with Akiha!" Gabbie had a hard time remaining composed. "Did she put you up to this?!" Gabbie demanded. "This sort of ridiculous "match" She made the quotes sign with her fingers. "Is exactly the kind of thing she'd be interested in. Why isn't she here herself so she can try and cheat me out of another win!?" Gabbie demanded an explanation from the maid, even as the referee began to strap up her wrist.
_________________
Ask for a name change at your own risk!

It seemed that Gabbie was annoyed and was already thinking of Akiha and demanding an explanation.  Though Hisui was willing to serve Akiha she didn't want to live in her shadow forever.  She took a deep breath before giving her opponent a serious look.  “I had nothing to do with this match type and neither did my mistress.  As for me taking part, it was only done because the other wrestlers could not beat the clock.  Do you have any additional questions?” stated Hisui in a manner that a maid would talk to a guest.

“If you do not, I would ask that you treat me like a wrestler, not some kind of emotionless tool that only does her master bidding.  I do have my goals and ambitions.  I am here for myself, not for Akiha.” stated the maid in a slightly annoyed tone as she glared at her opponent.  It was clear she did not like the tone that Gabbie was taking with her and actually felt disrespected by it.  The Japanese wrestler then saw the referee girl come to her and began to tie the strap to her wrist so that she and Gabbie would be connected.
_________________

Gabbie was incredulous when it came to Akiha's explanation. She didn't really buy it, that was for sure, but she let it go. Arguing that point at this stage in the game was pointless. Unfortunately, she couldn't say she was thrilled about the rest of what Hisui said. Once the leather strap was on her, Gabbie crossed her arms.

Hisui could hear what Gabbie was saying but she did not agree with it. “Strap matches like this have been around for over a thousand years though they used metal chains. You may see this as a farce but there is much history with this, going way back to the gladiator pits. Wrestling in a way is said to be modern day gladiators. Thus, by taking part of such a match we are paying tribute to history.” stated Hisui as she decided to give a bit of history as the referee then finished tying her wrist strap.

The two were now both connected to one another and thus, could not escape one another. Usually, at this point, Hisui would go to her corner but due to the straps, she remained at the center of the ring keeping her eyes on her opponent as she waited for the bell to ring.
_________________

Gabbie opened her mouth to speak as Hisui challenged her but she didn't really have anything to say about it. She didn't like the Gladiator analogy, but she had talked a lot about tradition and honor and now the maid was saying if she didn't like the match, she was a hypocrite. It infuriated Gabbie, but the Canadian didn't have a response, yet. The way the crowds were, she definitely felt like an olde tyme gladiator.

"Tch." Was all she could manage. "This match is still stupid."

She pulled her hands into her normal fighting stance. She could already feel how cumbersome the strap was on her arms. She was just thankful that she preferred to fight with her feet. As the bell rang, she rushed at Hisui, pivoting when she was close and trying to hit Hisui with a sidekick to the gut.
_________________
Ask for a name change at your own risk!

Her opponent didn't have a real response to her. It seemed that Hisui had won the little debate but, in the long run, it wouldn't really matter. What truly matter was who would win the match and go to the finals of the Tempest Tournament Finals.

The bell then rang and Gabbie rushed in. Hisui would get in a fighting stance but despite this, she was still hit in the gut and sent a bit to the side. “Ahh...” stated Hisui as the attack did take a bit out of here but she still managed to stay on her feet. It seemed that her opponent had some pretty brutal strikes but the match had just begun and Hisui was ready to fight back. The maid would grab the strap with her hand before attempting to pull on it, trying to put her opponent off balance and bring her towards her. If successful she would try to knock the Canadian down with a clothesline.
_________________

The kick was satisfying and told Gabbie much of what she needed to know about Hisui. The girl might be in the league, and she talked bold, but she doubted she had the skill to go very far without some help. The sort of help Akiha needed.

Unfortunately, as she pulled her fists back up into a proper fighting stance, she was still feeling how uncomfortable the strap was and it was distracting enough for Gabbie to be yanked forward and off balance by Hisui. As she stumbled, there was little he could do but eat the clothesline as it smashed into her petite chest.