Aisha Love (Aphrodite) "The Pink bomber"/ "Love of the World"

Aisha Love (Aphrodite) "The Pink bomber"/ "Love of the World"

Strikes: 4.75/5 Don't get hit by her kicks or you are in for a world of hurt
Submissions: 3/5 Average against submission
Powerhouse: 3/5 She can power through a few hits but not everything
Aerial: 5/5 Part of her strategy, she enjoys catching opponents off guard through clever jumps and other aerial maneuvers
Counters: 4.5/5 Slightly augmented by her speed. Can't take straight hits but can avoid them.

Finishing moves:
Aisha
-Love Letter: Aisha rebounds off the ropes, flipping forward to unleash a powerful backflip kick to the head of her opponent.
-Bunny Bounce: Once again rebounding off the ropes, Aisha will hit her opponent with her rear, jumping up quickly to hit them square on the head with her impressive leg strength. This will lead into a light smother and school girl pin as she grabs her opponents legs and smothers the face with her rear.
-Pain Train: While her opponent is in a seated position at the turnbuckle, Aisha will run at them and jump into the air, landing her feet right into the face of the opponent, along with the full weight of her body. She will have limited theatrics in this.

Aphrodite
-Acidalia: Anchor Hold
-Beauty of the Old World: An Inverted Gory Special that sometimes goes into an inverted gory bomb. While more in Aphrodite's repertoire of moves, Aisha is known to use it in her move set.
-The Apple: Imploding Senton bomb often done as she in thrown an apple by her entourage or at her opponent as a show of disrespect to them.

Visual Appearance: A somewhat below average height woman with light tan skin and dyed pink hair, accenting her bright green eyes. Her body is well toned, with not much of any fat on her.  Her chest is an ample C cup. This further accentuated by her appearance as Aphrodite and reverting to her natural hair color of blonde 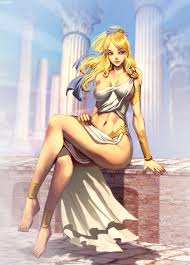 Personality: She is a rather positive woman and finds wrestling as an outlet to get out aggressions or any doubts that she has in civilian life. She can be rather stubborn in this endeavor as her drive to win can sometimes get the better of herself, refusing to quit and sometimes disregarding her own safety to perform  a death defying maneuver. This personality is far different when it's Aphrodite, whom seems far more cocky, bragging, and far more empowered with her self.

Past/History: Aisha was born Aisha Varina Norman in the town of Fuquay-Varina, North Carolina to a family of three brothers and two other sisters, the youngest child of the six. Her father, in his youth a wrestler, always brought wrestling into Aisha's young life, wither it was watching it on television or going to local events. It would be no surprise that out of the six children, four of which would go on to find a career in the sport.
Young Aisha's first foray into the ring was at seventeen, serving as at first a referee for a local promotion, but quickly managed to become a member of the roster. Success was hard, even with training from her father. It would take several years before she became even a main stay on any roster, moving around the country to different promotions until finally she did it, becoming a big hit among the crowd and eventually becoming a champion. From there, she would travel across the world, learning of different styles and techniques to perfect her kicking techniques.
She joined the AFW Friction roster to earn and hopefully find great success.

Wrestling Attire:
-Regular Ring Attire: A pink with white trim two piece with matching boots. A heart over her right butt cheek.
-Special Attire: Worn only for special matches, she will go into her bunny girl persona , with a pink and white trim, bunny ears that match, and the same boots as her regular attire. A heart on her left butt cheek.
-Aphrodite Attire: Varies heavily from  match to match, focusing on very skimpy Greek attire and bikinis.

Fun Facts:
-Loves chocolate and almond candy bars.
-Has a thing for the color pink.
-Has an associates degree in history.

CHAPTER ONE: A ROUGH START
1.)Aisha's first match, a victory against  Kali.
2.)Aisha and Kali have a rather steamy moment after the match.
3.)Aisha takes a terrible loss against  Jessica Wright.
4.) Even though she gave it her all, she still lost her match against Belinda Northman, but made a good friend and rival.
5.)Aisha loses a long tiring match  that she wasn't sure why she was in a bunny outfit, against Del.
6.) Summer Splash 2017 was a Tag Team opener and a performance between both Aisha and her partner against Yuki and Spring Tiger.
7.) Given a match against a far more experienced wrestler, Aisha once again finds herself on the losing end.
8.) Fed up with losing, Aisha disqualifies herself in a surprise attack, exiting the tournament and leaving her in a noew questionable position.
9.) Humiliating defeat after her better sportmanship proves to be her disaster.
10.)Much needed win against Gaster during the Halloween Paperview. A messy and thrilling match.

CHAPTER TWO: A GODDESS EMERGES
1.)The goddess Aphrodite makes her appearance as she defeats Tessa in an Oil Wrestling match at Summer Slam 2018

2.)Aphrodite ends another match , this time against the young Hoshino Yuubari.

3.) The goddess win against a tough Cajun woman, rather a show

5.) A chance once again to claim the Rising Star Title. A nail biting match that has the goddess meet her match in the form of a troublesome Yuki-Onna whom beats the goddess in a match worth of the title Rising Star.

6.) Aphrodite gets an interview and gives quiet the show.

7.) Aphrodite gains a chance to after a failed title shot to face off against a foe that may be a little more than she can handle.

9.) In turn at the mini PPV following Aphrodite is then dominated by a hardcore wrestler

10.) Aphrodite faces what could be a fabled true Amazon in a grueling match up.

2.) Aphrodite puts out an open challenge and is brutally attacked.