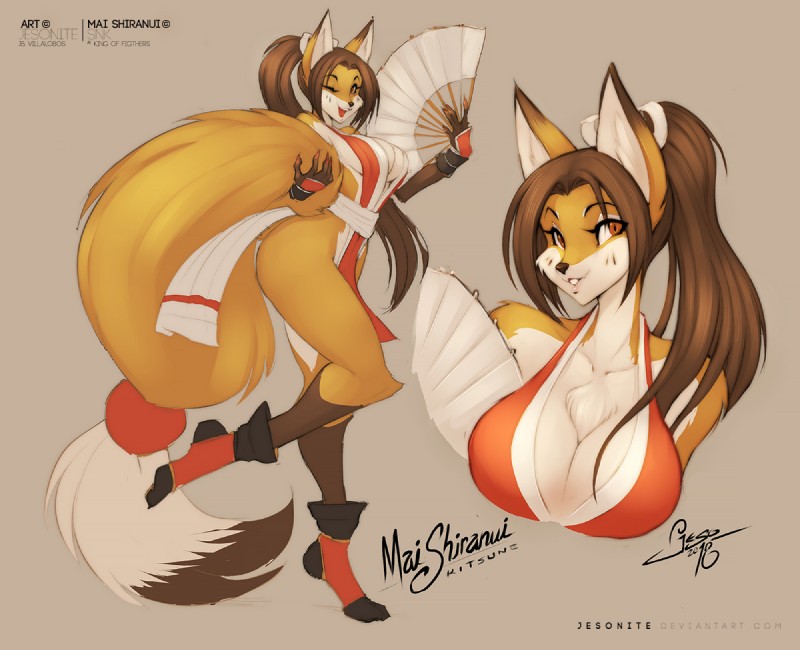 Strategy: Flashy but fast attacks that strike like a fiery blaze, she uses her natural agility and ninja like grace to run circles around an opponent. Aerial high flying moves are common along with many other non lifting style attacks.

Beautiful Song: Yori jumps from an elevated position to swing the large red ball swinging from the back of her outfit to smash into her opponent. If allowed, will channel ki into it to create a rather fiery effect.

Fanfare: One of Yori’s few submission moves is a smother, jumping from either an elevated position or after a burst of attacks to wraps her thighs around the head of an opponent and bring them down in a smother, chocking them out.

Fearsome Fire:  Yori will launch into somersaults, coming at her opponent to strike them straight in the chest with an elbow strike straight to the chest. In matches with allowed power level, this will be a fiery blaze as she strikes her opponent.

Appearance: A stunningly beautiful young fox maiden with orange fur with tufts of white. Well endowed supporting a shapely D Cup with a body that is fit and buxom to match. She is ready to take on all comers with her orange fur and tufts of white to accent it, leaving not much to the imagination in attire suiting a kunoichi more in line with drawing attention before going in for the kill.

Personality: In the ring Yori can be anywhere from serious, flirty, to even vain, but overall is usually rather kind and nice to other in or out. When working as a fighter in the league, she usually likes to kick back and go to parties or clubs, a true party animal when it comes to it.

Similar topics
» Hannah Bell vs Yori Takibi
» The Second Coming: Zetton vs Yuri Takibi
» Settling a Debt (Yori)
» A meeting of foreigners. (For Yori)
» Music Brings Us Together (For Yori)