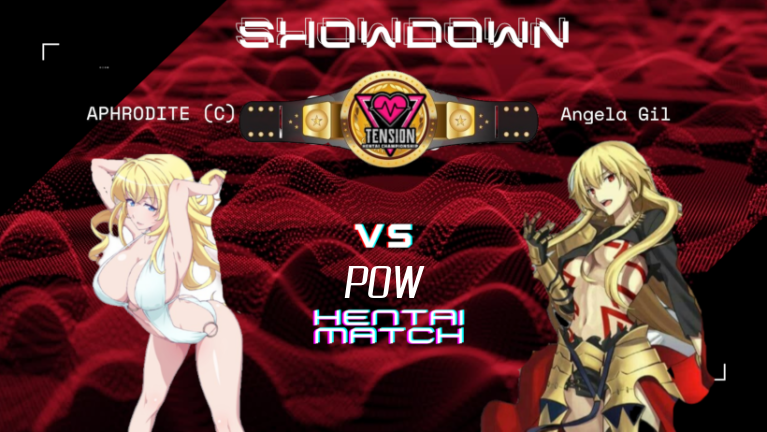 Hentai Championship, she had came a long way, while joined not long, she would enter the match with confident, wearing nothing but a pair of Gold Leopard Bikini, she would look at herself in the mirror with confident, the last time she had met the so called "Goddess" She lost via disqualification, but she had humiliated her, this time, she would ready to finish the job as she make her way down the ramp, waiving at the audience as her theme played, she would make her way toward the ring and slide into it easily, goes into the corner with a confident smile on her face as she give some flying kiss to tease them, while waiting

After being humiliated by Angela before a collected crowd, Aphrodite had near disappeared from the ring, not even tweeting anything. The only thing that had setup the match was officials for Tension stating that the supposed goddess of love's first title match would be on the next PPV, Showdown. In this time Aphrodite had simply been focused on one thing, absolute revenge upon the usurper that had made a fool of her so easily. Training a practice, gathering every bit of knowledge she could to defend her place as the undisputed Hentai Champion of the brand. Even in her off hours, not as Aphrodite but as Aisha she was dead focused on one thing, beating Angela.

At the sound her rocking Greek music that she came down with typically, Aphrodite had made her grand entrance, laying about on a palanquin carried by four backstage workers, the best looking the she could find. Wearing togas, Aphrodite lay on it, eyes trained forward, forward towards Angela adorned in silk attire that was translucent. Once to the ring she was let down carefully, taking the hand of one the attendants and kissing it before walking slowly up the stairs and into the ring. She would taunt Angela then, smirking as she'd slowly twirl around, arms raised to the side as she took in the crowd before staring daggers at her opponent. She meant business now.
_________________
-Moonlit Roster
-La Avispa Negra II
-Aphrodite: The Love of the World (Formerly Aisha Love)
-Ragna the Crushing Beast
-Ninja Kitsune Yori Takibi
-Grizzly Yamamoto

"Your partner wont be here to help you here, it's just you and me Angela," she says after walking forward, bowing slightly less as a show of some sort of respect and more as a way to show off her cleavage to the cameras that flashed. Gravity was doing their work on them and she made sure they all, even Angela got a good look. She wasn't scared of someone like her. Even if what she did was terrible, but such only fueled her immediate desire to make her pay for the transgressions that she committed.

"I'm going to make you bow to goddess of love, to make you worship me regardless wither you want to or not," she'd threaten, no longer playing games.
_________________
-Moonlit Roster
-La Avispa Negra II
-Aphrodite: The Love of the World (Formerly Aisha Love)
-Ragna the Crushing Beast
-Ninja Kitsune Yori Takibi
-Grizzly Yamamoto

"I don't need him this time, I can finish you off all by myself" She said with a smirk as she walk toward her before she would simply nod her head. Watching the Goddess with a smug smirk as she fold her arms before she would hear the Threat "Ho? Is that so? Make me Bow? Don't be ridiculous, I rather be beaten unconscious than bowing to a Slut like you" She said with confident as she glare at her

As the bell ring, Angela would make the first move by shove her backward being bring her arms up to taunt Aphrodite with her signature and smug look on her face, completely confident in her own ability
_________________

She would be shoved back, taunted at as anger boiled up inside her. She'd immediately go into a short run, aiming to tackle Angela down to the ground and begin to try and pummel the stuck up bitch that dared to challenge her.
_________________
-Moonlit Roster
-La Avispa Negra II
-Aphrodite: The Love of the World (Formerly Aisha Love)
-Ragna the Crushing Beast
-Ninja Kitsune Yori Takibi
-Grizzly Yamamoto

Of course, Angela would only had a smug smirk on her face as she walk toward the so called Goddess, ready to face her as she stand there with her arms folded before glare at her, yet, Aphrodite would make the first move as she felt herself being shoved back as she stumble backward few steps, she would then move aside to dodge the tackles as she grab her shoving her knees toward her belly as she stand there, grit her teeth and smirk

If it worked, she would then push her back up and give her few slaps toward her face, pushing her backward before she would give her a spin kick to her belly, try to push back against
_________________

Aphrodite's anger and rage that had leapt out of her had now backfired early in the match as she tried to tackle Angela down to the mat to begin to beat on. Instead she missed the tackle, Angela bring in a knee strike to almost make the goddess regurgitate her lunch, making her stumble back before being assaulted with slaps directly to her face. The disorientation alone was enough time to give Angela one last hit on her, a spin kick directly again to the stomach, sending the goddess back to the ropes in pain.

With her strikes hit home, she would move toward them with a smug smirk before she would wrap her arms around Aphrodite, with one hand message her right breast, her other arm slowly goes toward her crotch as she would start her teasing early, want to Humiliates Aphrodite as soon as possible with a smug smirk on her face