» Battle of the Shadow Furries
by Jackster Yesterday at 9:36 pm

» Alls Well that Ends Bell (Lily and Leona)
by Ringropes98 Yesterday at 7:28 pm

*Trying to outlast his opposition by any means necessary, Cobra witnessed Lauren collapse to the ground from his overzealous assault on her body.* "And that'ssss not all, ssssweetheart~" *Grabbing a fistful of her golden, luxurious hair he subsequently dragged her towards the center of the ring, positioning his arms around her backkside.*

"On the surface, it seemed as though Cobra was on the brink of applying a bearhug, but once he had elevated Lauren upwards and completely off of her feet, he immediately introduced her to the ring by catapulting her downwards for a power slam to reestablish his dominance in this scuffle!* 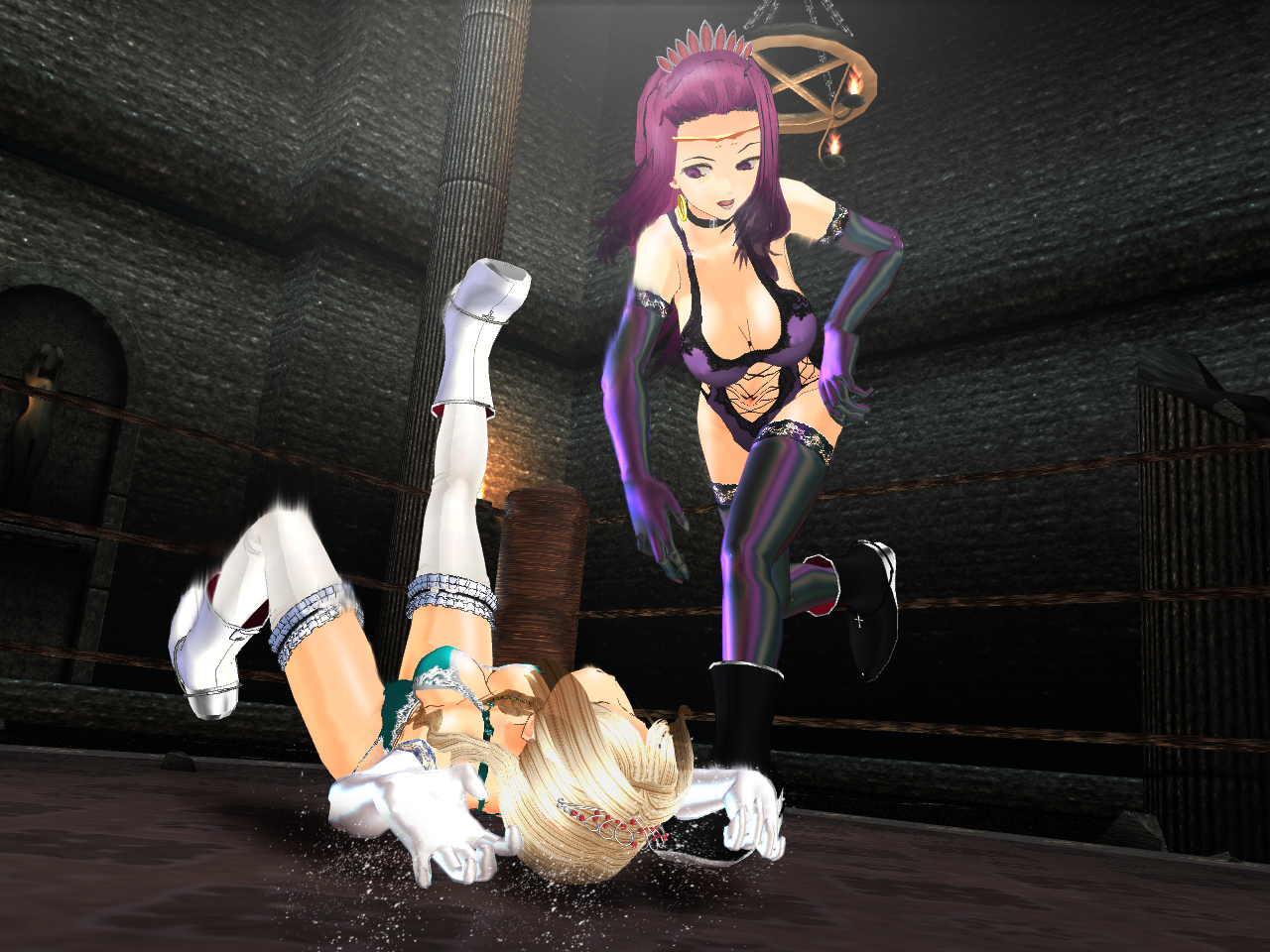 Lauren groaned as her heavy body was lift up and sent crashing down hard to the mat! She let out a loud howl of pain as she hit the canvas, weakly kicking the mat after as she laid there on her back. Lauren was down and clearly in a good bit of pain as Cobra had taken control of the matchup again leaving Lauren down on the mat which was not at all where she wanted to be against any opponent.
_________________
"The Amazon" Alaina Sanders-Friction
Suzumi Ishikawa "The Tsunami"-Friction
Peggy McIntyre-Friction
Hikaru Sawazaki-Friction
Rosa "Crusher" Cabrera-Friction
"JJ" Janella Johnson-Friction
Raquel Masters-Friction
Lauren Fredericks-Friction
TAG TEAM
The Irish Amazons

*Although his move was remarkably effective, Cobra squandered little time with the second portion of his zealous onslaught, quickly scaling the nearby pole while perching himself atop the highest point. Lauren would gradually return to her wobbly feet, clearly trying to shake off the stunned sensation she was currently experiencing. Unfortunately for her, the energized anaconda wasn't about to give her a moment of respite!*

"That'sss right...jusssst a little longer~" *Cobra was finally back in his natural habitat- Skulking his unknowing prey, waiting for the precise moment to strike with the sharpest of moves. Once he spotted her finally reach the zenith of her recovery, he put his plan into action- Coasting through the skies as if he were as light as a feather, Cobra landed on both feet, swinging himself forward while capsizing Lauren, only to reintroduce her to the ground for a brutal panama sunrise!*

Lauren was hirting and hobbled as she staggered up to her feet. Things only got worse though as she was smashed painfully to the mat!

"AAAAAAHHHHHHHHHH!" Lauren howled out in agony as she meekly kicked her limp legs as she was laid out on her back clearly reeling as Cobra was surging.
_________________
"The Amazon" Alaina Sanders-Friction
Suzumi Ishikawa "The Tsunami"-Friction
Peggy McIntyre-Friction
Hikaru Sawazaki-Friction
Rosa "Crusher" Cabrera-Friction
"JJ" Janella Johnson-Friction
Raquel Masters-Friction
Lauren Fredericks-Friction
TAG TEAM
The Irish Amazons

*Hearing the roar of the audience was enough to reassure Cobra that he had begun to win over the ecstatic audience, and after taking a fleeting moment to get his faculties back managed to scramble back to his feet.* "And that'ssss what happensss when you trifle with the snake- You get bit!"

*Steadily approaching his discombobulated target, Cobra confidently planted the base of his foot across Lauren's midsection in a dominant fashion, asserting his unparalleled power with such a mortifying pin!* "Jussssst lie sssstill- it'll all be over ssssoon~" *Cobra reassured her, grinding the ball of his foot against her glistening stomach.*

Lauren was hurting, although she was not yet out of it. Cobra opted to go for a pin which was a good move but he went for the most insecure pin he could! Lauren was down and acing but after the one count she raised a shoulder up to stop the count, grabbing hold of Cobra's ankle. Lauren tried to spin her torso, attempting to send Cobra to the mat with a dragon screw before trying to rise again to her feet. "Going for a pin that cocky already? Are you kidding me?"
_________________
"The Amazon" Alaina Sanders-Friction
Suzumi Ishikawa "The Tsunami"-Friction
Peggy McIntyre-Friction
Hikaru Sawazaki-Friction
Rosa "Crusher" Cabrera-Friction
"JJ" Janella Johnson-Friction
Raquel Masters-Friction
Lauren Fredericks-Friction
TAG TEAM
The Irish Amazons

*Triumphantly standing high and mighty overtop of the immobilized Lauren, Cobra knew that he wasn't on the cusp of claiming any sort of victory other than a public one- If he found the favor of the audience, either through his wrestling prowess or ability to keep them entertained, then he would ultimately claim something more important than a tenuous victory: A popularity boost. Before he had the chance to whimsically daydream about scoring such an easy victory however, Lauren broke his concentration by tugging his leg, stopping the count rather quickly before going on the offensive and forcing him to the ground!*

"Hsssss!" *He plaintively snarled, crawling towards a vacant corner while subsequently turning towards his competition.* "Hey, can you blame a guy for wanting to impresssss you?" *Although his attempts to try and razzle dazzle the beguiling blonde may have been a little misguided, his heart was certainly in the right place. With an ever-present smirk plastered across his face, Cobra gradually began to replete his lost energy while flicking his tongue towards the ravishing woman.*

Lauren rose back to her feet, shaking her head at Cobra while they did the tongue flicking. He was really selling the whole snake thing. She moved up towards him looking to lumber at cobra as quickly as she could looking to lower her shoulder as she hoped to smash in to the man with a shoulder block! Lauren wasn't known for an overly flashy or graceful move set, but she was more concerned with everything being effective.
_________________
"The Amazon" Alaina Sanders-Friction
Suzumi Ishikawa "The Tsunami"-Friction
Peggy McIntyre-Friction
Hikaru Sawazaki-Friction
Rosa "Crusher" Cabrera-Friction
"JJ" Janella Johnson-Friction
Raquel Masters-Friction
Lauren Fredericks-Friction
TAG TEAM
The Irish Amazons

*Currently busy convalescing against the bottom turnbuckle after the supple bombshell forced him into doing the splits, Cobra was incapable of predicting what would inevitably happen next!*

"Hhrrrk!" *Gnashing his teeth from the visceral impact of the blow, the perceptive python noticed something peculiar about her posture- Namely, she had left herself momentarily exposed to a quick shift in pace!*

"Let'ssss ssslow things down, shall we?" *Latching his legs around Lauren's throat, he began tugging her towards his midsection in a hasty attempt to try and choke her out, trying to effectively strangle what little life she potentially had left inside of her!*

Lauren succeeded in smashing in to Cobra, but with him down on the mat he reached his legs up and wrapped up Lauren, choking her out and leaving her with only one arm effective for use. Lauren groaned and stumbled, stepping back and trying to reach up to grab hold of Cobra. Her face was red and she was clearly hurting, and acting out of desperation. Lauren leaned back trying to lift Cobra up in his current position before powerbombing her way to freedom! Lauren needed to escape as her trapped arm was incredibly hurting, and she was getting light headed!
_________________
"The Amazon" Alaina Sanders-Friction
Suzumi Ishikawa "The Tsunami"-Friction
Peggy McIntyre-Friction
Hikaru Sawazaki-Friction
Rosa "Crusher" Cabrera-Friction
"JJ" Janella Johnson-Friction
Raquel Masters-Friction
Lauren Fredericks-Friction
TAG TEAM
The Irish Amazons