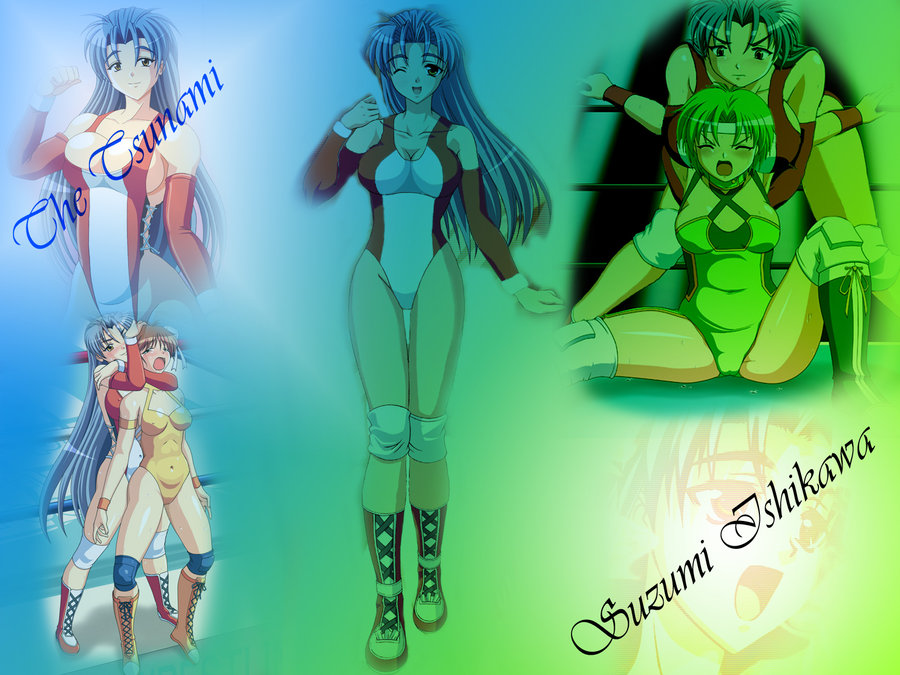 Strategy: While Suzumi can come across as an airhead to people she doesn't know inside the ring she is more cerebral than most anyone realizes.  She uses her technical skill to catch opponents with reversals and goes for the kill with submissions more often than not.
Style: Defensive/counter-attacking.  She's fair with strikes, but her bread and butter are submissions, technique and grappling.

Difficulty: Medium-hard, can be hard if her foe isn't good against submissions.  She has a lot of ring-rust to shake off after her Wrestle Angels stint.  Will she be able to recapture her in-ring mojo?

Appearance: She is fit, but not overly muscular.  Her hair is long, going down nearly to her waist.  Her bust and backside usually lead to people classifying her as curvy.  When not wrestling, she tends to wear designer clothing, which she can afford due to her old Wrestle Angel/acting career.

Suzumi grew up in Tokyo to a fairly wealthy family.  Her mother was an actress who married her agent.  The two had Suzumi and she was groomed for show business.  As a child she loved acting and participated in her school plays at every turn.  However, once she hit 10 she began to enjoy watching wrestling on TV which her parents weren't a big fan of.  This didn't stop Suzumi from taking it in every chance she got.  She loved the theatrics of it, but she also found the fighting and competition to be just as thrilling.
Once Suzumi began high school she kept up with her acting, but she also would sneak off to a wrestling gym after school.  To avoid backlash she told her parents she was at cheerleading practice.  She knew it would be fun, but she was surprised she learned it as quickly as she did.  She was as good at wrestling as she was at acting, and she'd been in plays her whole life.  As time went on Suzumi heard about a promotion called Wrestle Angels.  She saw a lot of great wrestlers in there like Thunder Ryuko, Mighty Yukiko, and Panther Risako who she wanted to go up against to test herself.  On the day of her graduation, she told her parents about her plans.  While they weren't exactly thrilled (her father took the news better than her mother) they didn't disown her or do anything drastic.  To this day her choice of career as a wrestler is just awkwardly avoided at family gatherings.
In Wrestle Angels Suzumi showed that the upstart 18 year old was more than a match for the lower card.  Upon hitting the mid-card Suzumi continued to enjoy success in some tag matches and she held one of the promotions lesser titles for a moderate title reign.  However, she hit a wall in the mid-card.  No matter how hard she tried she lost almost as many matches as she won against her equally ranked opponents and when she did fight the top-tier talent she found herself coming up short time and time again.  Two year ago, Suzumi was in a nasty match where she not only lost the match but she severely injured her leg.  After laying in the hospital bed and thinking she decided that she would leave wrestling.
For most of the last two years, Suzumi spent time acting and enjoyed it immensely.  She was already known from wrestling and the first large role she had was a successful romantic comedy.  After two more follow-up drama roles that were well received she was on her way to being an A-lister but she felt like something was missing.  One day she saw a Friction event from the AFW and knew what was missing.  Suzumi found herself going back to a wrestling gym and even though she was rusty she was still confident enough that she could wrestle again. Even if her old speed wasn't quite there.  To make up for it Suzumi took a more cerebral approach to things and found her technique to be better than it used to be.  After training for 8 months she auditioned for the AFW by beating a few other roster hopefuls.  At the end of the day, it was Suzumi Ishikawa "The Tsunami" inking another wrestling contract.  To make things even better a number of her old Wrestle Angels cohorts were also in the AFW, many on the Friction roster where she was as well!


Personality:  Suzumi can be a bit of an airhead as she only really puts thought into the very few things she cares about.  She also comes across to quite a few as something of a hot headed woman, she will not let anyone push her around and doesn't take perceived insults very well.  That being said, once she considers someone a friend she is a very loyal person.  Also because of her former work in Wrestle Angels and acting she doesn't shy away from the spotlight:  She loves it!  However, because she is famous she has the potential to appear to others as unintentionally snobby at times or overly cocky for an AFW rookie.  Obviously she wants to win like everyone else, but isn't the type to injure anyone intentionally.  However, in Wrestle Angels she had a few fierce matches and her attitude could change if she ran into an old, hated rival.

Fun Facts:
-Even though she is an athlete, she knows nothing about sports other than wrestling.
-In her spare time she enjoys TV and movies, but doesn't watch anything she was in herself.
-She doesn't like to back down from challenges in or outside the ring.  This can get her in a lot of trouble.
-She loves pizza and will request that over anything else if she has the chance.  At movie premiers people have eaten gourmet food only to see Suzumi munching on pizza delivered to the premier.

Friends/Allies:
Mikoto Kusanagi - Suzumi's best friend and girl she trained back in Wrestle Angels.  Now, Mikoto is as good.. or better than Suzumi.
Chris Morgan:  The woman who is credited with sinking Wrestle Angels and who told Suzumi that she should not risk injury... Suzumi hated her guts.  Unfortunately, the woman she hates is also one of the best wrestlers anywhere male or female.  After her match with Risako, Chris opened up about everything giving Suzumi a newfound respect for the wrestler she formerly hated.
Shibita Aruku:  A young wrestler who Suzumi is helping to train.

Rivals:
Panther Risako:  Her former role model, Panther Risako lost it after Suzumi managed to defeat her in a match.

History:
1) Angel Survivors Suzumi bumps into Mikoto, another former Wrestle Angel and the two chat and spar at the gym.... before finding out Mikoto is who Suzumi fights in her debut match.
2) Mikoto Kusanagi vs. Suzumi Ishikawa Suzumi faces her friend Mikoto in her official in-ring debut...
3) Suzumi Ishikawa vs. Chris Morgan Suzumi takes on Chris Morgan, the giant woman whom she holds responsible for the downfall of Wrestle Angels.
4) Long Time No See Suzumi trains at the gym and bumps into an old friend.... or enemy.
5) Wrestle Angel Beach Vacation Suzumi and Mikoto go to the beach to unwind, and to hunt down attractive guys..
6) Riyu Kikuchi vs. Suzumi "The Tsunami" Ishikawa Suzumi faces off against Riyu.  The two split their matches 1 to 1 in Wrestle Angels, time to see who has come further...
7) Mandated Downtime With Swimsuits  Suzumi meets a nice young man at the beach, and one thing moves to another....

Re: Suzumi Ishikawa "The Tsunami"

After a long time away from the ring and her doing some training with with Shibita Aruku, Suzumi has finally returned to the ring looking to come back with gusto! She is feeling good and eager to prove herself once again, happy to step inside the ropes with anyone willing to take her on!