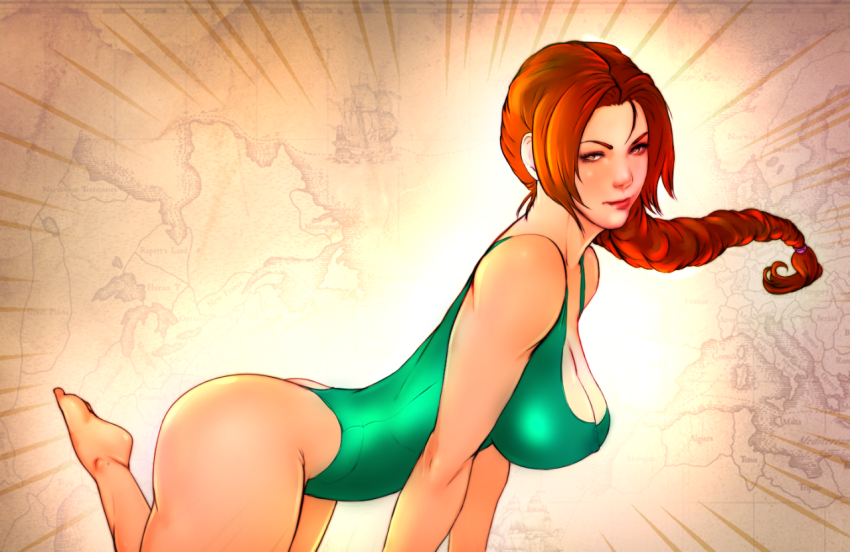 Finisher:  Luck Of The Irish- Peggy sits her opponent up on the top of the turnbuckle facing away from the ring.  She sets up behind them securing her feet around the middle rope, delivering a spider suplex to her foe before perching atop the turnbuckle to immediately follow up with a big leg drop and pin in quick succession.

Style:  Technical grappler/striker.  Peggy has a solid foundation of moves thanks to growing up around the ring, compliments of her aunt.  She favors suplexes of all varieties, and can reverse a lot of moves.  Her strikes are hard, and most importantly precise.  Strikes wear down and stun foes while her suplexes and occassional slam or submission help add more flavor to her offense before she moves in for the kill.  She prefers not to cheat, but she will if it means she will end the match with her hand raised instead of laying flat on her back.


Appearance:  Peggy’s figure is curvy, and her fitness was considered average at best for a wrestler, however training has led to a bit of a forming up of Peggy, with some defined muscle starting to appear.  She does have enough weight to pack a punch.  Combining her fair fitness with her girlish young looks, and many women tend to underestimate Peggy.  Her pretty face and bright eyes have captivated a few people before, hiding her inner intensity and drive to win.

Background Story
Peggy was born outside Dublin, Ireland and grew up in a typical middle class home.  As she grew up, she watched old tapes of her favorite aunt Velvet McIntyre in action inside a wrestling ring.  Peggy got along better with her aunt than she did with her parents, forming a special bond with wrestling at the center of that bond.  Peggy saw her aunts successes…. and failures…. as she wrestled abroad in the USA and Japan.  Peggy wanted to make her aunt proud, and show everyone that an Irish woman could hang in the ring with anyone.  As she entered highschool, Peggy trained on the side with her aunt, learning the ins and outs of the ring.  Peggy wasn’t the most physically gifted, but she picked up on the technical aspect of wrestling very quickly.  When she was 17 she wore a mask and wrestled in a part-time promotion near her home, without her parents finding out.  She quickly went on to beat the few women on the roster, as well as a couple of the men!

After graduating from high school, Peggy told her parents that she wanted to wrestle.  They weren’t exactly happy about her choice, preferring that she go to college.  Velvet supported her choice and got her a tryout for a few larger promotions.  Peggy performed well in every try out, winning the spars against other hopefuls.  A representative from AFW Friction contacted Peggy and offered her a contract, which she happily signed.  Peggy did her homework on the Friction roster, and knows that she wants to avoid hentai like the plague.  She also scouted out a couple women who have a classic or oldschool wrestling feel to them, becoming big fans of them.  In particular she likes Valley Doll, as well as both members of Sonic Boom:  Julia Rogers and ‘Amazon’ Alaina Sanders.

Peggy is a new arrival in Japan, with a rudimentary understanding of the language and its culture.  While she normally means well, she is willing to do whatever it takes to get to the top.


Fun Facts
-While Peggy wants to wrestle and make it her career, she was smart enough to heed her parents, and aunts warnings about career ending injuries.  She is enrolled in online college courses to get a degree while she wrestles.
-Peggy is proud of her skills, although dislikes it when people call her ‘soft’ for devoting less time to fitness than most wrestlers, pointing out her curvy figure.
-Peggy loves astronomy.  She will read up on news about the stars, solar system, and universe as a whole.  If wrestling fails, she wants to work for some national space program.
-Because Peggy grew up watching an older era of wrestling due to her aunt’s career being in the 80’s to early 90’s she has a more oldschool wrestling style.

Career Accomplishments
None…. yet


Friends
Julia Rogers and Alaina Sanders- Peggy watched these two and got to meet them.  She loves their style and wants to be as good as they are someday, wanting to prove she can get to that level by taking them on and coming out on top!


Rivals
Gemma Faraday- Peggy and Gemma had a contentious match, and the two talked a lot of trash... with both women taking it to heart.

Rookie Talk Peggy meets a young trainer who hopes to wrestle and they hit it off surprisingly nicely!
9) Helvetica's Hotseat Episode 3:  Gemma Faraday Peggy overhears... and interupts... an interview with Gemma!
10) The Here And Now Peggy paces backstage hoping for a match, and instead she bumps into Chloe Rodriguez...
11) Gemma Faraday vs. Peggy McIntyre: Cage Match  Peggy faces Gemma in the rubber match to decide things once and for all...

FRIENDS, ENEMIES, ETC.
Gemma Faraday- A heated rival, or she used to be.  The two had a trio of matches with Peggy only winning one, and having a new respect for Gemma.