Suzumi was backstage in her orange and white wrestling attire, tugging on the back of her swimsuit to make sure it covered everything just right. Not too much, not too little. She checked herself out in the mirror and smiled as she left the locker room satisfied that everything looked good. Her student of sorts Shibita had been on a streak lately so it was up to Suzumi to keep up with that pace!

Suzumi was facing a small, fast speedster who Suzumi was going to have to have to try to keep grounded. Luckily her submission and technical style was good at trying to force high flyers as well as powerhouses into situations they didn't find comfortable, such as her painful holds.

As her music began to play Suzumi came out and blew kisses to the crowd, waving as she strut her stuff down the ramp. She was ready to show off a bit, eager to keep her small winning streak going. She was happy to see what this woman could do in between the ropes but Suzumi was confident in her ability to take the fight to the firecracker of a rookie.
_________________
"The Amazon" Alaina Sanders-Friction
Suzumi Ishikawa "The Tsunami"-Friction
Peggy McIntyre-Friction
Hikaru Sawazaki-Friction
Rosa "Crusher" Cabrera-Friction
"JJ" Janella Johnson-Friction
Raquel Masters-Friction
Lauren Fredericks-Friction
TAG TEAM
The Irish Amazons

Nidia Roja could practically feel her body vibrating in excitement as she waited for her turn to enter the ring. She had finally made it to the big leagues and management was quick to send her up against one of the veterans of the business. Nidia actually saw some of her matches on the way here and she knew she was in for a rough time.

That didn’t mean the luchadora was going to give up already though. Oh no, if anything. This fact only made her more determined as she intends to impress both those up top but also Suzumi with her skill as a wrestler. Nidia doubted that she was good a technician as her opponent, but she was certain that she had the advantage in agility. 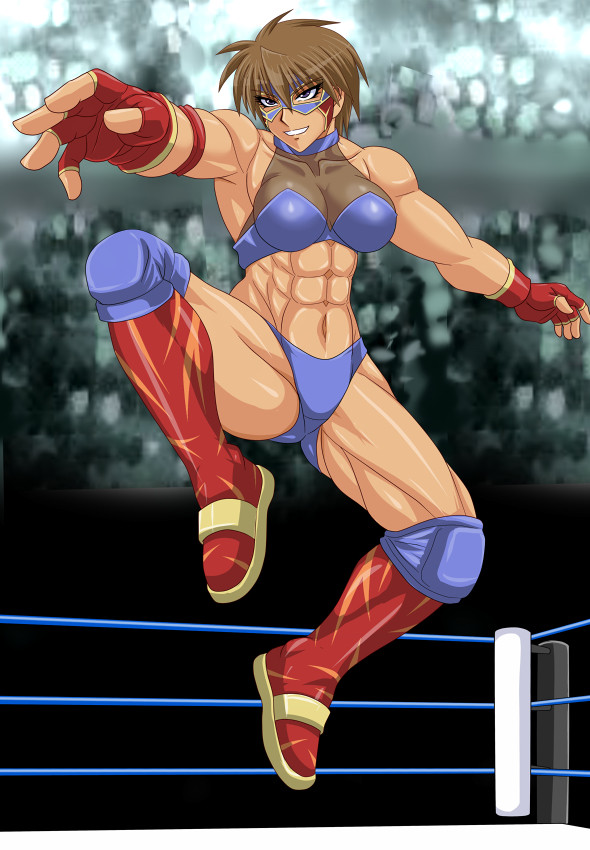 She was shaken out of her tactical reverie when she felt someone tap her shoulder. The techie rolled his eyes and pointed. It was then that Nidia realized that her music was starting. With a shout of thanks, Nidia would dash through the curtain and into the arena. The screams were overwhelming and Nidia couldn’t stop herself from smiling brightly as she made her way down. High fiving those she passed before finally reaching the ring. There she hopped up onto the apron before using the ropes to springboard herself into the ring.

“H-hey! I just wanted to say that I’m a huge fan. And I hope we can have a good match!” she said, ready to get her debut underway.

Suzumi saw Nadia making her way to the ring and she stood with a focused look on her face as Nadia entered. The smaller grappler was a ball of energy and it doubled down on the tsunami's desire to keep things grounded in the match. Suzumi smiled when Nadia said she was a fan, appearing to be genuine. "Thanks! I am totally sure we will have a great match! Good luck!" Suzumi said as she stuck her hand out for a handshake.
_________________
"The Amazon" Alaina Sanders-Friction
Suzumi Ishikawa "The Tsunami"-Friction
Peggy McIntyre-Friction
Hikaru Sawazaki-Friction
Rosa "Crusher" Cabrera-Friction
"JJ" Janella Johnson-Friction
Raquel Masters-Friction
Lauren Fredericks-Friction
TAG TEAM
The Irish Amazons

Nidia was quick to accept the handshake. Her excitement overshadowing the nervousness that was welling inside of her. This was her debut, and she didn’t want to screw it up. Releasing her grip of Suzumi’s hand Nidia backed away with a smile on her face. ”Let’s get started then! But you better be ready! I may be a rookie but I have no intention on going easy on you ok!” she called to her as the bell finally rang and the luchadora crouched down into her stance.
_________________
RINGROPES RINGROSTER
https://www.afwrpg.com/t20768-ringropes-ringroster#552569

Suzumi saw Nidia getting ready and she crouched low as well circling the debuting rookie as the bell rang. Suzumi moved slow at first before moving in to try to engage Nidia in a grapple! Suzumi figured she could hold her still and work Nidia into a couple simple holds. The tsunami tried to switch from a grapple to a standing side headlock, squeezing away at the head of Nidia to start things off favorably.
_________________
"The Amazon" Alaina Sanders-Friction
Suzumi Ishikawa "The Tsunami"-Friction
Peggy McIntyre-Friction
Hikaru Sawazaki-Friction
Rosa "Crusher" Cabrera-Friction
"JJ" Janella Johnson-Friction
Raquel Masters-Friction
Lauren Fredericks-Friction
TAG TEAM
The Irish Amazons

The bell was rung and the match was underway. Nidia quickly crouching into her stance as she and her opponent gauged at each other. When she saw Suzumi offer her hands for a lockup, she was quick to agree. But before she could lock horns so to speak, her opponent shifted her stance and locked the luchadora in a headlock. Not willing to let her opponent get an advantage this early on, Nidia would try to drop to her knees and pivot to the side in an attempt to toss Suzumi over her shoulder!
_________________
RINGROPES RINGROSTER
https://www.afwrpg.com/t20768-ringropes-ringroster#552569

Suzumi felt Nidia shift and send Suzumi flying, smashing her back to the mat! Suzumi grunted and moaned as the impact was far from pleasant but she wanted to keep this smaller grappler grounded somehow! Suzumi was near enough to Nidia so she tried to kick her legs out, attempting to salvage her position by wrapping Nidia up in a body scissor hold with her legs, using her strong thighs to squeeze away at the torso of her opponent!

Suzumi wanted to keep her still, wear her down and grind away. It was sort of odd that her approach was the same for extremely fast wrestlers as it was for large powerhouses but this was how Suzumi planned on keeping control of the tempo, forcing Nidia into the technical playground Suzumi was good at.
_________________
"The Amazon" Alaina Sanders-Friction
Suzumi Ishikawa "The Tsunami"-Friction
Peggy McIntyre-Friction
Hikaru Sawazaki-Friction
Rosa "Crusher" Cabrera-Friction
"JJ" Janella Johnson-Friction
Raquel Masters-Friction
Lauren Fredericks-Friction
TAG TEAM
The Irish Amazons

Nidia’s toss worked! She felt the ring shake as her opponents back hit the canvas. The luchadora was already on the move with getting back to her feet, when she suddenly felt a pair of legs slither around her waist. She had underestimated Suzumi’s recovery time and was now paying for it when she felt those legs begin to squeeze.

“Agh! Ngh!” Nidia grunted as her arms moved to try and pry Suzumi’s legs off. She had even resorted to attempting to punch her legs and abdomen to get herself free. If none of those worked however, then Nidia would need to get creative.

Twisting her body, Nidia would force the two of them to roll onto their bellies. If all went well, then the luchadora would grab Suzumi’s legs and begin to crawl backwards. In doing so, she would reverse the body scissors, into a Boston crab!
_________________
RINGROPES RINGROSTER
https://www.afwrpg.com/t20768-ringropes-ringroster#552569

Suzumi kept squeezing away until she was rolled over and felt what Nidia was doing. For a wrestler who seemed to be more of a flashy flyer she was proving to be incredibly technical! Suzumi groaned as the Boston crab was locked in and she was in some serious pain. However Suzumi didn't want to be beat at her own game by a wrestler making her debut.

Suzumi tried to thrust hard to the side with her whole body to send them both onto the mat on their sides while pulling her legs away from Nidia. Suzumi would then try to scramble back up to her feet and look to grapple with the rookie once more.
_________________
"The Amazon" Alaina Sanders-Friction
Suzumi Ishikawa "The Tsunami"-Friction
Peggy McIntyre-Friction
Hikaru Sawazaki-Friction
Rosa "Crusher" Cabrera-Friction
"JJ" Janella Johnson-Friction
Raquel Masters-Friction
Lauren Fredericks-Friction
TAG TEAM
The Irish Amazons

Nidia may have been a more high flying type of wrestler. But that didn’t mean she practiced the basics! She knew she would need them for all the types of fighting styles wrestlers around the world used. So twisting back, Nidia reversed the body scissors she was trapped in and turned it into a Boston crab.

Though before she could put too much effort into it, the luchadora was suddenly bucked off. Stumbling forwards, Nidia managed to catch herself on the ropes and turn around. Just in time for her to see Suzumi get back to her feet. Nidia wasn’t as confident on grappling with her a second time to work out for her. But the ropes gave her an idea.

Without warning, Nidia shot forwards and straight towards her opponent. But instead of impacting against her, she instead ran past. Before Suzumi could realize what was happening, Nidia would jump into a handstand and let her legs bounce off the ropes. With the new momentum she had gained, the luchadora would jump back and send a backwards pelle kick straight for Suzumi’s head!
_________________
RINGROPES RINGROSTER
https://www.afwrpg.com/t20768-ringropes-ringroster#552569