*Desperately clinging his thighs against Lauren's neck like a kudzu vine, Cobra was wholeheartedly intent upon utilizing his backside as an anchor weight to keep her grounded. However, against all odds, she managed to power through his breathtaking submission!*

"T...that'sssss imposssible!" *His flabbergasted cry generated no sympathy from the astonished onlookers, as his body was thrusted skyward only to plummet back down to earth with a massive* "THWUNK!" *Accompanying it!*

"Nngghh!" *The tangible impact sent a ripple of immobilizing pain throughout his frame, rendering him temporarily immobilized and at the mercy of the tenacious blonde!*

Lauren didn't utilize the power bomb often but it felt right at this moment. She had Cobra down again and leapt up into the air trying to crash down on top of Cobra with a leg drop! If Lauren could connect this she would immediately transition into a pin to try to put Cobra away right here. Lauren was hurting from Cobra's offense hammering her so she had to go for a win soon otherwise she was going to be in trouble!
_________________
"The Amazon" Alaina Sanders-Friction
Suzumi Ishikawa "The Tsunami"-Friction
Peggy McIntyre-Friction
Hikaru Sawazaki-Friction
Rosa "Crusher" Cabrera-Friction
"JJ" Janella Johnson-Friction
Raquel Masters-Friction
Lauren Fredericks-Friction
TAG TEAM
The Irish Amazons

*While his body convulsed and twitched from the unprecedented impact he had sustained, Cobra's experience with Lauren had just gone from bad to worse when she decided to take flight, dropping her leg across his vulnerable throat for a agonizing leg drop!* "GGRRRHH!" *The tangible pain he suddenly found himself in was enough of a diversion for the energized blonde to snag him within a rollup pin!* 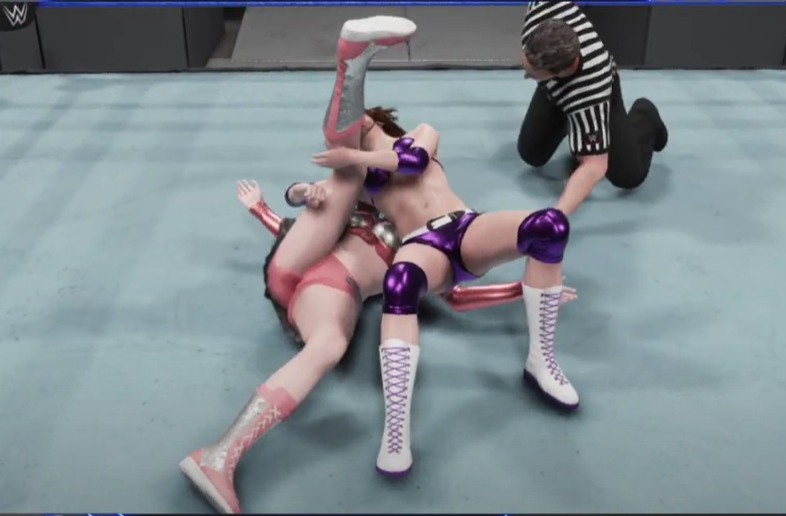 "ONE!" *The official slapped the ground, sending a tremor across the ring which ended up snapping Cobra out of his prostrated state of mind.* "W..what'ssss...!?!" *Quickly realizing what was about to transpire, as the referee reached* "TWO!" *He thrusted himself upwards, effectively breaking the hold!*

"N..niccccce try Lauren~" *Recoiling from around the voluptuous amazon's immediate proximity, Cobra created a gap of distance while gradually returning to his feet, both competitors back on even, albeit exhausted, feet.* "We're not finished jusssst yet, however~"

Lauren felt Cobra kick out and slapped the mat in frustration, hoping that she had just put him away. As she staggered up to her feet she tried to lunge in, lifting her leg to aim a big boot at his chin! Lauren was hoping to keep hammering Cobra not wanting to see him regaining any momentum. She knew that it would only end badly if he managed to re-take control of the match so she wanted to prevent that as much as she could.
_________________
"The Amazon" Alaina Sanders-Friction
Suzumi Ishikawa "The Tsunami"-Friction
Peggy McIntyre-Friction
Hikaru Sawazaki-Friction
Rosa "Crusher" Cabrera-Friction
"JJ" Janella Johnson-Friction
Raquel Masters-Friction
Lauren Fredericks-Friction
TAG TEAM
The Irish Amazons

*Quietly gauging the flow of the match, Cobra slowly began to realize that while both himself and Lauren had been pushed to their absolute limits, he had just enough left in the tank to potentially catch her by surprise. Recognizing that her footing was slightly off kilter, he decided to roll the dice and put his plan into motion!*

*Swerving out of the way of her gigantic boot, just narrowly avoiding a catastrophic amount of damage in the process, the auspicious viper would subsequently snatch the supple blonde by the fringes of her hair before immediately smashing her facial region with his forearm, hoping it would send her staggering towards the ropes!*

Lauren was off balance as the big boot missed, putting Cobra in the perfect spot to hammer away at the big woman. That is precisely what he did as well! Lauren's head took a hard shot and while on one steady leg the strike ended up sending her falling back on to the mat, landing flat on her back. Lauren groaned and shook her head, in a momentary daze as the strike to her head did exactly what it was intended to do leaving her in dire straits.
_________________
"The Amazon" Alaina Sanders-Friction
Suzumi Ishikawa "The Tsunami"-Friction
Peggy McIntyre-Friction
Hikaru Sawazaki-Friction
Rosa "Crusher" Cabrera-Friction
"JJ" Janella Johnson-Friction
Raquel Masters-Friction
Lauren Fredericks-Friction
TAG TEAM
The Irish Amazons

*As the thunderous* "WHAP" *Sent shockwaves throughout the landscape of the AFW arena, Cobra triumphantly watched as his victim toppled over, inevitably crumbling from the superfluous amount of anguish she had sustained. Despite this however, Cobra was hellbent on finishing this grueling skirmish the most effective way he knew how!*

"Oh no, we're not finished jussst yet~" *With a spontaneous burst of energy, the ecstatic viper shot forward, reaching downwards to drag Lauren back to her feet.* "Thisssss was fun while it lasted, but it's lasssted long enough!" *Propping her atop his shoulders, he would look to smash her into the flooring while crossing his legs over her throat for his signature move: The Bolt Tremor!*

Lauren was dead weight as Cobra grabbed hold of her pulling her to her feet then lifting her up. Lauren was up in the air before the hard crashing down to the mat came and Lauren let out a loud scream as she was smashed down to the mat! "AAAARRRRRGGGGGGHHHHHHHHH!" Lauren howled as she flopped on the canvas, the ring rides still shaking from the impact. Lauren flailed her limbs weakly as she was in no shape to be able to fight back as she was being tossed about.
_________________
"The Amazon" Alaina Sanders-Friction
Suzumi Ishikawa "The Tsunami"-Friction
Peggy McIntyre-Friction
Hikaru Sawazaki-Friction
Rosa "Crusher" Cabrera-Friction
"JJ" Janella Johnson-Friction
Raquel Masters-Friction
Lauren Fredericks-Friction
TAG TEAM
The Irish Amazons

*As the initial portion of his gratuitously violent finisher reached its terminus, Cobra seamlessly transitioned into the second phase of his move, primarily consisting of crossing his legs against Lauren's throat to try and strangle her out cold!*

"You have two choicessss~" *He began while starting to stretch her dangling legs apart with the palms of his hands.* "Either tap, nap, or ssssnap. I'm being courteoussss and allowing you to decide!" *The snarky snake declared, amplifying the pressure against her thighs and throat as the seconds transformed into minutes!*

Lauren gagged, choking out screams of pain as she kicked her legs, thrashing her arms about as she was stuck in this hold! She held out as long as she could before she began feverishly tapping out, submitting to the hold. She had just submitted to Cobra and her red face was one of pain, lack of air and a bit of embarrassment as she really had hoped to walk away with a win tonight.
_________________
"The Amazon" Alaina Sanders-Friction
Suzumi Ishikawa "The Tsunami"-Friction
Peggy McIntyre-Friction
Hikaru Sawazaki-Friction
Rosa "Crusher" Cabrera-Friction
"JJ" Janella Johnson-Friction
Raquel Masters-Friction
Lauren Fredericks-Friction
TAG TEAM
The Irish Amazons

Similar topics
» Lauren Summers
» Brittany vs Lauren
» Fangs for the fight- Cobra(D) vs Haru!
» Flips and Kicks- Cobra vs Dmitri!
» Fangs and Fists- Cobra vs Gai!