Search
Latest topics
» An Unexpected Stipulation
by Underdog21 Today at 3:02 am

Alaina vs. Echo: Rookie takes on an Amazon

Alaina vs. Echo: Rookie takes on an Amazon

Alaina was dressed in her tiger print one piece swimsuit, kneepads and boots backstage as she stretched a bit before her match. She was taking on a rookie but she had learned the hard way not to sleep on new women. They were hungry to make an impact. Alaina had to prevent that from happening.

As she finished her stretches she heard her music play and the smiling amazon went out into the arena, waving as she appeared. Alaina high fives fans as she made her way down the ramp, picking up speed before sliding underneath the bottom rope to enter the ring.

Backstage, Echo Alexandria paced back and forth, bare feet clapping on the concrete, taking deep, short breaths, shaking her hands and adjusting her wrist straps and knee pads. She was nervous, very nervous. This was her debut match, her very first professional match ever. Not just trainers, not just sparring with family members, but a real, official match, and it was in the biggest wrestling league of them all, the grandest stage possible.

She was excited. Nervous. Proud. Terrified. She had been trained to wrestle since she was a child, and now, at just 18 years old, she was going to carry on the family legacy of proud wrestlers, the bloodline of greek fighters flowing through her veins, and what's more, she had heard her opponent was one of the leagues biggest and most famous stars, a former champion to boot! What luck for her victorious debut!

Finally, she heard her music play, and it was time to walk through that curtain and reveal herself to the world. 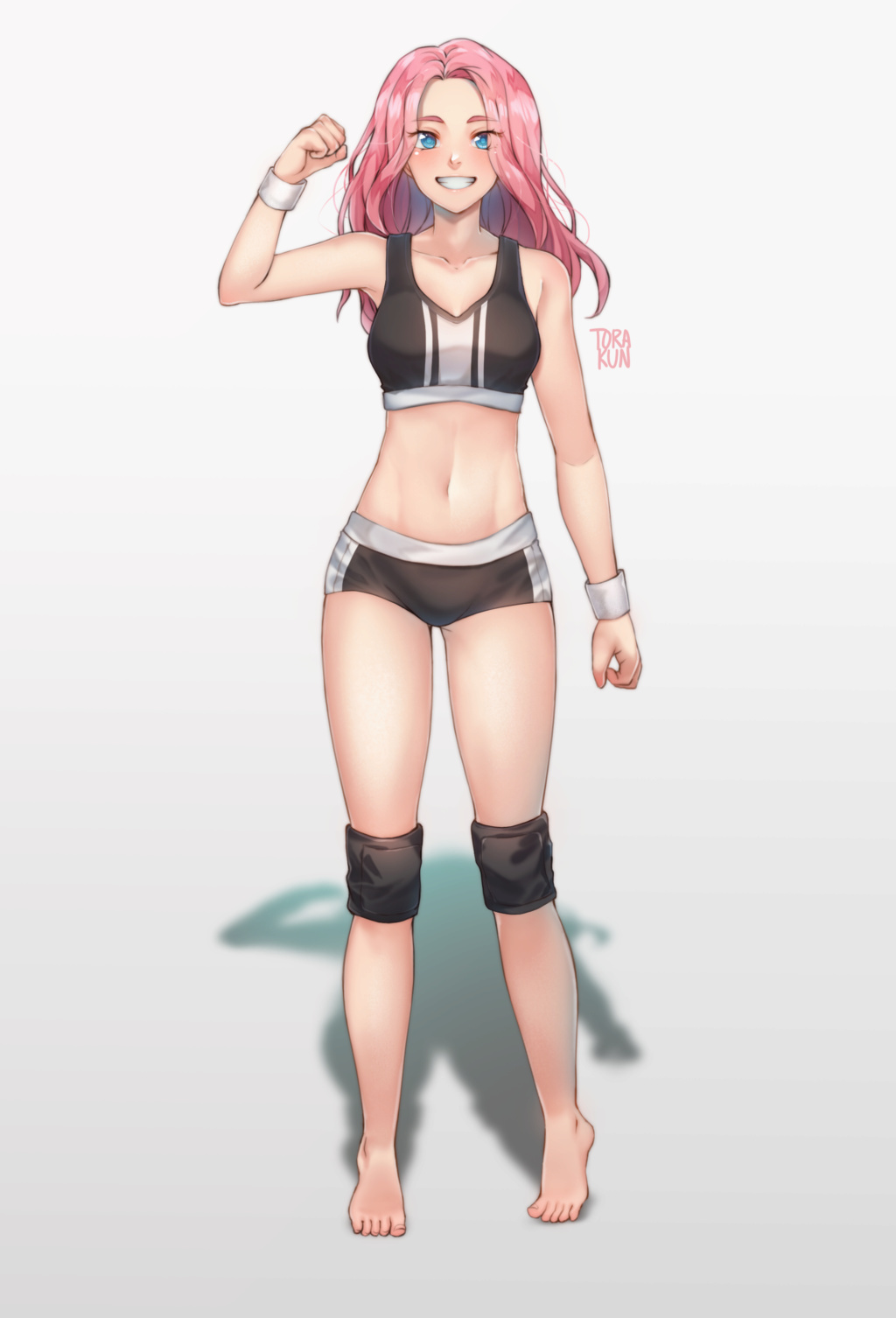 Stepping out onto the ramp, her bare feet touching the cold steel, the pink haired Greek girl looked out onto the crowd, jaw dropping at the sight of just how large the arena was, how many people were in attendance. She felt her body shiver a little...but took a few deep breaths, summoning her courage and driving down her nerves, raising her hand up as she made her way down the ramp, getting a somewhat polite applause from some of the crowd, most responding with indifference.

That was fine, they would all see how amazing the Alexandria lineage would be! Getting into the ring, Echo climbed the turnbuckle, raising her arms up before hopping down and pointing at her...larger and more muscular opponent.

"You there! I am Echo Alexandria! I am the 5th generation wrestler of the Alexandria line! It is an honor to compete against another warrior, but for the honor of my family, I will start my career and legacy in this league by defeating you!"

Alaina watched as the very young woman came down to the ring full of energy. Alaina used to be like that when she began her career. She was 25 when she started wrestling in AFW but now at 30 she felt like something of an older wrestler. Not quite an old lady but close to it. She kept her eyes on Echo as she entered the ring, nodding along as she listened to the teenagers speech. "I am flattered that you think so highly of me Echo but you won't be leaving here with a win tonight." Alaina said with a shrug, confident in herself.

She held out her hand for a handshake before backing off a couple steps, waiting for the bell to ring. Once the bell rang Alaina waste no time moving in as she ran in to try to grab hold of Echo in a grapple! Alaina's only aim was to tie up the young woman to keep her still, making her an easy target for a big knee strike to the abdomen!
_________________
"The Amazon" Alaina Sanders-Friction
Suzumi Ishikawa "The Tsunami"-Friction
Peggy McIntyre-Friction
Hikaru Sawazaki-Friction
Rosa "Crusher" Cabrera-Friction
"JJ" Janella Johnson-Friction
Raquel Masters-Friction
Lauren Fredericks-Friction
TAG TEAM
The Irish Amazons

Echo reached out, politely shaking Alaina's hand. The way she shrugged her off so easily didn't phase her. Alaina was a veteran here, a former champion, she had earned the right to be confident in herself. But Echo was confident in herself and her abilities as well, and she had full faith that she would take this bigger woman down for her first ever victory!

Perhaps a little TOO confident actually, as, once the bell rang, the barefoot teenager eagerly closed the distance and accepted Alaina's grapple, eagerly pushing against her with all she had, driven to prove herself against the bigger, and probably stronger woman...and as a result, had a hard knee driven right into her lower gut, her eyes widening as she took her first ever strike from a legit opponent, the blow making her gasp and break the grapple, taking a step back while holding her gut, trying to get her breath back!
_________________
Check out the recently revamped Roster Page, now with pics!

Alaina watched as Echo took the hit and staggered back, knowing that she landed a solid knee. As Echo staggered the amazon would spring forward at her as quickly as she could, rushing right at the young woman! Alaina extended her arm and tried to crash into Echo with a running clothesline to follow up her knee strike!
_________________
"The Amazon" Alaina Sanders-Friction
Suzumi Ishikawa "The Tsunami"-Friction
Peggy McIntyre-Friction
Hikaru Sawazaki-Friction
Rosa "Crusher" Cabrera-Friction
"JJ" Janella Johnson-Friction
Raquel Masters-Friction
Lauren Fredericks-Friction
TAG TEAM
The Irish Amazons

Well, not the best way to start things off, the greek teenager getting her very first taste of pro wrestling via knee to the midsection. Still, she was prepared for this, she knew she would be taking hits, as everyone did. The important thing was just to get back up!

She did just that, forcing herself to stand straight up again to confront her opponent...and promptly got knocked right back down, a hard clothesline slamming into the girls chest and dropping her to the mat, with enough force to send her bare legs kicking up into the air before falling flat, Echo coughing and sputtering before rolling over to try and push herself back up to her feet.

Alaina successfully sent Echo down to the mat, and wanted to keep her momentum rolling. She made her way back over to Echo as she rose to her feet, grabbing hold of the woman once more. Alaina tried to hammer her abdomen with a couple hard body punches before wrapping an arm around Echo's head. The amazon was intent on lifting Echo up for a vertical suplex but she would show off a bit, holding Echo straight up, even taking a hand away to keep her held while flexing her free arm! Alaina intended to spin around a couple times to show off her power before sending Echo crashing down to the mat as hard as she could.... provided the showboating didn't come back to bite her!
_________________
"The Amazon" Alaina Sanders-Friction
Suzumi Ishikawa "The Tsunami"-Friction
Peggy McIntyre-Friction
Hikaru Sawazaki-Friction
Rosa "Crusher" Cabrera-Friction
"JJ" Janella Johnson-Friction
Raquel Masters-Friction
Lauren Fredericks-Friction
TAG TEAM
The Irish Amazons

Echo managed to get back to her feet, rubbing her stomach. Things were fine, she could get right back into the swing of things, this was just a temporary setback was all. She was Echo Alexandria, it would take more than a few hard hits from some muscle bound meat head to take her down!

Of course, Echo wasn't about to prove that anytime soon, as the next thing she knew, she was taking a couple hard punches to her still sore stomach, making her gasp and leaving her wide open for the follow up suplex.

That's where things got embarrassing, as Echo was held straight up, her light body going up and being held with ease by the powerful Amazon, Echo starting to realize just why the woman had earned that name as she kicked her bare legs in the air, whining as the woman toyed with her. "Lemme down! Lemme down!" she protested, face starting to turn red as the blood rushed to her head, the crowd whistling and applauding in Alaina's display of sheer strength.

Finally, Alaina did as requested, dropping Echo onto her back, the powerful suplex jarring the pink haired rookie, who groaned on the mat as she held her sore back, getting her cute little butt kicked so far!
_________________
Check out the recently revamped Roster Page, now with pics!

Alaina managed to send Echo crashing down to the mat, and the confident young woman appeared a bit less so given how the match had started. Alaina was feeling it and tried to keep her momentum going for the moment. Grabbing Echo by the arm the amazon tried to twist her torso and whip Echo towards the ropes as hard as she could! If she could pull this off without a hitch then the amazon would give chase as soon as Echo hit the ropes, extending her arm and trying to crash in to the rookie with a running clothesline! It wasn't the most glamorous move but it would be effective provided Echo didn't move out of the way or otherwise counter what Alaina had in mind!
_________________
"The Amazon" Alaina Sanders-Friction
Suzumi Ishikawa "The Tsunami"-Friction
Peggy McIntyre-Friction
Hikaru Sawazaki-Friction
Rosa "Crusher" Cabrera-Friction
"JJ" Janella Johnson-Friction
Raquel Masters-Friction
Lauren Fredericks-Friction
TAG TEAM
The Irish Amazons

The blood had rushed all the way to Echo's head, turning the pink haired girls face red before she finally dropped. She was given zero recovery time however, as she found herself pulled up to her bare feet, and, in seconds, thrown across the ring to bounce off the ropes, trying to formulate some kind of counter of some kind to the onslaught so far.

Alaina didn't give her time though, as, as soon as she hit the ropes, she caught a brief flash of tiger print, before the former Entropy Champion nailed her with a hard clothesline while her back was against the ropes, causing the rookie to fall back, actually flipping backwards over the ropes and, after bouncing off the ring apron, landing flat on her front on the floor outside the ring, the impressive power display getting roars of approval from her fans!
_________________
Check out the recently revamped Roster Page, now with pics!