Sasuke Jackson vs Alaina Sanders! The Blue Dragon vs The Amazon!

Sasuke Jackson vs Alaina Sanders! The Blue Dragon vs The Amazon! 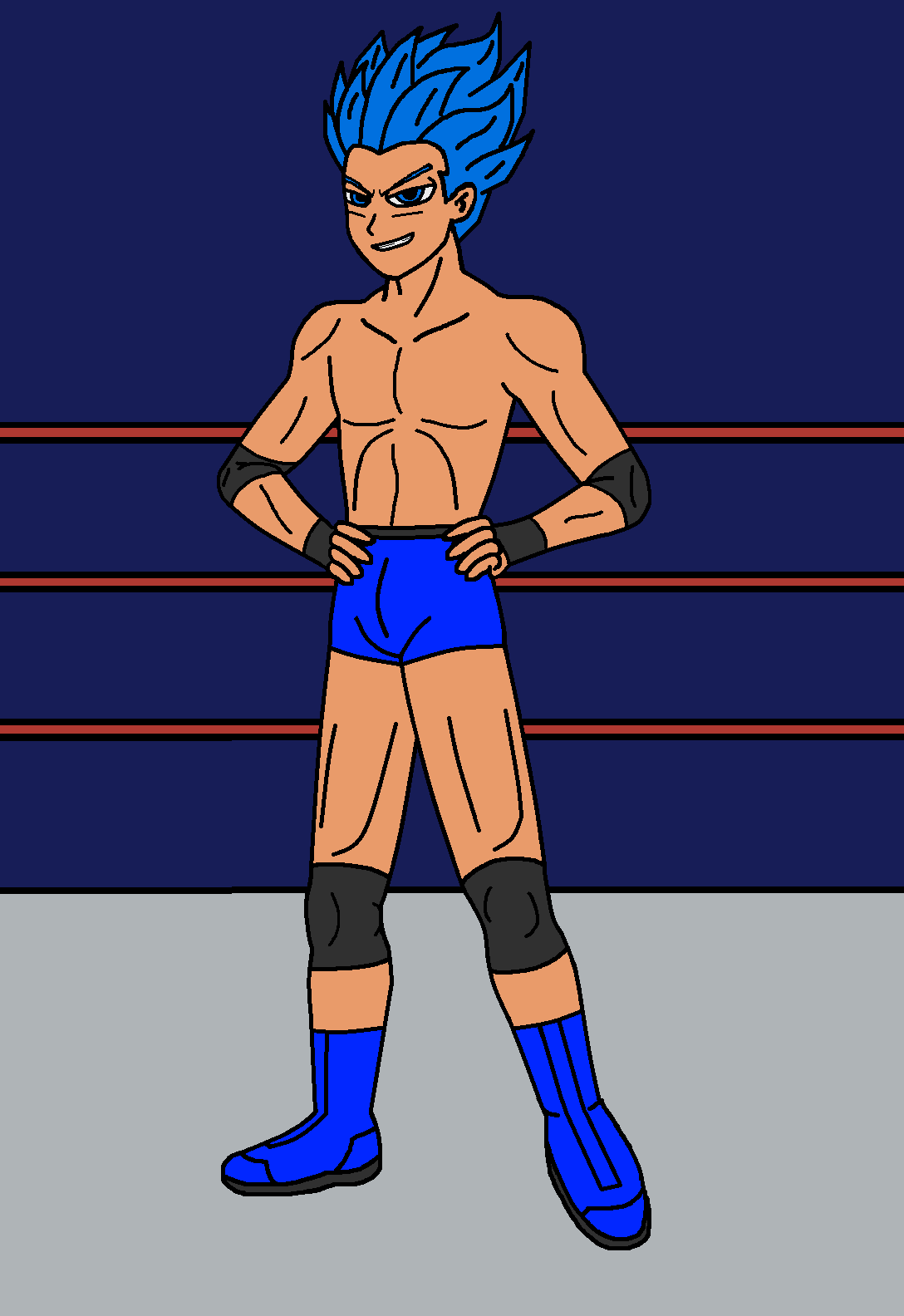 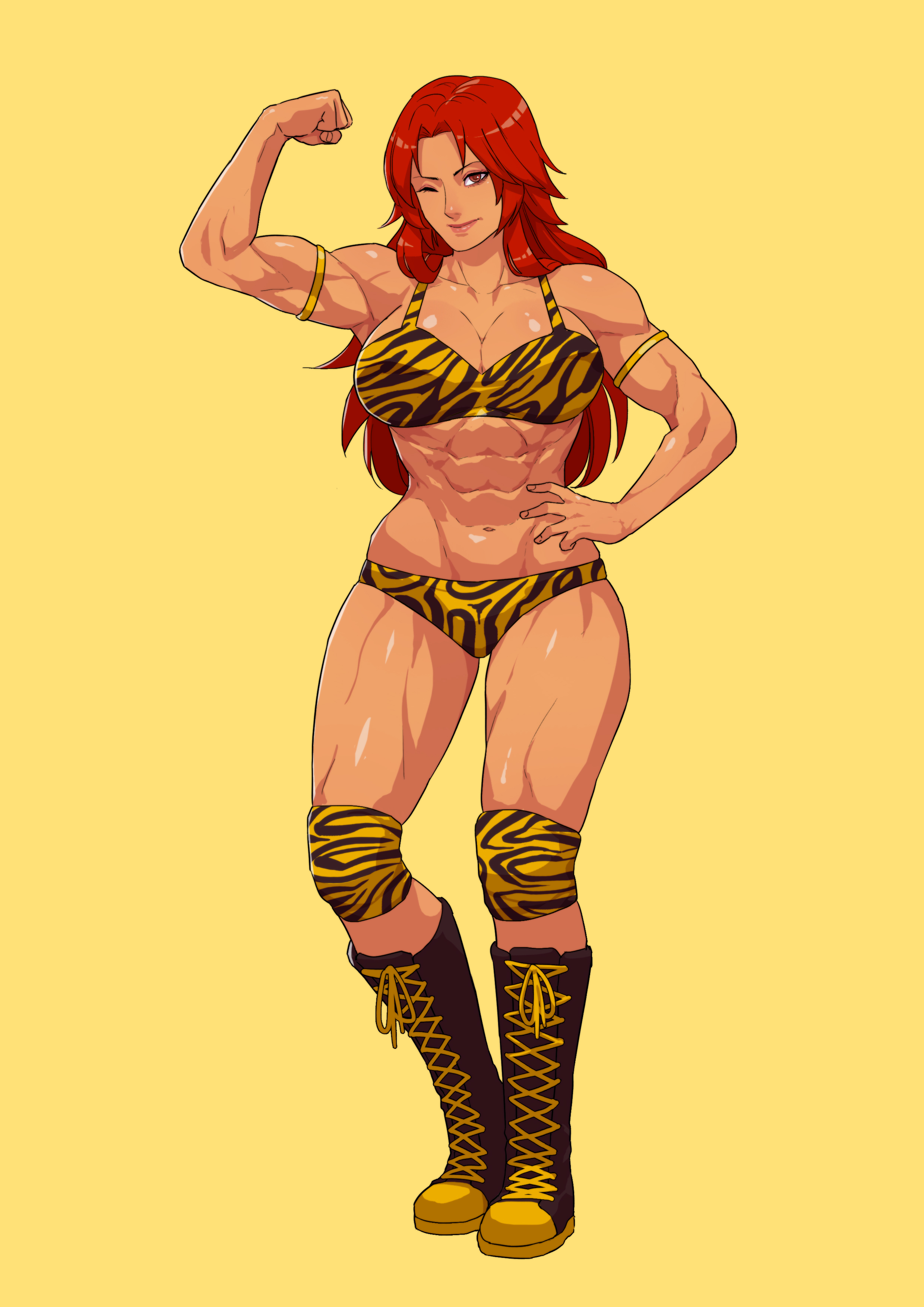 Never excites him more than fighting against a strong opponent! Because not only is it fun but also satisfaction he gets from beating said strong opponent is an amazing rush! So while some might have let nerves to get to them in this situation Sasuke was thriving off it and could hardly wait as he stood in his locker room wearing his usual attire of blue shorts, blue boots, black wrists bands, elbows and knees pad.

Sasuke walks out of his locker room to the hallways where he made his way to the gorilla position. Once there he waited for his cues and he heard it when the ring announcer calls out his name and his entrance theme: 2 Bad by Michael Jackson plays throughout the speaker loudly. Sasuke eagerly walks out from the behind the curtain to the entrance ramp!

He would receives his usual mixed reactions of cheers and boos before walking down the ramp with a cocky smile on his face. And when he makes it the ringside arena he would climb up the steel steps and enter the ring through the middle rope. There Sasuke would walks around, striking his pose for the cameras before walking the nearest corner and waiting for his opponent to arrive.
_________________
Double T

It seemed as though suddenly everyone wanted a shot at Alaina. Having one of the two top titles in the company would do that for her. Tonight was surely a non-title match as she was facing a male, although the Friction champion was going to come out and show the world why she was the Friction Champion. Clad in her two piece tiger print attire the amazon soon came out into the Tension arena, a visiting champion taking on a male Tension wrestler.

The crowd went wild as Alaina came out holding her title belt high before marching down to the ring, waving to fans and looking very confident in herself tonight. She walked up the ring steps before climbing through the ropes, holding her title high once more before handing it off to the referee. Alaina bounced back and forth on her feet in the center of the ring looking very ready to start this match off. Just because she was a woman didn't mean she could outright power her way through men just as easily as she did women.
_________________
"The Amazon" Alaina Sanders-Friction
Suzumi Ishikawa "The Tsunami"-Friction
Peggy McIntyre-Friction
Hikaru Sawazaki-Friction
Rosa "Crusher" Cabrera-Friction
"JJ" Janella Johnson-Friction
Raquel Masters-Friction
Lauren Fredericks-Friction
TAG TEAM
The Irish Amazons

Sasuke would observes his opponent, Alaina Sanders, as she walks the down ramp and into the ring. There were several things Sasuke notices about her, like her good looks. Her huge busty breasts and shapely round ass that was covered by tiger print top and bottom. Her arms and legs were thick and muscular. Her rock hard abs. And the Friction World Championship she was holding up for all to see before giving it to the ref and going to the center of the ring. Seems someone is ready for this.

But this is the part where Sasuke usually give his opponent a warning about if they were weak and suggest that they leave if they are. Sasuke wasn't gonna do that since he knew Alaina was going to be strong so he eagerly walked to the center of the ring with Alaina! "By the looks of ya and that world championship you got that you're gonna be very strong. Which means defeating you is gonna to be all the more satisfying!" He cockily stated with a cocky grin and smug on his face.
_________________
Double T

Alaina heard the cocky man speak and she stood with her hands on her hips, shaking her head. "I am the champion for a reason. I am going to show you just how capable I am in the ring and when I stand over you as the bell rings you will realize how wrong you are right now." Alaina said as she stepped up to the middle of the ring.

The bell rang and Alaina lunged right at Sasuke, extending her arm and looking to crush him at the opening bell with a hard clothesline that would send him crashing down to the canvas!
_________________
"The Amazon" Alaina Sanders-Friction
Suzumi Ishikawa "The Tsunami"-Friction
Peggy McIntyre-Friction
Hikaru Sawazaki-Friction
Rosa "Crusher" Cabrera-Friction
"JJ" Janella Johnson-Friction
Raquel Masters-Friction
Lauren Fredericks-Friction
TAG TEAM
The Irish Amazons

"A response I expect no less from the champion of course. But it's gonna be you who realize how wrong you were." Sasuke gives another cocky and arrogant statement to Alaina before getting into a ready stance, and then soon the bell rang! Sasuke was looking to start off the match with the classic collar to elbow lockup but The Amazon had other ideas though...

As she quickly lunged at him with her arm extended out and looking clobber him down with a clothesline! Though fortunately Sasuke was able to tense up and prepare himself for the blows. And when the thick muscular arm of Alaina connected to his chest, it only managed to knock Sasuke back a few feet...but boy...did it hurt as it left a clear bright red mark on his chest.

"Not bad but...is that all you got?" Sasuke cockily said despite the stinging he was feeling in his chest before lunging at Alaina and looking to hit her with a powerful elbow strikes to the head!
_________________
Double T

Alaina looked on in shock at her clothesline didn't absolutely level the man as she had smashed much larger opponents down to the mat with such offense. Shaking her head Alaina let out a howl, happy to show Sasuke that being cocky was not going to do him any favors! She stepped back up with another clothesline this time leaping into the air as she looked to crush him with a lariat to show him that she was not to be taken lightly, and that her nickname was earned as she felt she was the stronger wrestler in the ring!
_________________
"The Amazon" Alaina Sanders-Friction
Suzumi Ishikawa "The Tsunami"-Friction
Peggy McIntyre-Friction
Hikaru Sawazaki-Friction
Rosa "Crusher" Cabrera-Friction
"JJ" Janella Johnson-Friction
Raquel Masters-Friction
Lauren Fredericks-Friction
TAG TEAM
The Irish Amazons

"Gah! Ahhh..." Sasuke grunts and groans when his back slammed against the hard mat and not to mention his chest was burning with a stinging pain as it became even redder made the stinging pain worse.
_________________
Double T

Alaina took Sasuke down and wanted to show off more of her raw strength against him. She bent down deadlifting him up off the mat and holding him high before stepping forward to deliver a back breaker! Alaina wanted to take advantage of the situation trying to really get rolling to put Sasuke down. She aimed to keep building her momentum and so far she was able to land a string of moves, something she hoped to continue doing!
_________________
"The Amazon" Alaina Sanders-Friction
Suzumi Ishikawa "The Tsunami"-Friction
Peggy McIntyre-Friction
Hikaru Sawazaki-Friction
Rosa "Crusher" Cabrera-Friction
"JJ" Janella Johnson-Friction
Raquel Masters-Friction
Lauren Fredericks-Friction
TAG TEAM
The Irish Amazons

Failing to connect with an elbow strike to his opponent's head Sasuke finds himself laying on his back against the mat after Alaina landed another powerful clothesline to his chest, making the red mark he already had on it from her previous clothesline even redder! Now Sasuke was hissing in pain as he rubs the red mark on his chest, trying to ease the pain. But sadly for him, Alaina wasn't just gonna watch him recover.

So she bent down and deadlifted the two hundred three pounds man in the air with ease! "What the--?! H-Hey! Put me down now! Put me down!" At first was shocked with easily the woman was about to pick him up, it was rare for that to happen to him, but he quickly snaps out of his shock and demand Alaina to put him down as he struggles in her grips...But in hindsight he should have been careful what he demanded as...

"GUH!" Cries out Sasuke as his back slams into Alaina's knee with a backbreaker! The pain felt like he was getting stabbed in his spine! Sasuke rolls off of Alaina's knee and onto the mat on his side where he arched his back while he writhes in pain, which left defenseless him to the Amazon again.
_________________
Double T

Alaina was off to a dominant start, eager to keep up the pace to show the Tension crowd what a Friction champion was fully capable of! She had Sasuke down on the mat and wanted to keep him there leaping up and flipping to come crashing down on top of Sasuke with a standing moonsault! She wouldn't bother going for a pin at the moment because she knew he would kick out, but the force of her crashing down on top of him surely would only increase the punishment he was feeling so far in this matchup!
_________________
"The Amazon" Alaina Sanders-Friction
Suzumi Ishikawa "The Tsunami"-Friction
Peggy McIntyre-Friction
Hikaru Sawazaki-Friction
Rosa "Crusher" Cabrera-Friction
"JJ" Janella Johnson-Friction
Raquel Masters-Friction
Lauren Fredericks-Friction
TAG TEAM
The Irish Amazons