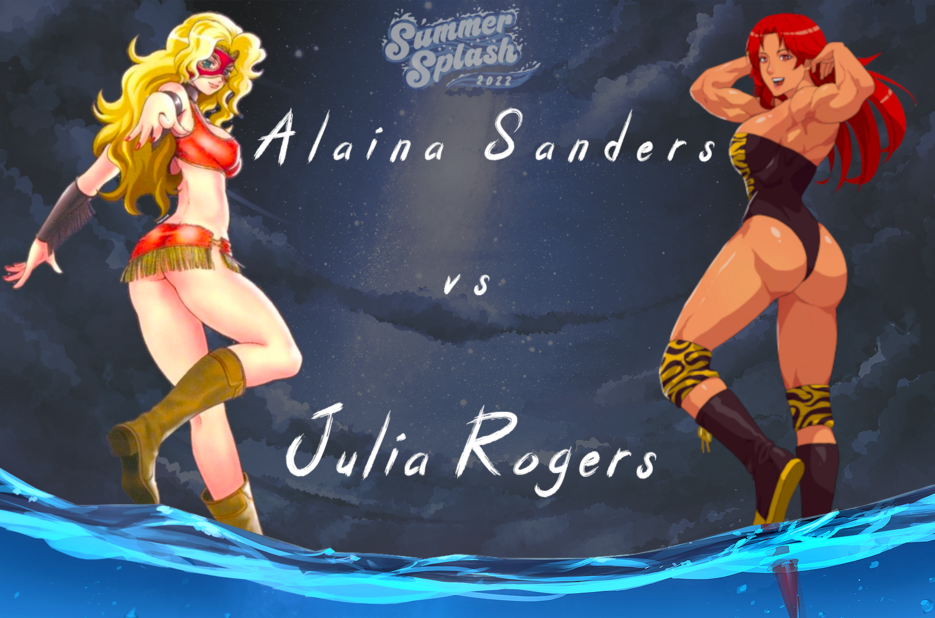 Julia stood behind the curtain. She had heard the preview video playing over the tron moments ago, highlighting everything that had led to tonight. Once it ended, the crowd had loudly applauded and cheered, excitement filling the thunderous noises that spread all throughout the arena. The sound made her smile, but did nothing to make her feel any less nervous. Yeah, after competing in more matches than she could count over all these years, you’d think getting butterflies in the stomach before a match wouldn’t be an issue anymore. Not so. Julia got them before every match, but never had she felt the feeling as strongly as she did now. This was the biggest match of her life, with Friction’s most important prize on the line. The pressure couldn’t have been greater, especially considering how rocky the path to this point had been for her.

Oh, and this was also practically a hometown show for her. Granted it was in Texas rather than New Mexico, but it was a 13-hour drive from Albuquerque. Plenty of her hometown fans had made the trip in. And during the first several years of her career spent training and wrestling in Mexico, she’d also wrestled on tours in Texas. No doubt she’d have supporters from both in attendance tonight as well. She hadn’t seen or heard from Jesse, Josh, or any of her family aside from a barrage of “Good luck!” texts this morning, though Julia had no doubt they were all here somewhere. They knew she’d want to be alone as much as possible to stay focused for her match, and they could all get together after the match…maybe…depending on how things went.

The cowgirl was distracted from her thoughts by the familiar string strums at the start of her entrance theme. The crowd joined together in shouting out in excitement, and surprised Julia by doubling the volume as soon as she burst through the curtain! Hardly even able to hear her music over the audience in the stands, Julia smiled brightly and pointed a finger skyward, prompting a row of red and orange fireworks to burst into the air in rapid sequence going across the stage at either side of her!

Clad in her usual ring gear, along with a tasseled leather vest and a jeweled, white cowgirl hat, she then hurried down the aisleway, slapping hands with as many fans along the front row as she could before she got to the ring. Then she hopped up on the apron and entered through the ropes, before climbing up onto the second rope in the nearest corner, where she cupped her hands around her mouth and shouted out as loud as she could.

They didn’t need to be told twice, immediately erupting into another wave of thunderous shouting in response. Taking a moment, Julia nodded in approval while her eyes scanned over the packed stands. Then she hopped down and walked over to her corner, taking a deep, calming breath while she began to stretch her limbs out and waited for Alaina to join her in the ring.
_________________
LARIATO'S LOCKER ROOM

Tonight was going to be tough.  Alaina had recently fly kept her momentum going winning a match against Bomber Kishima.  Julia however destroyed a monster if a woman in Rosa Cabrera.  Alaina however was a different breed of wrestler entirely.  She had beaten Julia before in a title match, she was going to do it again.

She knew the crowd would be behind Julia more than her no matter what she did, so she was pleasantly surprised that she also received a loud cheer as she entered the arena as she was announced to the crowd.  Alaina held her championship up high and flexed for the crowd.   The amazon moved down the ramp high fiving fans as she steut down, swaying her hips a bit.  Things outside the ring had been a bit hectic, so right now the champion was focused entirely on her wrestling where all was right in the world for the champion.

Alaina made it to the ring holding the belt high again before handing it to the official before stepping right up to the middle of the ring.  Alaina had a serious, stern look on her face but she extended her hand to Julia doing her best to smile warmly at the woman she was trying to beat again to stand victorious over to retain her chanpionship.
_________________
"The Amazon" Alaina Sanders-Friction
Suzumi Ishikawa "The Tsunami"-Friction
Peggy McIntyre-Friction
Hikaru Sawazaki-Friction
Rosa "Crusher" Cabrera-Friction
"JJ" Janella Johnson-Friction
Raquel Masters-Friction
Lauren Fredericks-Friction
TAG TEAM
The Irish Amazons

Julia’s eyes followed Alaina as the Amazon came down to the ring, then shifted to the championship belt when it was handed to the referee and then held up in the air for the crowd to see, which prompted another small burst of cheers and applause from the crowd. That prize was what this was all about. What Alaina was fighting to defend, and what Julia was desperate to achieve.

She was brought out of her thoughts when she noticed Alaina stepping toward her, offering a hand. Knowing her as well as she did, Julia knew the Amazon’s smile had to be at least somewhat forced. Alaina was by far the most competitive woman she’d ever met. Friends or not, Alaina would fight her with everything she had tonight as if they were bitter enemies, and the luchadora already knew from experience what that was like. Smiling back, she stepped forward and shook Alaina’s hand. The start of his encounter was already a polar opposite of their first, though that was unlikely to remain the case for long.

Julia stepped back into her corner while the ring announcer came to the middle of the ring to make the formal introductions.

“LADIES AND GENTLEMEN, IT IS TIME FOR YOUR MAIN EVENT! THIS CONTEST IS SET FOR ONE FALL, AND IT IS FOR THE FRICTION WORLD CHAMPIONSHIP!!!!” A burst of excited and eager cheers filled the arena.

As her name was called Julia stepped forward and removed her hat, holding it up in the air while her fans once more shouted and cheered their support for her. Then she went back into her corner and rested the hat on top of the ring post, before removing her jacket while the announcer proceeded with Alaina’s introduction.
_________________
LARIATO'S LOCKER ROOM

Alaina stood with her hands on her hips before Julia was introduced, clapping as the crowd roared for the challenger as she was announced. Alaina then confidently strut to the middle of the ring holding the Friction title high in the air.

Alaina held the belt high with one hand flexing a bicep and kissing her free arm. Alaina handed the title to the official, striking a pinup girl pose as she winked to the crowd, running a hand through her hair while placing a hand on her hip. After Alaina was done she stayed in the middle of the ring, standing ready. She knew Julia was going to come at her with everything she had, so Alaina had to do it back even more. She had beaten Julia once with a title on the line, she just had to do it again. Easier said than done.