Search
Latest topics
» Sabrina Anderson vs. Yuzuki Shogo
by Grievous77 Today at 9:52 am

» Nekketsu Championship Tournament: Round 1: Evelyn Evans vs Bryan Daniels
by Teenwrestler Today at 9:13 am

» Aoko Reinhardt vs Aphrodite: Start of Something New?
by SimplyMoon Today at 8:11 am

» Unfinished Business: Kogeki, The Demon Yokozuna vs. Aphrodite, The Love of the World
by SimplyMoon Today at 7:35 am

Shadow fell across Friction arena as a piece of spooky, yet whimsical music started playing, and a familiar laughter rung in the ears of the crowd, as the Shadow Lord GASTER walked into spotlight, stopping to stand proud and straight on top of the entrance ramp before making her way down to the ring, eyeing the audience underneath her smiley mask, occasionally stopping in front of random people (occasionally startling people who were paying more attention to their phones than to the ring, causing the British lady under the mask to almost giggle).

Soon enough, she rolled inside of the ring, standing in the ring with the same proud pose as at the top of the ramp...before erupting in her trademark laughter, as lights returned to the arena, and the Shadow Lord had a microphone in her hands:

"It appears...that a hurricane has come from the west to try and swipe me away...but what is a hurricane to me? A light breathe upon my person! I'll easily brave through my opponent's wild winds, destroy her, and make her obey my rule! Mwahahahahaha!"

It's been a while since Clara was in front of audiences like this, being mostly on the house show loop as she took a break from big scale matches such as this for a little while...but a cross-over match with a veteran Tension member was one she simple couldn't ignore. Even if she hadn't won singles belts in AFW, Makie Akamatsu was considered one of the best wrestlers in AFW, so this match was easily up her alley.

She stood in her respective corner, wearing her newer designed attire. Although she loved her earlier sports top + grey tights combo, she felt attire wasn't up to snuff if she wanted to go up in the wrestling world.

With that, the Shadow Lord stood on the lower left edge of the ring from the entrance ramp, awaiting her opponent's arrival...

The Hurricane that the Shadow Lord spoke of didn't take long to arrive.

Theme music began to blare out of the other end of the arena, and the audience cheered the moment they recognized the theme. Their cheering rose to a greater pitch as Makie Akamatsu strode into the arena. Raising her arms almost like a conductor urging her fans to scream louder, Makie strode down the ramp, her eyes focused on the ring and on the black clad figure standing in it. 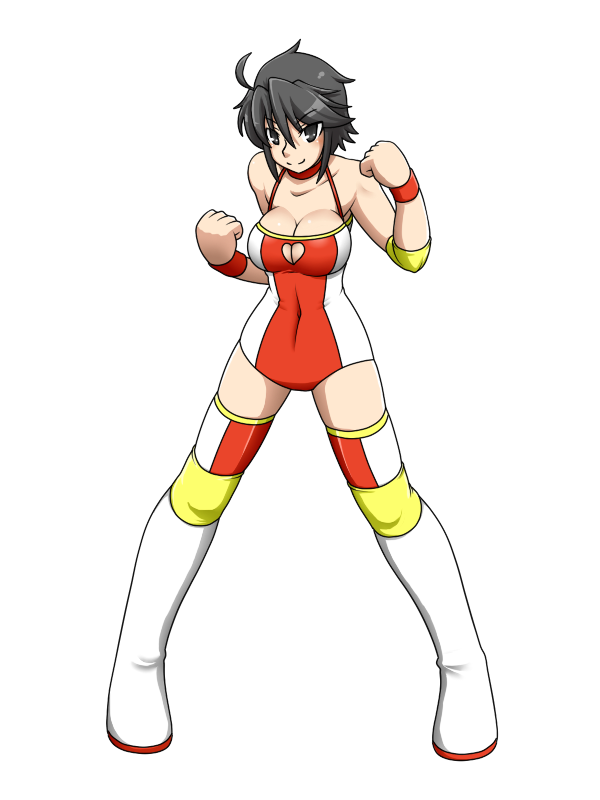 Things had been looking up for her ever since she and Kyo had won the tag team belt. Where before she had had to argue long and hard to get matches booked against the tougher competitors in the league, now her match schedule was practically lined up with people wanting to take on one of Tension's best. That included a lot of cross-roster challenges...including one from the so-called Shadow Lord, GASTER. From what Makie knew of GASTER, she was a tough, vicious fighter, but she was confident that she could still take her.

Sliding under the ropes, Makie wasted no time striding towards Mako, locking eyes with her. The other girl was fairly short as well,with a slender figure that spoke of speed and agility. And then there was that creepy mask of hers, which she kept on. Makie wondered how well that would protect GASTER from head shots, and resolved to test that question in the ring.

Standing up to her full, less than impressive height, Makie nonetheless glared as she stared down the faceless, masked figure, motioning for the referee to hand her the mic. "So you're the Dark Lord I've heard so much about," she said, slowly circling GASTER. "So tell me, do you wear that mask because you're hideously disfigured or ugly underneath? Or is it the source of your mystical poseur? Or maybe...just maybe...you're some poseur who wears a mask to make up for a lack of actual wrestling ability?"

As the fans burst into laughter and applause at this banter, Makie went on. "Whatever the case, you wanted me? Here I am. Just remember, though, that you asked for this, Miss Supervillain." Passing the microphone back to the ref, she stepped away from GASTER, rotating her shoulders as she waited for the bell.
_________________
UNDERDOG'S KENNEL:

Despite not being a Friction native, the fans were chanting loudly for one half of the new Tension tag team champions...though the woman's eyes were firmly locked on GASTER's, completely focused on her opponent here tonight, from the top of the entrance ramp, all the way down to the ring, Makie's determined gaze did not leave her opponent. Soon enough, the two were standing face to face with one another, quite similar in height, though Makie proved slightly taller. She returned GASTER's banter with her own, questioning the Shadow Lord's mask...and her wrestling ability.

GASTER, mic still in her hand, spoke back at Makie: "You shall come to regret even the thought of underestimating my terrifying power, as I twist you into unimaginable shapes on the ground, making you scream for my nonexistent mercy!"

With the banter out of the way, the ref collected the mics, as GASTER did her own series of stretches, the ref soon asked for confirmation from both wrestlers about being ready, GASTER nodding, with Makie soon following suit, and the ref signaled for the bell, match officially under way!