Search
Latest topics
» A Siren's Domain (For Scourger)
by Scourger X Today at 8:23 am

» The Announcement
by HighFly Today at 3:23 am

» Calling out the Champion
by Ringropes98 Yesterday at 11:24 pm

Inside the changing room, while trying to hide the excitement on her face, Himiko looked at herself in the mirror, carefully adjusting her special designed attire, as usual, she wanted to leave a memorable impression to both audiences and her opponent. Despite she was still very unfamiliar to this type of match and was honestly a little nervous on what will happen during the match, Himiko still couldn’t wait to show what she was capable of. Finally finished the preparation, Himiko walked into the arena. Hearing the cheering from the audiences, she knew this was going to be a fun night. Himiko would briskly run down the path and jumped up to climb into the ring with her agility, and she would turn around and waited in her corner, she couldn’t wait to meet her opponent for tonight. It had been a long time, too long, since Teddy Cat Hori had gotten a match in AFW, her last one being a victory over the masked wrestler Black Fang nearly three years ago. Far too long for the cat girls taste. Apparently, she had been marked as too "cutesy" and "not a big enough name" from Wrestle Angels to be called up more often. Well boo and hiss to them! She'd show them in this match just how could the power of kitties could be!

When her own, admittedly generic, theme music came on, much to the delight of her sparse fanbase in the audience, she came out, clad in her classic purple top and bottoms, putting up her fingers as cat ears on the side of her head and meowing for the fans. Sliding under the ropes, she got into the ring, striking an adorable kitty pose for her fans before looking at her opponent. What did the match card say her name was again, Himiko? Wow, she was small! Given the size difference alone, Teddy bet she had this in the bag! 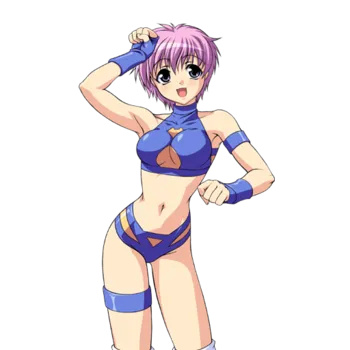 With the music suddenly played and cheering of the crowd, Himiko knew her opponent tonight has made the arrival. From a distance, she could see a figure running towards the ring, closer and closer, although it was quite hard to focus the sight on what her opponent actual looked like. Finally when the figure climbed up into the ring, Himiko could take a good inspection on her opponent. That was a young woman with violet short hair, her outfit seemed like pretty typical wrestling attire, purple two-piece attire with knee-high boots and fingerless gloves, very "heavy armed" compared to Himiko's attire, oh and she did a cat pose and made sound of cat before turning around, how adorable. The energic attitude of her opponent caught Himiko's attention, despite she was begun to be a little nervous because she noticed the girl opposite her was obviously taller than herself, which may give her disadvantage in the match.

Upon hearing her opponent introducing herself as "Teddy Cat Hori", the vivid voice from Hori made Himiko smiled a little, although she could hear a little of taunting in what Hori said. Especially when the kitty cat made comment on her outfit, Himiko couldn't tell if her foe was actually praising her or just sarcasm. Seeing Hori start playing pawing to her direction after the introduction, Himiko would reply with a laugh: "Hehe. My name is Himiko Chikako. And yes I am ready to have some fun! I just hope you are ready too because this is gonna be a unforgettable night for you!" Himiko would raise both of her arms and put her hands together to stretch herself, as if she was doing a simple warm up. "Also, I really like your outfit, too. But I'm afraid it won't be yours anymore later!" After the speech, Himiko would have another smile, and bring herself to a ready stance, and waited for the match to begin. Like her opponent, she also couldn't wait to have fun tonight.
_________________
No-joke Rosters

Teddy giggled as her opponent replied back to her. With a quick look at the ringside bell keeper, one that voicelessly asked to be given more time before the bell rang, Teddy walked across the ring, closing the distance between the two cute girls.

Finally the bell rang, and finally the fun could begun. Himiko thought to herself, she would approach towards Teddy as her foe did the same. Upon the distance between both of them got closer and closer, Himiko thought about what her opponent, this "Teddy Cat" girl would possibly do when they reached together, will she grapple her? Will she punch or kick her? And what moves she would perform to counter these attacks? But all in one word, Himiko was still confident that no matter what the girl on the opposite would do next, she was always ready... Or was she?

When both of them got close enough to each other, however, to Himiko's surprise, Teddy suddenly lowered herself and got down on her knees, in a funny yet weird way, started crawling towards the blonde, while making the voice of a cat. "Err... What are you doing?" Himiko already noticed this pink haired girl liked acting like a cat when they were introducing themselves, but didn't expect she won't drop the act even the match begun. That's when Teddy crawled close enough to Himiko, as the pink hair started to raise one of her arms and started pawing very gently and slowly on Himiko's body, the blonde's surprise slowly turned into a little annoyance. "Hey, hey! What's wrong with you!" The blonde honestly wasn't prepared at all, she didn't know what should she do to... this. When her opponent lean to her further and begun nuzzling her own cheek against the blonde's thin thigh, Himiko's annoyance again start to mixed with some embarrassment, "Stop playing around you weirdo!" Himiko would reach down and place both of her hand on her opponent's cheek, trying to push Teddy away from her body and demanded her to stop this weird act.
_________________
No-joke Rosters

Teddy grinned, sticking out her tongue and slowly running it up Himiko's bare thigh before the small blonde pushed her away and called her a weirdo, Teddy reaching out and pawing at the girl.

With that last word, Teddy, having hunched back onto her feet while still in her crouched position, sprang forward, trying to pounce at Himiko and grab her shoulders to tackle her onto the mat!
_________________
Check out the recently revamped Roster Page, now with pics!

Although Himiko pushed her opponent away to show her clear unwillingness to the weird "roleplay", Teddy seemed still refuse to stop, as she continuously reaching out her hand, pawing and taunting the blonde. "What are you even talking about!?" Himiko started becoming a little impatient towards her opponent's act, as she interrupt Teddy's words, "I said stop! Stop! Or I will... Eha?" However without Himiko finishing threating, Teddy suddenly raised up her upper body and lashed forward towards the blonde.

Such a sudden attack caught Himiko completely off guard, as she couldn't perform any effective defense, but on the other hand, even if she could, it still would bare affect the result as the kinda obvious differences in physical strength were just there. Himiko didn't react on time, her shoulder was already being grabbed by her foe, immediately followed by a powerful force, caused Himiko to fall backwards and eventually laid onto the mat, made the blonde let out a "Ouch!" "Get your hands away from me!" Himiko yelled towards her opponent. If Teddy would still holding Himiko onto the mat like that, the blonde would start twisting and struggling her body on the mat to try to break free from Teddy's hands, despite that most likely won't help for even a little because, once again, the obvious differences in strength.
_________________
No-joke Rosters

Teddy loved her gimmick. Partly, of course, because of her legitimate deep love for cats, but also because the performance allowed her to be cute and sexy and playful in front of the audience and with her opponents, and sometimes that was enough to throw her opponents off, as it clearly had thrown Himiko off at the start of things.

The girl twisted and squirmed for certain, and while Teddy kept a hold of her shoulders for now, there was no guarantee she could keep the smaller girl down for long, but for now, she kept up her act, leaning her body down and rubbing her bare cheek against Himiko's while purring.

Himiko tried to shake Teddy off her body while this weirdo kept playing with her with this ridiculous roleplay, but she still couldn't do so, the difference in their physical strength was there after all. As Teddy kept purring her body, the itchiness on her skin made Himiko couldn't hide the embarrassment on her face. "Stop this right now I'm warning you!" Himiko let out a threat, but it seemed didn't do anything towards her foe's action.

Upon hearing another taunt from Teddy, Himiko felt she already had enough, she needed to fight back for some degree. This thought burst out as when Teddy started licking her cheek. In anger and disgust, Himiko yelled "Stop it!" Probably out of instinct, Himiko would try to send her head upwards as she tried to hit Teddy directly in the forehead with hers for a headbutt, hoping this could stop her opponent's action.
_________________
No-joke Rosters

Teddy loved this. Most people would call her kitty gimmick dumb, but she enjoyed it so much, getting such a kick out of it both from a personal and a perverted perspective.

She yelped, getting a headbutt to the face from the smaller blonde girl, making her wince and back away from her cute, smaller opponent, rubbing her forehead. *Owwww-nya, that wasn't very nice!" She exclaimed, reaching down and grabbing the front of Himiko's outfit and pulled the smaller girl forward towards Teddy, so the purple haired woman could scoop her lighter foe up and slam her onto the mat with a revenge body slam!
_________________
Check out the recently revamped Roster Page, now with pics!