Isaac Clarke Vs. Teddy Cat Hori: Anything To Win (Complete)

Isaac Clarke Vs. Teddy Cat Hori: Anything To Win (Complete) 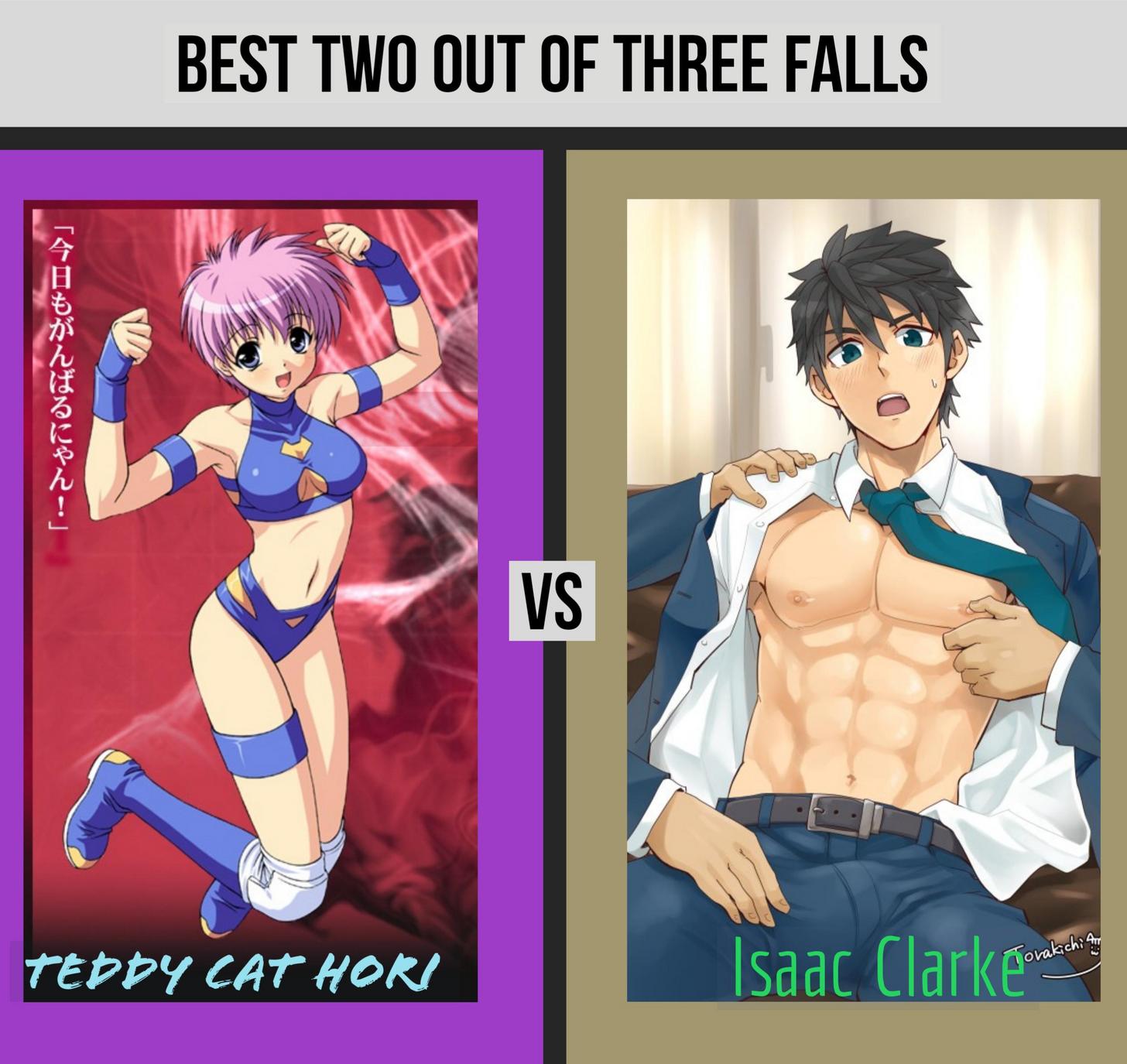 Isaac waited somberly for his music to hit. It had not been a good week. After Sin had wiped the floor with him he had spent this week and the prior one stuck in bed, recovering from several lacerations and a concussion. He hoped his patience in recovering would pay off in the form of a victory tonight.

Isaac was more than pleased when he found out he'd be facing a girl like Hori. From what he had read about her she seemed like a nice and, importantly, not a very powerful girl. After getting his pride shattered by the psychopath he faced last week Isaac needed a win. As his generic metal theme music hit the arena Isaac flinched in surprise. A few deep breaths later the freelancer calmed his nerves and headed towards the ramp. "You can do this! Do whatever it takes to win..."

As Isaac ambled down the ramp the people who once booed him for beating up women now laughed at him for getting his ass kicked by one. "I just can't win with these people," Isaac thought glumly. Disregarding tonight's attendees Isaac continued marching until he reached the ring. After a quick slide into the ring, his anxiety began its evolution into excitement for this fight. "This girl probably pretty tough but I'm better! If I keep my wits about me and don't lose my nerve I can beat her!!"

It had been a long time, too long, since Teddy Cat Hori had gotten a match in AFW, her last one being a victory over the masked wrestler Black Fang nearly two years ago. Far too long for the cat girls taste. Apparently, she had been marked as too "cutesy" and "not a big enough name" from Wrestle Angels to be called up more often. Well boo and hiss to them! She'd show them in this match just how could the power of kitties could be!

This time around, she was in Tension, and fighting a guy of all things. Unfamiliar territory. Certainly new...but she could handle it! She had power and kitties on her side, how could she lose? She'd take both of these falls! With a quick glimpse at her wallet, with the pictures of her current three cats, she gave each one a brief good luck kiss before putting her wallet in her bag and storing it before heading out to the entrance ramp.

When her own, admittedly generic, theme music came on, much to the delight of her sparse fanbase in the audience, she came out, clad in her classic purple top and bottoms, putting up her fingers as cat ears on the side of her head and meowing for the fans. Sliding under the ropes, she got into the ring, striking an adorable kitty pose for her fans before looking at her opponent. What did the match card say his name was again? Clark?

Isaac could not help but grimace as Horo introduced herself. With a defeated sigh he rubbed his hands against his tired face. "Oh fuck me she's so cute... And that cat thing she's doing! It's gonna be so hard to lay a hand on her..."

After his small internal pity party, Isaac tried his best to smile at and greet his opponent. "It's nice to meet you too...teddy... I'm sure our match will be very... Interesting... Also, I just want to apologize for potentially hurting you... More than is necessary. It may seem like I'm grandstanding but... I don't feel great about any of this..."

With one hand awkwardly rubbing his neck, Isaac offered the other to Hori.
_________________
Howdy i'm WrestleMind and there's nothing i appreciate more than honest feedback and discussion. Wanna tell me I suck? You would make my day!

Well, that was an interesting greeting. This guy was pretty cute actually. Dude was her height, had more muscle and weight, but was apologizing for possibly hurting her? That was a nice thing to do...but, and her imaginary kitty ears perked up at this, it told her that he didn't really know her that well, hadn't seen her other matches...and didn't know just what a powerhouse the kitty obsesed wrestler could be, despite her slim frame.

This would be fun!

With a smile, she accepted and shook his hand firmly. "No worries Clark Clark-Nya! Just cause we gotta beat each other up doesn't mean we can't have fun at the same time-nya! Let's have a good match and show this audience what we can do, alright? I promise, I won't use any fangs or claws on you!"
_________________
Check out the recently revamped Roster Page, now with pics!

Isaac laughed nervously as he eyed the small girls hands and mouth; no claws or fangs... As far as he could tell. After one prolonged and deep breath he summoned enough nerve to ask the referee to ring the bell.

Isaac curled his hands into balled fists while assuming a defensive posture. "To start things off id prefer it if you attacked me first... You know so I feel justified in defending myself..."
_________________
Howdy i'm WrestleMind and there's nothing i appreciate more than honest feedback and discussion. Wanna tell me I suck? You would make my day!

"Nyah?" Teddy exclaimed in her kitty-like way, briefly looking confused. What a strange, yet cute, man. Joins a fighting league specifically centering around male vs female matches, yet needs a female opponent to attack first so he felt better about defending himself?

Odd, curious...but at the same time, a good sign that this guy wasn't going to do anything underhanded or sneaky against her, and probably wasn't one of those perverts that only joined the league to hump women...though in fairness, she was hardly one to criticize anyone for being perverted.

With that comment, and the ringing of the bell to signal the start of the match, the cute former Wrestle Angel charged in, aiming a hard kick right for Issac's stomach!

Isaac was too engrossed in his feline opponent's slender body and adorable mannerisms. So engrossed that his reaction to Teddy's charge was snail-like. With ease, Teddy slammed her leg into Isaacs diaphragm, compressing it like a bagpipe. She had caught him mid-breath and knocked the wind out of him.

Wow. That was surprising. After making such a big deal about needing her to attack yo defend himself, he proceeded to...not defend himself at all, and take her kick straight on. A bold choice...if a bit foolish.

Still, he claimed he was fine, sooo...

"Ermm... Uhmm... At the end of the night, all I'm gonna try to do is knock you out and pin you... Though I encourage you to try and use whatever you have in your arsenal. And uhh, whatever happens, happens..."

After this little bit of tacit acceptance, Isaac suddenly flung himself at the kneeling Teddy; Hoping to catch her off guard.
_________________
Howdy i'm WrestleMind and there's nothing i appreciate more than honest feedback and discussion. Wanna tell me I suck? You would make my day!

Honestly, Teddy was mainly asking because, based off what he had shown so far, she wasn't certain the male fighter was really up to facing her. He seemed flustered. But, he seemed confident he could handle it, claiming he'd even knock her out.

But then he made a mistake. He tried to pounce on a cat!

Teddy Cat Hori was always being underestimated, as her slim and toned frame hid their own just how strong she actually was, and while she was certainly quick, people forgot how quick and nimble she could be. She had kitties, after all, and often played with them by trying to dodge their attempts to pounce on her, either avoiding them entirely or catching them in mid air.

Compared to the speed and timing needed to dodge a small nimble kitty leaping at her from the shadows, rolling out of the way of the much larger leaping Issac was far simpler, leaving nothing but the mat for him to crash down on, while Teddy got back on all fours, licking at her "paw" before playfully pawing him on the head with an adorable "Nya!"