Morgan vs Echo - A Submission Escapade

Morgan vs Echo - A Submission Escapade

The billing for tonight was almost just a standard match for Morgan. It would have been tragically boring if she was relegated from her usual flashy fanfare to something without all the pomp. It took a bit of pressure, namely Morgan saying she just will take the disqualification loss for not showing up if she wasn't given something with a bit extra. Management did cave a little, changing the rules to only allow a submission tap out to be accepted as the only means of winning.

The match still lacked flare but being a natural sparkplug herself, Morgan was sure she could make up for it for some rather daring escapes. She knew a little about submissions but knew more about escaping them rather than creating them. So it seemed like a fair match in conclusion. Well that's if her opponent knew submission holds but according to the tagline of her opponent, Echo, she was a "Legacy Fighter". So yea? Guess she'll see.

Entrance, music, and Morgan's normal flashy entrance of sparklers and a magical trick. This time she went with a snap of her fingers and making your stereotypical magician's hat appear in her hand. A simple feat and one that some might be able to figure out especially with the hint that the hat was not their ordinary hat. Though there wouldn't be any evidence for the lucky fan that got tossed it as Morgan skipped down towards the ring. Though she did wear the see-through shirt for a reason. It meant she couldn't hide anything up her sleeve, making the surprise of her tricks more impressive. A magician never tells, though. 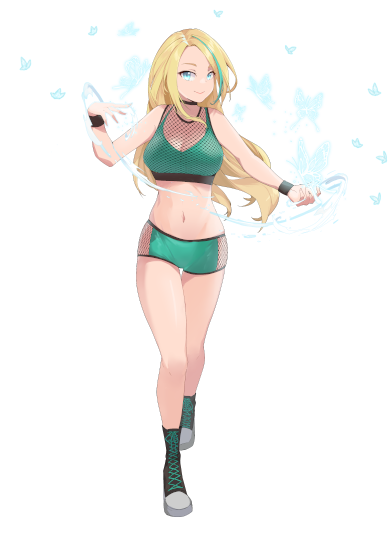 Climbing into the ring, Morgan slipped into her corner and lounged against the turnbuckle waiting for her opponent. She heard Echo was cute~

Backstage, Echo prepared herself, adjusting her died hair and making sure her short shorts were snug, slipping her half top over her bra, putting on her wrist straps and making sure she looked good. Being cute and attractive was important in AFW after all, and she needed whatever she could get.

Still, tonight was a fight against a new girl, and a submission match to boot. That would be tough. Hearing her music play, Echo tried to put her fears aside, winking at her reflection and heading out towards the entrance ramp.

The greek rookie finally came out, in her pink and white attire. her cute body and slim, toned, bare legs on display, she waved to the crowd and made her way down the ramp, the steel feeling cold on her bare feet. Entering the ring, she waved once last time to the crowd before looking at her opponent. 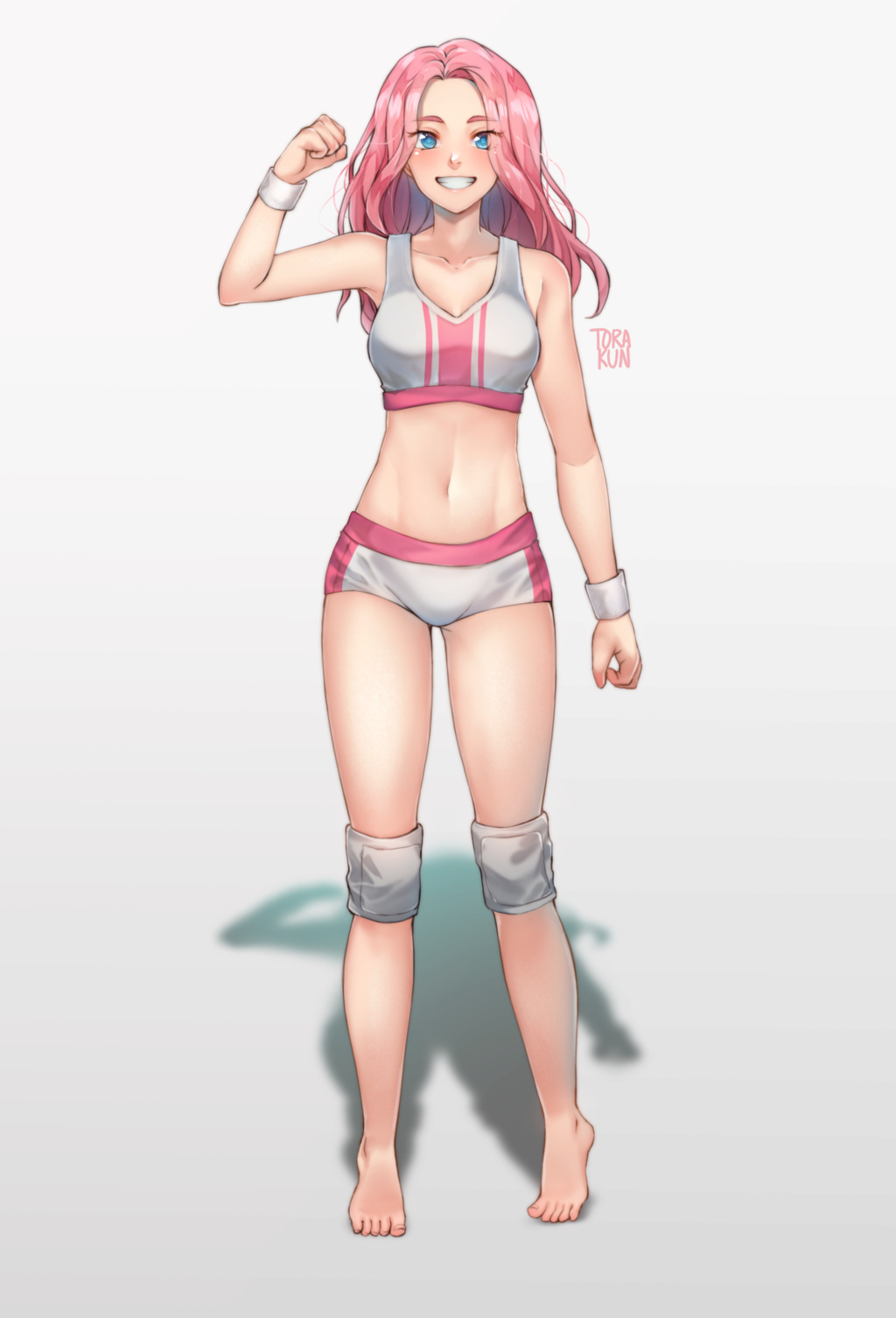 She was...another super cute teenager. Go Figure. Clearly one of the bookers had a fetish no doubt. Then again, that could be said for everyone in the entire company.

Echo was certainly cute but she could not for the life of her understand the shoeless thing. First off, the floor of the arena was really gross. Probably. Second, it looked cold and dangerous with any number of potential things to step on. Echo might have been the country girl that walked barefoot on gravel or something if she were someone Morgan knew back home.

Although judging by the girl's posture, she probably wasn't much like a country girl. More like a country mouse. At least mice were cute though. Also easy to use in a number of magic tricks if you trained them well enough. In fact that might be a great metaphor for this match, Morgan thought. She's going to teach country mouse Echo a vanishing trick to make her win disappear! Funny but in a terribly cheesy way.

Morgan watched as her opponent entered the ring and she spoke. Morgan smirked, her posture read was spot on with Echo's stuttering, timid question. Though it was a valid one.

"Very carefully~" Morgan winked, leaning forward as if she were going to reveal a deep, dark secret. However she stuck a finger up, "And besides, a magician never reveals her secrets~". Morgan stuck her tongue out after that one, pleased with herself.

Echo blinked a few times at the response, as it seemed that Morgan was going to tell her some secret of some kind, but blushed and flustered as it became clear the magician was just making fun of her instead, getting Echo to blush. Embarrassed, she would respond loudly, trying to sound boastful to cover up her embarrassment in getting so easily fooled.

"Well, I wouldn't be so confident if I were you! I'm Echo Alexandria, I'm a fifth generation wrestler, and I've been trained by my talented family for years to become to ultimate pro wrestler!" She declared boastfully, her first raising into the air, before she began to sneer and snicker to herself while looking at the incredibly attractive magician before her.

"So of course you understand, whatever silly magic tricks you might have are really nothing to a legend-in-the-making like myself, you'll still end up tapping out at the ground and having to kiss my feet in defeat, what do you have to say to that!?"

Echo declared, letting out a haughty giggle, her self confidence sufficiently boosted by her bravado!
_________________
Check out the recently revamped Roster Page, now with pics!

Morgan stuck her tongue out again as Echo apparently felt threatened enough to start boasting in her defense about how she's a fifth generation and a prodigy and on and on. It was adorable that she felt so proud about herself, and it was going to make Morgan feel bad to have to knock the Greek wrestler down a peg.

"Aww~ Little Echo is trying to sound all high and mighty." Morgan teased matching with her own giggle. Though it was ironic that Morgan was calling Echo little considering Morgan was just a few inches shorter than her opponent. Probably under her weight as well, but that should hardly dictate the match, right?

"But there is an idea, let's table that discussion of who is kissing who and where for later. I have a match to win~"

Morgan waited for the bell to ring and then she plunged into action by getting down in a lock up stance and trying to grapple with Echo's hands, tying their fingers together in a test of strength! "Let's just settle who is stronger first!"
_________________
Honcho's Hotshot Hostel: Character Roster

Echo blushed, but got a cross look on her face, fuming a little as Morgan reacted to her boasting by teasing her and then offering a test of strength. The sight of the woman giggling was legitimately adorable, but Echo couldn't be having those thoughts right now, she needed to put this magician in her place!

"F-Fine! I'll prove how much stronger I am!"

Echo replied, the bell ringing and the pink haired teen raised her hands and spread her fingers, interlocking them with Morgans and immediately trying to push her fingers back!
_________________
Check out the recently revamped Roster Page, now with pics!

Morgan was excited to lock fingers with Echo. Naturally, she hoped to start putting the pressure on her cute opponent early. It was only fitting considering the teasing she was doing earlier. Their grips were even for the second.

"Hehe~ You're not th-!" Circumstance was proving to be quite contrary to the blonde's expectations as she felt herself having to take a step back. A retreat to prevent herself from being totally overwhelmed! With Morgan being slightly shorter and lighter, she didn't quite have the force to stack up. Plus, this was one of her first real usages of strength. She had always been the more agile and flexible sort where Echo was probably more built.

Morgan clenched her teeth as she dropped to one knee having to bend her torso back from the waist. She was barely holding on from being completely toppled by Echo!
_________________
Honcho's Hotshot Hostel: Character Roster

While Echo wasn't all that built in terms of muscle, having a flat stomach and lacking definition, she had a strong core and a slim amount of muscle on her that only really showed up when she flexed. Still, while it wasn't much, it was enough that, after an initial gasp as she thought the cute teen magician was as strong as she was, she was soon able to push past that counter force, and start forcing Morgan down on one knee!

"HA! What was that you were gonna say? About to say I'm not strong? Well shows you what you know!" She exclaimed, quickly becoming very happy about gaining the early advantage...though with a slight pink blush, as she had to admit, Morgan looked very cute on her knee like that...but she quickly pushed the thought aside.