Echo, though in a white bikini for this match.: 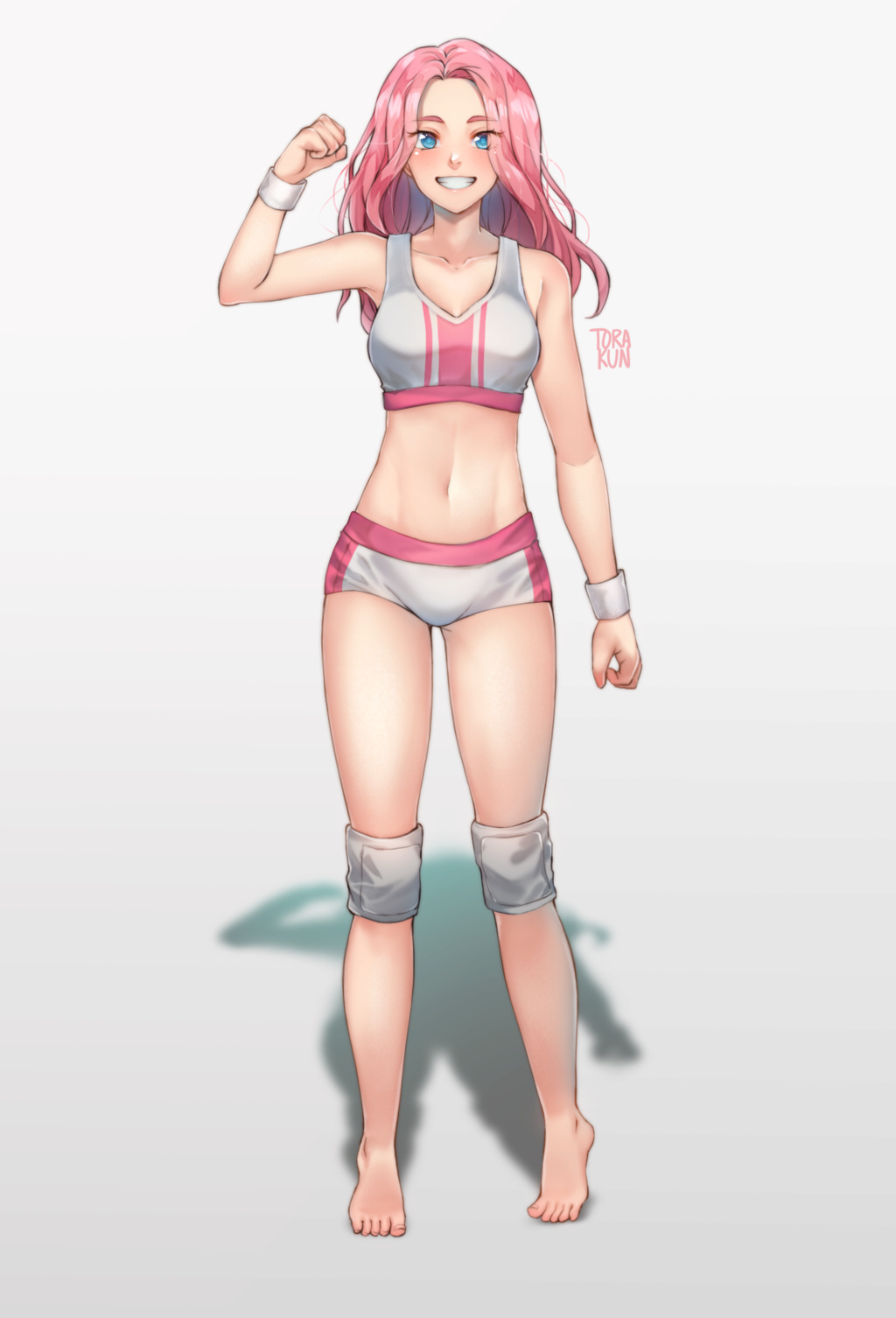 Bare feet stepping on cold steel, young rookie with the 0-2 record, known for throwing temper tantrums after her losses, blushed as she came down the ramp, hearing the crowds appreciative whistles and catcalls towards her, making her embarrassed, but also enjoying the attention as she came up to the large oil pool, standing outside of it, not getting in just yet as she awaited her opponent, hoping it was someone nice.

She finished getting on her attire as she looked at the woman returning the gaze. Estelle had heard some things about her rival today. She had the chance to look at some videos that showed a young and proficient wrestler, but also a little rash and with a tendency of going into tantrum when losing. That pinkette had a 0-2 record at the moment so the Swiss expected her to go all out for a win, maybe too much and making some mistakes she could use on her favor. Her superior experience would prove useful as well.

It was Estelle’s turn to get into stage so she got ready as she noticed her rival’s entrance theme finishing. Then, with the initial strings of violin coursing the arena she made her appearance. The crowd was getting used to the sight of Estelle but that didn’t stop it from cheering, even more now that she had taken a hold on her career. Sultry and playful but elegant for a scantly clothed woman she made it to the ring with some catwalk until she reached the oil mat and faced Echo for the first time.

Petite and small but well toned and with a sweet face. The pinkette looked appalled but also eager to start. Estelle made a warm and inviting smile. “My my, nice to meet you dear, I’m Estelle. Looking forward to this.”, she finished as she winked an eye at her rival.
_________________
BEHOLD MY ICY FORTRESS

Greek vs Swiss. Add in a french woman, and this would have been a battle of cheeses. That was a weird thought to have, but in fairness to young Echo, she was very nervous. Luckily, the woman Estelle, a bikini clad beauty that came down the ramp next, seemed very friendly and nice, while also being Echo's size.

The rookie blushed, clearly admiring Estelle's body as the woman winked at her. "I'm Echo. It's nice to meet you too. I've uh...never actually done one of these matches, so I'm uh...pretty nervous..." she said. Carefully she stepped into the oil pool as the bikini clad referee entered the pool herself. Unlike the ref girl however...Echo slipped pretty much immediately, falling onto her butt in the oil!
_________________
Check out the recently revamped Roster Page, now with pics!

“Don’t you worry, dear. You will enjoy thi… Oh!!” Estelle was in the middle of a sentence, trying to reassure Echo’s confidence when the pinkette just fell on her butt the very moment she stepped on the oil pool! Estelle rushed inside to check on her rival, kneeling at her side. “Are you okay Echo?” The bikini clad ref thought that movement of approaching was a match starting movement so she signaled the bell to ring and the combat started in a weird way!
_________________
BEHOLD MY ICY FORTRESS

Well...that was embarrassing. Echos slip had splattered oil over her bikini-clad booty and legs, getting a laugh from the crowd and a shout of concern from her opponent, who made her way towards her, getting the referee to ring the bell.

Unfortunately for Estelle, Echo, while blushing, ALSO thought that Estelle was coming to start the match, and so, while pushing herself up, Echo half lunged, half slid towards Estelle, trying to crash into her to take her down too!
_________________
Check out the recently revamped Roster Page, now with pics!

Everyone was laughing at Echo's slip and Estelle could only think how terrible that should feel for the Greek girl as she stepped inside the oil pool in an attempt to check on her rival.

But no one actually understood what was going on and the referee interpreted that as a move that should begin the match so the bell rang. Even worse, Echo thought Estelle meant some kind of agression and she lunged forwards. The Swiss was caught off-guard by that move and she fell on her back with a splashing sound. "What? Aaah!" Estelle's insticts acted quickly, though, wrapping her legs around her rival's waist who would lie on top of her. Even so, the brunette wouldn't try anything else. Instead she would rise her hands in a non-agressive way to show that she meant no fight. "Echo, wait! I just wanted to check if you were okay..." She wouldn't unwrap her legs, but she wouldn't strike either, just wanting to know what Echo would like to do from there.
_________________
BEHOLD MY ICY FORTRESS

Echo had been full steam ahead, at least, as best she could in this slick oil, half tackling, half falling, on this new opponent. The feeling of Estelle's legs wrapping around her waist made the teenaged rookie blush and raise her arms up to attack, only for Estelle to... say she was checking on her instead?

Estelle’s guard wasn’t up because the match hadn’t properly started, and that was the reason why it was so easy for Echo to topple her on her back. Even so the Swiss’ instincts made her wrap her legs around the pinkette’s waist as a way of defense. But Echo wouldn’t stop there and would lift her arms as preparing to hit Estelle. The brunette raised her own arms with a surprised and scared look in her face in an attempt of protecting her face before Echo would strike.

Luckily at that moment Estelle’s explanation reaches Echo and the pinkette blushed deeply at what was going on. The Greek explained that it was her first time in an oil match and as the Swiss thought most likely it was her first hentai match as well since the smaller woman looked in a state between appalled and scared. Could it be that the AFW sent her a rival so inexperienced like that to see how she would react to it? Estelle had heard the stories of vicious wrestlers who made their rivals’ first time a terrible one, but that wasn’t her.

“Okay Echo. You don’t have to be worried. Just enjoy yourself as much as you can while making all that people enjoy the sights.” Estelle said trying to reassure her rival’s confidence. “Now that we are more aware. What would you like to do? Would you want to reset our position or to retake the match from here?”
_________________
BEHOLD MY ICY FORTRESS

Echo blushed again as Estelle offered her advice and to switch positions, the bikini clad rookie backing up, barely managing to avoid falling on her butt again as she stood up, blustering and pointing at Estelle, trying to look better by seeming aggressive.

"I-I don't need any advice from you! I've got this in the bag!" She said, trying to convince herself she was confident and could handle herself in this match!
_________________
Check out the recently revamped Roster Page, now with pics!

Estelle noticed how Echo blushed deeply when the Swiss tried reassuring the pinkette and offered a position reset in order to properly start their bout. She couldn’t avoid thinking that was too cute but then the Greek stood up in a rage as she almost falls on her butt once more. Then she looked and talked agressively at Estelle, trying to look menacing and imposing but failing to do so, her insecurities and doubts transpiring.

Estelle sighed as she got up. Even if she disagreed with the woman’s ways she understood what the pinkette was going through. Not much time ago it was her the inexperienced rookie trying to prove herself and being pitted against sensual women while she was insecure about her skills. That was why despite her outburst Estelle couldn’t find the energy to be mean or to teach Echo a lesson: it just wasn’t in her nature. Instead, the Swiss would pay the rookie in the same coin she got when she was a budding debutant. She would give the pinkette a chance to prove what she can do, but never relent in her attack when the moment to go for the win came.

Estelle was now standing again, everything ready for the match to restart as the crowd somehow understood what was going on and started cheering. The brunette smiled confidently at her rival. “Alright Echo. Show me that resolve of yours.”, said Estelle, challenging her rival to do her best.
_________________
BEHOLD MY ICY FORTRESS