This wrestling thing was turning out to be a walk in the park. Well, obtaining the popularity and the ratings part of the job, anyway. When it turns out your cute and confident, the fans just can't get enough of Morgan's stardom. Even when she was getting her butt kicked around a bit. Now she'd be the first to admit that the actual fighting part of it had a bit of a learning curve, but hey, she had plenty of time to figure that out. That was a bit of a motivator to try just a standard match tonight as she could focus on what she needed to do, rather than goof around.

She wasn't really looking forward to this as her music cued her on but the fans obviously wanted her and so she'd obliged.

Eyes on the Prize: 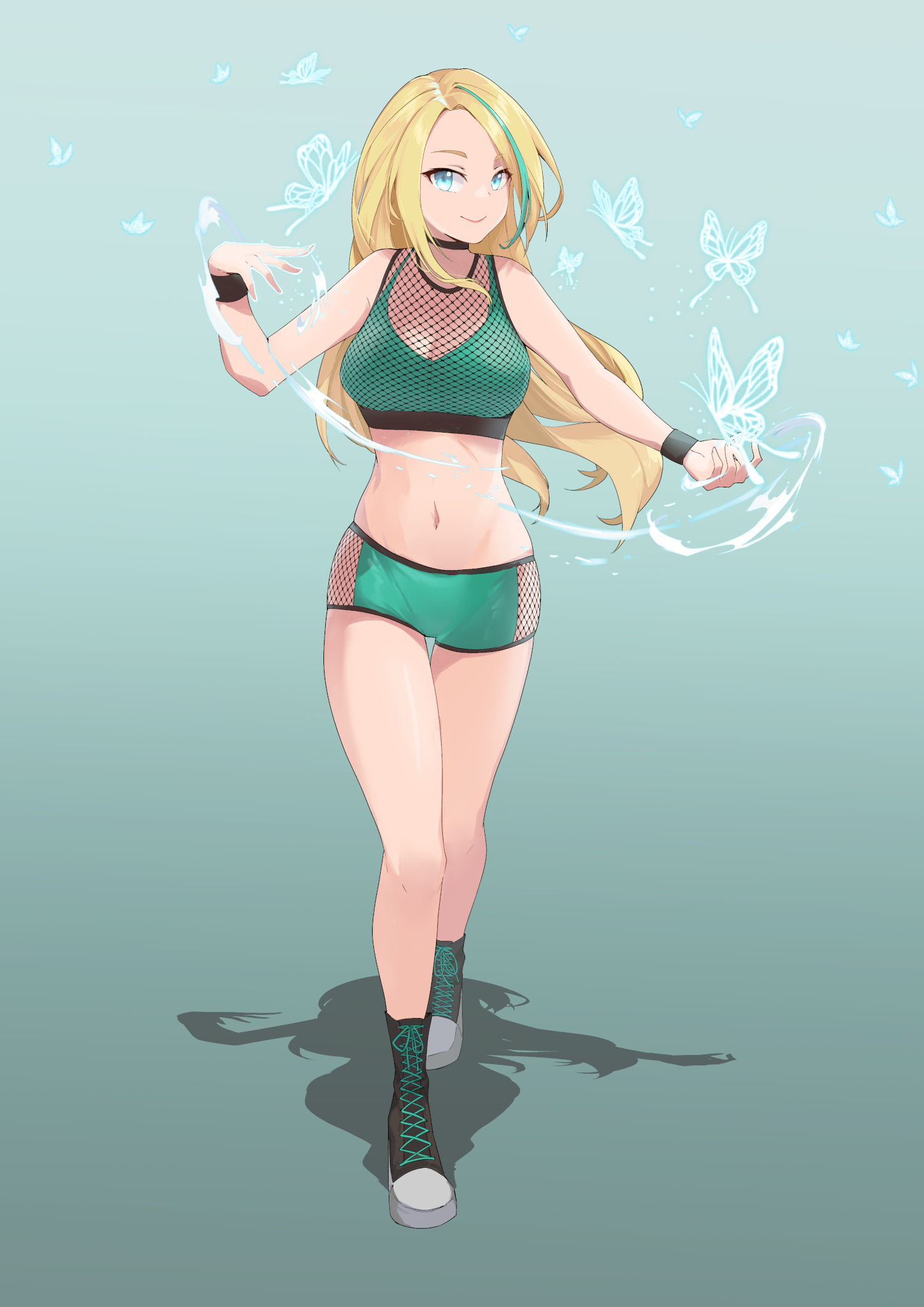 Popularity this good was hard to come by. Speaking of popularity, the thought occurring to Morgan as she pranced down towards the ring. Her opponent tonight was supposed to be playing hard into that popular girl schtick. Except dialed up to like a hundred. It made Morgan think of her high school days a little. There was certainly some envious girls there who couldn't stand that Morgan was her own person being a performer. Only back then, they couldn't lay a finger on her unless they wanted a detention at the very minimal. Here, someone was actually going get paid for laying a finger on her, probably more if the show was good.

Reaching the ring, Morgan climbed up and flipped over the top rope. Well here's thinking a prissy boss bitch doesn't know how to fight. Morgan didn't really either, but she probably knew more than whoever Mika was.
_________________
Honcho's Hotshot Hostel: Character Roster

Minutes into setting one Prada boot into AFW and matchmakers were lighting up her phone like a Christmas tree. Who woulda thunk that Mika would be in such exclusively high demand? Oh that's right. She would~...As a matter of fact Mika anticipated her stock in the company would have risen even sooner had she returned the company's calls more often than whenever she f**kin felt like. Unearthing AFW's missed calls on her cell phone beneath the outpouring from ex-boyfriends, gossiping party girls, and dealer friends of hers was such a freaking drag that it was an outright miracle she was even made aware of this potential match-up before the opportunity passed her by. Mika contemplated swiping left on this match after reading the ho-hum deets, but the truth was that she was feenin to make her limelight shimmerin debut already. Plus none of her friends were down to hit up her fave nightclubs tonight. So tonight, the wrestling ring was gonna be her dance floor, whoever is standing across from her is gonna be her dance partner.
Baddest do what the baddest do
The baddest do we the baddest 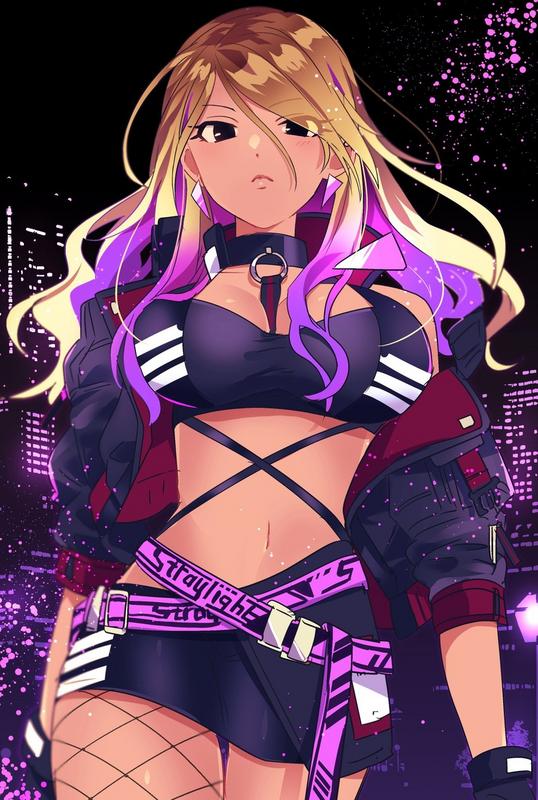 Black-lights illuminated the arena and bangin rap lyrics accompanied an entrance that snatched everyone's attention immediately. One with smooth vocals arranged alongside K-POP lyrics, was positively lit from start to finish, and precisely what Mika felt comfortable sashaying towards the ring to after makin a bangin fly-girl pose at the top of the ramp. Commanding in her stride and alluring in her beauty, but with an attitude to her presence that made it known she wasn't the bitch to f**k with. The glamorous glitterati stepping up the ring steps but not entering the ring until after signaling the referee to widen the gap between the middle and top ropes. Not sparing her opponent the slightest bit of attention as stood to be in plainview of the hard camera, offering it a sultry stare and luscious lick of her glossy lips as she wafted her hands through her blonde and pink dyed hair. Only than, with her music petering off, would she approach mid ring and cast her unimpressed eyes on Morgan. "You're like, a magician's daughter or some shit, right? So, what? You gonna cast a spell that's gonna make your fugly facial features disappear?~..."
_________________

Ah, this brought Morgan back to high school.

The one-hit wonder pop song, the hair dye with highlights, fake tans, lip gloss, and the 'any excuse to show skin for the boys' outfit were all staples of most of the popular girls. Morgan didn't know anything about Mika but even seeing her come down the ramp was enough to know that this was a girl who didn't want the shallow pettiness of her high school days to end. It was, honestly, pathetic.

Of course Morgan wasn't like the other girls. She spent her time honing her craft and performing on stage. Obviously, she was made fun of it back then but those girls never went anywhere in life. Not like what Morgan was doing now. Well except for Mika who might have just been the Queen of all prissy girls.

Mika opening her mouth had pretty much confirmed everything Morgan thought, too.

"You look and sound like you never could quite leave your high school days behind." Morgan chided her opponent, bending forward to rest her hands on her thighs in a readied stance. "Actually, you might still be in high school because I doubt you ever scored well on a test. Without cheating. My bad." She grinned, believing it too easy to come up with stuff.

"Let's face it. Your insult had about as much wit as an empty bottle and I bet you see a lot of those the morning after. People tend to throw out the bottles with the trash, huh~" She stuck her tongue out and winked. If Mika wanted to play the insult game, she'd find herself completely outmatched.
_________________
Honcho's Hotshot Hostel: Character Roster

Mika's experiences with "magic" were scantly restricted to two separate occasions in her life. Once was when her Father hired some hack magician for her fifth birthday party who couldn't even transform her pet dog into a pony like she wanted. And her second experience with magic was just when she and her girlfriends stayed up late watching "Magic Mike" that one time, except the only thing spellbinding about that movie was how much of a scrumptious hunk Channing Tatum was in that movie. And unsurprisingly, it appeared that little miss show-woman here was on course for being the dullest experience Mika's had yet with any of that Harry Potter wizardry bullshit. Mika flipping her fabulous hair with a flaunting flick before fake yawning into her hand as Morgan babbled on.

"...*yawn*...Gawd, is that your magic trick? Tah bore me until I'm freakin' comatose? Only one 'round here who seems obsessed with high school is yahself, bae. Nice to know I'm already livin' rent free in yer head, but if ya really want me to take yah back to high school, all yah gotta do is pretend this is the ladies bathroom while I'm beatin that ass and smackin you round', blondie~..." Mika uttered with a pixieish smirk while cracking her knuckles, eventually assuming her own grappling stance in concurrence with the ringing of the bell. Seemingly intending to lock horns with Morgan given her stance...except instead she'd underhandedly punt the magic woman in her breadbasket with knee strike once they locked up. Afterward disrespectfully discarding Morgan to the floor beneath her.
_________________