Breathe in, breathe out. Breathe in, breathe out. Kazuma took deep breathes as he mentally prepared himself before he stepped out into AFW's Tension arena for the very first time as a wrestler. Sure, he had been in the arena earlier but it wasn't in front of thousands of cheering fans back then! He hadn't felt more like a Isekai protagonist than the day of his near death experience before now. Still he was here now, the place he had worked months and months to get to since he had first heard of it now was not the time to be nervous especially since his opponent for the night was the very guy that showed him around earlier.

Kazuma did one last equipment check, making sure that he was all set before he stepped out in front of the audience. Once he was done Kazuma began to make his way through the halls, towards the gorilla position, noting all the various other wrestlers that were sizing him up for any future encounters they'd probably have with him in the future, he wouldn't let them intimidate him though. Finally, he arrived at the position and just in time as he was approached by a stage hand.

"You ready kid?" the stage hand asked.
"As I'll ever be." Kazuma replied as he walked over to the curtain and waited for his music, Rise by Madkid, to play over the speakers. Once it did Kazuma stepped through the curtain and let it all sink in as the fans cheered his entrance. It was.....a lot to take in, more than any promotion he had been in but he couldn't just stand there looking star struck at the top of the ramp all night. Kazuma began to make his way down to the ring, high-fiving and taking pictures with some of the fans as he went before finally getting into the ring. Kazuma walked over to one of the corners and climbed the turnbuckles and gave a loud cheer for the crowd. He then jumped down and turned to look at the ramp, waiting for Edward.
_________________
Satou Kazuma
Sachiko Kanda

Backstage, Edward Sealgair was just finishing putting his hand-wraps on, making them nice and tight, and slipping his sleeveless jacket over his body and making sure his boots were on tight, checking himself in the mirror in his locker, before, satisfied with his look, he closed it and made his way to the gorilla position, already hearing his opponents theme music playing.

Tonight, his opponent was unique. A complete newcomer to the league named Kazuma, a very cute fellow teenager whom Edward had met recently and given a full tour of the Tension compound too, making a new friend in the process, with Edward offering to be the newcomers first opponent. Since then, they'd communicated by text a few times, but this was their first face to face encounter.

Finally, his music began playing, and Edward would come onto the ramp, clad in the same pink and white attire he had originally adopted during his match with Valley Doll. 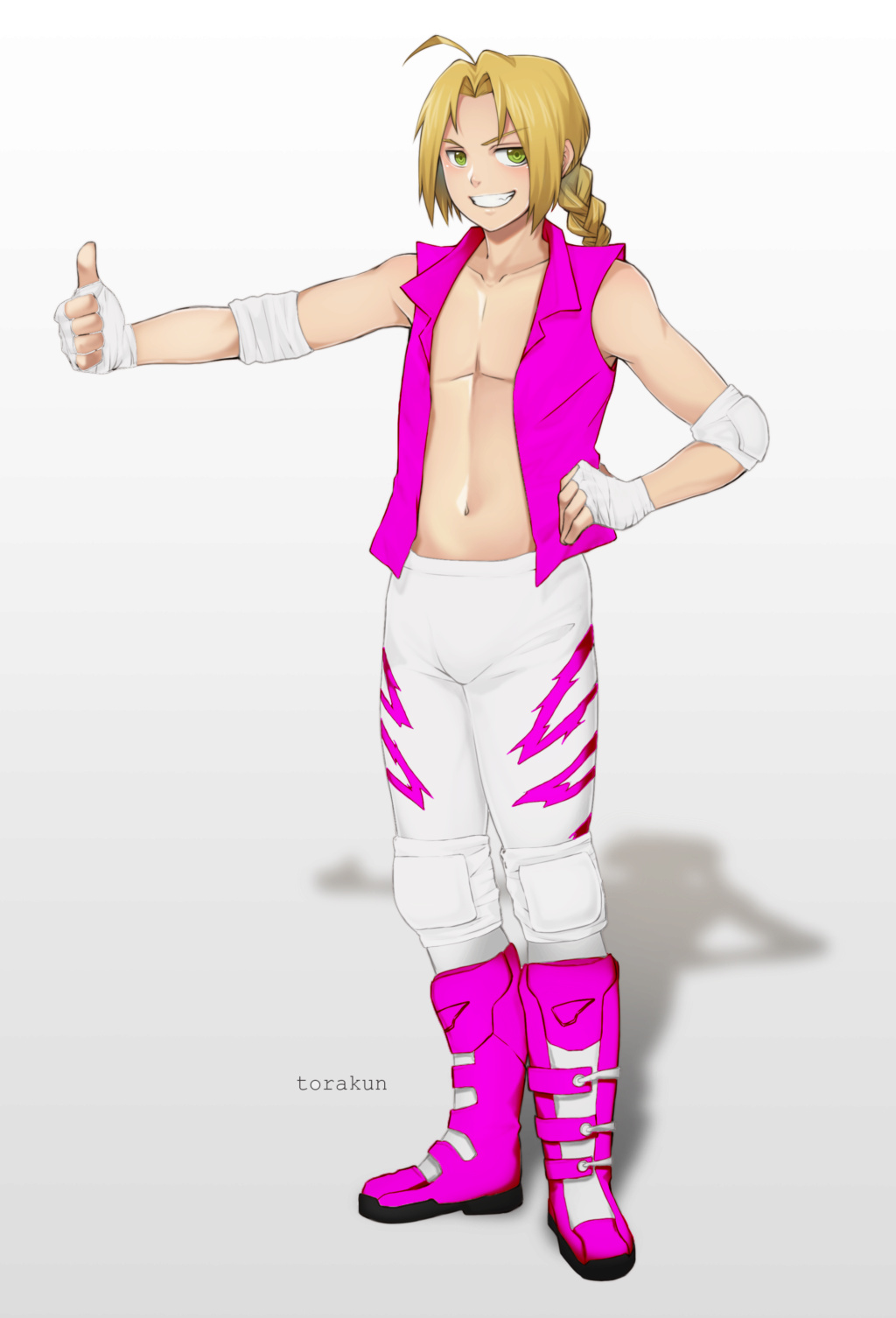 He charged down the ring, leaping once he was near the apron to clear it completely, his leap taking him between the middle and top rope, before landing in the ring by rolling onto his feet and shooting back up to his feet, raising his arms up for the crowd before turning towards Kazuma and flashing him a thumbs up, taking off his jacket to reveal his bare chest and thin, but strong muscles.

"Good to see you again buddy! You ready for a good match? I promise I won't go easy on you just cause its your debut...just eh, don't be too distracted by the blonde locks and the bare chest, alright?" Edward said playfully in his scottish accent, wanting to put his friend at ease without pandering to him.
_________________
Check out the recently revamped Roster Page, now with pics!

Kazuma spent the time he had waiting for Edward to calm his nerves, this was his first ever match in AFW so there was naturally going to be a lot of pressure on him to perform at an acceptable level not just for the crowd but also for Management, whomever that maybe in this instance. The crowd seemed to like him enough, now all he had to do was make sure that he didn't screw up in the match.

No sooner did that thought cross his mind that Kazuma would hear the entrance music of his opponent for the evening. Some might say that pink wasn't a very manly color but if Bret "The Hitman" Hart could make it work then Edward could too. Kazuma watched as Edward charged down the ramp towards the ring and in an impressive display jumped from the ground and through the middle and top ropes. The feat certainly got the crowd excited and Kazuma couldn't help but join them in applauding him.

Kazuma watched as Edward took of his jacket, earning more than a few "enthusiastic" cheers from the crowd in the process. He was briefly confused when Edward asked him to not get distracted by his good looks but he brushed it off. "Oh don't worry, I couldn't be anymore focused on this match if I tried." Kazuma replied and waited for the referee's go ahead for the match. After giving both wrestlers one quick look they gave the signal for the bell to ring and the match was under way. Kazuma wasted no time running at Edward and would leap into the air, attempting to hit Edward with a dropkick right out the gate.
_________________
Satou Kazuma
Sachiko Kanda

Edward nodded at Kazuma's statement that he was ready and focused on the match. Nice dude, this Kazuma, Edward was really eager to see just what he could bring to the table. It was always nice to get to wrestle against someone his own age and similar rookie level and see just what they could do.

Plus...if he was being honest, this guy was super handsome and cute and Ed wanted to cuddle him if he could.

Buuuuut he was pretty sure that would be not a good thing to do, plus, a match was hardly the right time for such a thing, now was he?

The bell rang, and Edward put his hands up, certain that this newcomer would want to start with a standard lock up to begin...but was taken by surprise as Kazuma charged at him, then leaped into the air, done with enough to speed that Edward could barely cover his chest before Kazuma's booted feet smacked into his chest, dropping him onto his back, with enough momentum that Edward was able to kick his legs up and roll backwards to get back on his feet, wincing and rubbing his bare chest where Kazuma had kicked him!

Kazuma's early leap into the air came with a lot of risks. If Edward was the slightest on guard then he'd easily be able to avoid the drop kick and punish Kazuma for it, fortunately that was not the case and Kazuma was able to drive both of his feet into his unguarded chest. Kazuma fell to the ground, of course his was a bit more controlled since he was the aggressor.

Kazuma would hop back up to his feet, much to the cheering of the crowd. This was a good start for him, which was good but he couldn't let himself get distracted, at least so early in the match. Kazuma would then approach Edward and reach down to grab his arm. He would pull him up to a vertical base and then attempt to Irish Whip him into the ropes. Once he was close enough, Kazuma would attempt to then super kick Edward in the face and go for an early pin...Unless Edward got back to his senses of course.
_________________
Satou Kazuma
Sachiko Kanda

Edward would have LIKED to claim that Kazuma's dropkick hitting was a fluke, a lucky shot, or that he allowed it to give the younger fighter a fun moment for his debut...but that would all be a lie.

Truth was, Edward hadn't kept his guard up, and the rookie got in a good one on him as a result. So much for taking things easy then.

Being light, Edward was easily pulled up to his feet and sent whipped towards the ropes, hitting and rebounding off of them, his eyes widening from curiosity to panic as he saw the telltale signs of an incoming superkick coming his way from Kazuma!

Ducking his head low just in the nick of time, Edward avoided the kick itself, the braid of his ponytail taking the blow instead, and continued running towards the ropes behind Kazuma, leaping when he was close. Landing both feet on the middle ropes, he began to turn his body and launched himself off, turning in mid air and spreading his arms and legs out, trying to catch the rookie off guard with a springboard crossbody right off the bat!
_________________
Check out the recently revamped Roster Page, now with pics!

Kazuma had expected Edward to easily run into his super kick attempt as he ran back towards him....only the impact never came. Instead he would watch as Edward would duck beneath his raised leg and fly past him towards the rope behind him. Kazuma would turn around and watch as Edward would jump onto the middle rope and launch himself off of it.

He'd be a bit too late as Edward came flying towards him, twisting his body as he did so to hit Kazuma with a flying cross body! Kazuma would fall onto the mat, Edward on top of him and try to push him off before the referee could attempt a pin count on him. "Should've known you wouldn't go down that easily." Kazuma said to Edward as he tried to get away from him and rethink how to go about this match with Edward.
_________________
Satou Kazuma
Sachiko Kanda