The Adventurer faces a trap! Kazuma Satou vs Jasper A. Rhys

The Adventurer faces a trap! Kazuma Satou vs Jasper A. Rhys

It was time once again for Kazuma to put on a show for everyone. However the show this time was going to be something special as he heard that his opponent for the evening was something of an....oddball. Kazuma didn't mind however, what was wrestling if not two or more oddballs going at each other for the entertainment of everyone else. Kazuma would tie up his boots and after giving himself a final look over before he would leave the locker room and head out to the ring.

The entire time he looked around, seeing neither hide nor hair of his opponent for the evening. Well he was sure they'd show up soon enough. Kazuma would make his way to the gorilla position and as soon as his music played he'd step out from behind the curtain and make his way to the ring. Once inside he would walk over to one of the ring corners and wait for this "Jasper".

It wouldn't be long for Kazuma before his opponent made himself known with the speakers suddenly playing the opening notes to his entrance song, the up-beat J-Rock tune building up quickly, reaching it's famous before suddenly with little warning as the climactic lyric "STAND UP TO THE VICTORY!" was uttered, a pleasant cheer from more than a few of the audience members in attendance would signify the appearance the 'Adventuring advocate of gender equality's opponent, the androgynous little Welshman running out of the gorilla position opposite to Kazuma's own entrance-way and down the ramp and up towards the ring, with a calm haste the feminine boy climbed into the ring and bowed down to the adoring crowd and then looked at his opponent, offering him a friendly if-not eager smile. 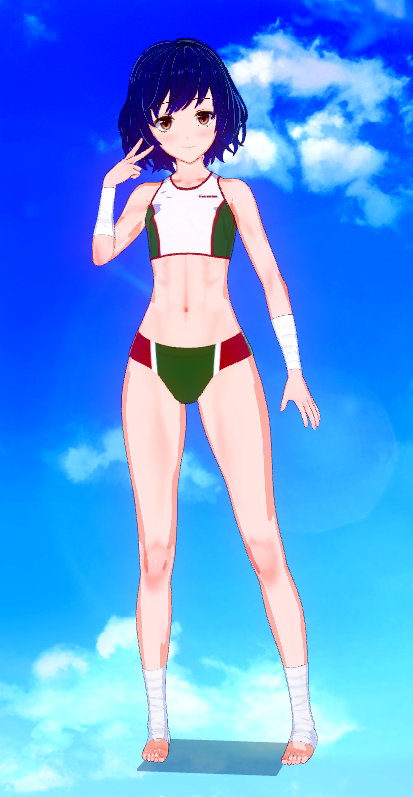 ...Internally speaking, Jasper was quite proud as merely a scant few days-to-a-week ago he'd really proven himself in Showdown in a surprisingly popular pre-show match where the little Welsh wrestler faced off against a spiteful rabbit and his giant of a wife and somehow came out on-top despite the pair's underhanded tactics and superior size and strength... so the young Welshman was quite eager to again prove himself to the loving Tension audience with another match, this time against another male wrestler who the little bluenette had heard a little bit about but didn't really have much to go off of with regards to what-to-expect and how to deal with him, so Jasper expected that he'd be doing a lot of improvising this time around... Despite that the little Welsh bluenette remained confident if-not a bit bubbly and chirpy.

"...Why hello!" He said with a kind tone to his voice, genuinely interested in seeing if this guy would be friendly. "Hope you don't mind that I'm your opponent for the evening." he added, walking over to Kazuma to offer him a handshake with a hand placed casually on his hip.
_________________
Snow's Heroes
(Or Razor's Aces.)

Kazuma looked as his opponent came down the ramp, it appeared that management had decided to pair Kazuma up with a very cute girl(?) this evening as she came down the ramp all smiles, the crowd simply adoring her. When she finally came down to the ring she'd give the crowd a bow and gave him a smile. It honestly felt like a nice change of pace to be competing with a cute, pure looking girl instead of some lustful, mature woman. Her greeting was respectful but Kazuma noticed that her voice seemed to have a bit of a minute masculine tone to it.

Still it was only fair to return such a polite greeting. "Hey, it's nice to meet you. I don't mind you as my opponent at all. Honestly, a match against a cute girl like you is a great change of pace." Kazuma said as he took Jasper's hand and shook it, unaware of Jasper's true identity.

The smaller Welsh boy looked up at his opponent and smiled warmly at him as the two shook hands, however soon enough Jasper would change expression to a slightly embarrassed look of surprise as Kazuma well, effectively misgendered him... Something that Jasper didn't mind but considering how much time he's spent already in Tension and how popular he'd been getting, well it surprised him to know that there were some people in the roster who didn't know that he was indeed well.. Male! "Why Thank- Y-you." He said, stammering the last words however suppressing his flustration and mild annoyance as a mischievous thought came into his head.

"Yeah, I am a girl yes." He said softly under his breath hoping Kazuma didn't notice as he flashed a rather cheeky, if-not smug grin. "Now, well I guess either now or in a minute we'll start our fight then?~" Jasper said with a mildly playful tone to his voice in that famously strong rural South Wales accent as the small (and Really quite) androgynous boy positioned himself into grappling stance.

Immediately after the feminine male's entry into the stance, the bell rung to start the bout between the clueless adventurer and the cheeky trap!

Kazuma raised an eyebrow at the Jasper's stammered response, even more so when he thought he heard Jasper say to "herself" that "she" was a girl like "she" was trying to reconfirm "her" gender. Sure it was odd but he felt like there was a bit of annoyance mixed into Jasper's tone. "Looks like I may have said something I shouldn't have." Kazuma thought to himself.

Regardless though, Kazuma would reply to Jasper's question with a practiced smile. "Yeah, I guess we. May the best person win." Kazuma said as he went back to his corner and not long after would hear the bell ring signaling the match to begin. "Okay let's start this off fast." Kazuma thought as he then proceeded to rush out of his corner. His goal was to grab a hold of one of Jasper's arms and Irish Whip her into the ropes and, if successful, proceed to drop kick Jasper as "she" came back.
_________________
Satou Kazuma
Sachiko Kanda

A Cheeky grin formed itself on the face of the impetuous little Welshman as he looked upon his opponent, mischievous ideas filling Jasper's head as he watched the Adventurer make his way back towards his corner of the ring. "You too Luv." The boy playfully replied as he made his way towards his own corner...

Keeping his eyes on his bigger foe, the small Welshman would rush towards Kazuma and decidedly avoided his attempts at grabbing his arms, instead snickering and skipping away from him. "Missed me!" he teased as he kept his distance, reaching Kazuma's corner and smirking at him. "I Was told that you're a fast one, but nah, you seem pretty slow to me~." He exclaimed, a combination of his inflated ego and playful temperament making him all the more impetuous tonight.