Match stipulation: Iron man/woman match with no DQ and no referee. Rounds can be gained via KO (lifting and dropping the unconscious opponent's arm 3 times) or verbal submission.

The arena was exceptionally crowded and noisy tonight, which was not a surprise considering the match stipulation, Ataru thought while running his way to the ring giving random hi-fives to the roaring fans. Once he was up there, the handsome young wrestler tossed his hoody jacket to some screaming girls, showing the well toned but certainly not massive muscles on his body.

A great match in a crowdy arena was always exciting, and a good chance to improve his not-so impressive win/loss record too, though the idea of fighting a completely unknown female opponent in a one-hour match with unlimited bouts and virtually no rules  admittedly made him a bit anxious.

"Alright, I just have to stay calm and focus on my own game. Let's just hope she is not too massive, or too lewd.. h-hehe... o///o",
He smiled nervously to himself at uncomortably remembering some of his latest, unfortunate matches.

Music plays from the speakers as a massive figure walks to the ring every step Cattleya takes her massive breasts jiggles and moves all over inside of her tight blue one piece swimsuit. 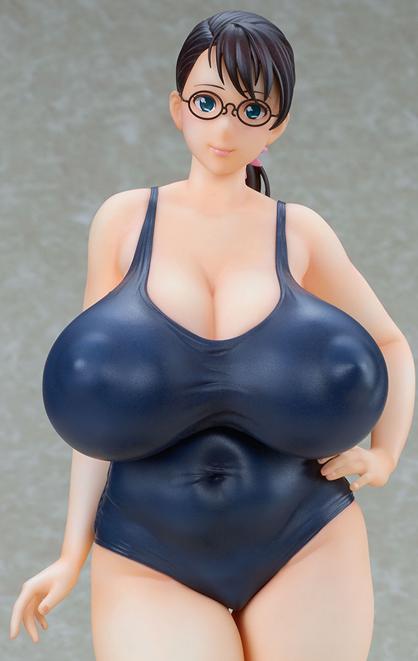 The crowd cheering on seeing the woman figure and what she has on already knowing who going to win this match before the bell even rings.

Cattleya enters the ring walking to her smaller male opponent holding out her small hand before giving him a big hug. Buring his face already between her massive breasts. I want to say good luck and please have a good match i would hate to see a small thing like you being hurt she says in a motherly tone of voice before letting him go and going to her corner waiting for the bell to ring to begin the match.

Ataru's face turns colors as the bustiest wrestler he ever seen appears on the ramp, her huge bosom bouncing suggestively with each step she takes.

"N-nice to meet you too and good luck for-mghfh? Mmmffhh..!"
His silly voice is effectively muffled into her motherly pillows, leaving him dazed and utterly embarrassed when she eventually lets him go.

She says going to the middle of the ring and watches in amusement as this little boy trys to wrestle her and try to win. Lowers her hands so that they are at his level for a test of strength wanting to allow him a chance... no matter how small it is at seeing what he can do in this match before crushing him.

yes you are a strong little boy who going to feel mommy body all over you.. your going to be calling me mommy from now on little boy before tighten the grip of her fingers bending the poor boy backwards slowly forcing him to his knees due to her strength, breasts starting to bounce in his face from how close they are
_________________
The Rider Fraction
https://www.afwrpg.com/t20148-the-riders-fraction

"T-that's not going to happen..! 0///0",
Ataru would reply with more nervousness than he'd like to admit in his voice, feeling utterly embarrassed as Cattleya's mommy-baby attitude effectively plays mind games with the young boy, making him flustered and intimidated.

And in spite of Ataru's wannabe-defiant words, the gap in size, height and strenght becomes hugely evident when the contenders engage a test of strenght: pumping his muscles proves to do nothing against Cattleya's strong voluptuous body, and soon Ataru is slowly but surely pushed down to his knees, without a sweat from her part in contrast to his futile, groaning efforts.

"D-dammit... Uhh. 0///0",
The boy's face turns to a brighter shade of red at the sensually taunting sight of those massive motherly melons bouncing so closely over his face, enough for him to feel their radiant warmth.

Humiliated and embarrassed, Ataru tries at least to pull back from the test of strenght but, squirming on his knees with fingers entwined in her strong grip, it doesn't seem like the cute struggling boy can go anywhere.

see baby isn'tit better to just give in to mommy, look at you trying to be strong for mommy my brave little boy.
Cattleya says before using more of her strength to keep pushing him down to both knees, at the prefect height of him being face to face with her mound. Which is starting to get wet and he can see the wetness between her legs due to a stain forming on her swimsuit.

now you have a choice you can either call me mommy and I take my foot off you or you say nothing and be a bad little boy, then I would either put my other foot on your head or bonsai drop your chest.. your choice little one
She asks him watching him struggling and giggling in a motherly tone before bending foward to increase the pressure on his chest.
_________________
The Rider Fraction
https://www.afwrpg.com/t20148-the-riders-fraction

Ataru is regretting his starting move: engaging such a bigger strong amazon into a test of strenght has proved to be not the smartest choice, but it is too late for second thoughts now.

Pressed and stretched back into an ever more uncomfortable position until he is pinned underneath her foot, Ataru would have wanted to yell in defiance at her humiliating request, but her playful threat and his current state of immobilized helplessness suggests him to think carefully about the pros and cons.

"Ok... I hate the idea of giving in and calling my opponent "mommy"... but it's my best chance to get out of this situation.. I can always get revenge once she lets me go... o///o".

Eventually, the groaning flushed boy decides to temporarily swallow his pride, for his own good.
"Urrghh... p-please mommy... s-stop it.. urghh...".
Whether his humiliating choice will grant him freedom or just fuel up Cattleya's motherly domination joy, it is yet to be seen.
_________________
Ryu's team:

good boy was that so difficult to do.. I think you deserve a reward for listening to mommy oh yes you do.
Before dropping straight onto his chest with a bonsai drop, her full weight taking the air and fight out of his lungs and making his legs go up in the air.

Sitting on his chest before starting to slowly slide up his body making him feel how heavy she is before sitting on his face. Looking down at him as his head bearly can be seen between her thick big thighs.

"Uuungghffhh... ! o///o". Ataru's wind is pressed out of him by Cattleya's massive derrièere, leaving him gasping and unable to respond for a few seconds, except for some breathless groans.

Watching her scooting up to facesit him and taunt him with more humiliating choices to make, the young boy realizes that there will be no end to this, unless he can't fight back and flip the table.

"E-Enough...! I won't be turned into your obedient.. guuhhh.. p-plaything... I must fight back and esca-pmffhhhff... blubbb... @_@".
Ataru's heroic speech is cut short as Cattleya smothers his comparatively tiny face underneath her huge ass. His desperate, ineefective pawing at her hips only add to her fun, while the much smaller boy is easily swayed side to side along with the rocking of her thighs.
_________________
Ryu's team:

since your going to be a bad boy let see how long you last then
She says before starting to bounce on his face, her massive ass slowly crushing his small face between her ass cheeks. Taking his breath and smothering him out each time she bounces hurts more then last.

enough games it time to win and take my time with you little boy
She says, taking her nails and raking them on his small chest. Her hands sliding his pants down and places a claw hold onto his stomach squeezing it in her grip hard to hear him scream.

that should be one point for me since you can't breath back there.. is my ass to bug enough for you little boy or would you rather taste mommy pussy.
_________________
The Rider Fraction
https://www.afwrpg.com/t20148-the-riders-fraction