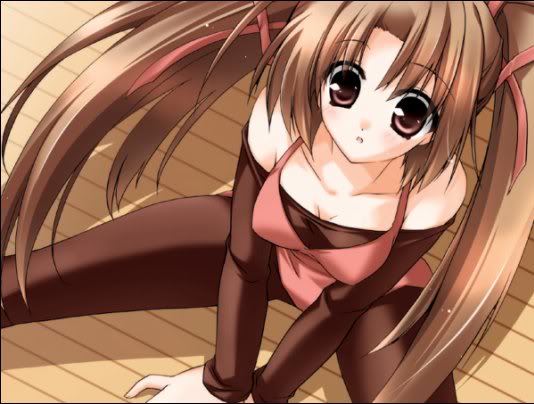 Fighting style and moves: agility based moves, drop kicks, scissorholds, octopus hold.
Finishing moves:
Hot Stretching - grapevine hold where Aiko makes full use of her flexibility to painfully stretch and spread an opponents' legs apart. She than starts pushing her hips back and forth, against opponents' crotch, aiming to submit them from either painful stretching or sexual humiliation.
Purrfect Landing -  Frankenstiner throw -facesitting pin combo: Aiko will wrap her thighs securely wrapped around the opponents' head frontally and throw herself backwards, hopefully ending in a straddling pin with her crotch grinding opponents's face.

Past: Aiko is a former gymnast who was disqualified from competitions when she went mad on a cheating rival and decided to make herself justice, trapping the other girl in several embarassing submissions. When one of the judges came to stop the brawl, the furious Aiko gave him some of the same medicine. That was the end of Aiko's career in competitve gymnastics... and the starting of a new adventure: some AFW manager noticed her "performance" and convinced her to join Friction.

Attire Usually fighting with a tight gymnast suit, meant to both show off her sports background and her petite yet well toned body.

OOC: Aiko had joined Friction in order to test her skills against bigger wrestlers but, after a hot and pleasurable spar with the fellow gymnast Gemma Piper she decided she would love to be in the Kawaii legue too.
_________________
Ryu's team: