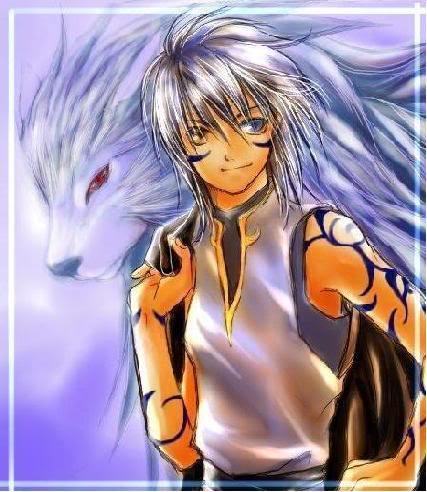 Personality:
Okami's personality can be described in 2 words: instinctive, ingenuous:  he can be go berserk during a tough fight against strong male opponents, but he is nervous and easily flustered around women... and gullible, which will turn at his disadvantage in mixed matches. Sensuous attacks and feminine distractions are the big points of weakness in his fighting: he wish his female opponents would stick with "traditional wrestling"... but that rarely happens, especially when they realize the advantages they can gain from teasing such a boy like Okami, easily embarassed and uncomfortable at the idea of punching against a girl.
In short, Okami's fighting potential is reduced against female opponents who know how to use their femininity to sway a guy off his game.

Story:
Okami grew up all alone in a forest in Okinawa as a wild little boy (maybe the lost son of some of those legendary Japanese soldiers who kept believing for years that the II World War was not finished). Escaped from an orphanage at the (supposed) age of 7, he lived as a street kid until he was taken under the wing of a Yakuza clan. They "completed his instruction" making him into a fighter toi throw into illegal underground matches. As soon as he got the age to decide what was right and what was not, Okami ran from his criminal "adpotive family", aiming at a "normal life". Not being skilled in anything in particular except for fighting,  he decided to make it his job, and one day he bumped into this new wrestling business called Tension. The pay was good and it looked like some beautiful girls were going to be part of the show too. No more brutal underground fights, and a number of lovely girls as collegues??? Okami didn't have to think twice to sign the contract. What he didn't know was that this wrestling show is a bit... different. Mixed wrestling matches with plenty of embarassingly erotic stipulations anda mischievous vixens were ahead of Okami, and soon he would realize that his previous fighting experiences against bad, ugly guys had not prepared him for... this!

Fun facts: The guys who found him in Okinawa thought that Okami (which is Japanese word for "wolf") would be a good name for a kid who had been found in a forest. And so the name stayed during his underground fighting period. Because of his peculiar hair, he was sometimes called the Silver Wolf or the Snow Wolf, just to make his presentation more theathrical. Okami hated it, but somehow it remained sticked to his wrestling persona when he joined AFW. So in the end, Okami is also known as "the wolfboy" by many Tension fans, regardless of his will.