So then when it was time to appear, she would greet the entire audience, blowing kisses in the air for everyone, very happy to be back in the ring, to finally go up and stand in his corner, and She would wait for the arrival of her opponent

Reference suit (instead of black, it's a caramel red):

Invading from Friction, Raposa decides to have a match in Tension to see how the ladies here are. 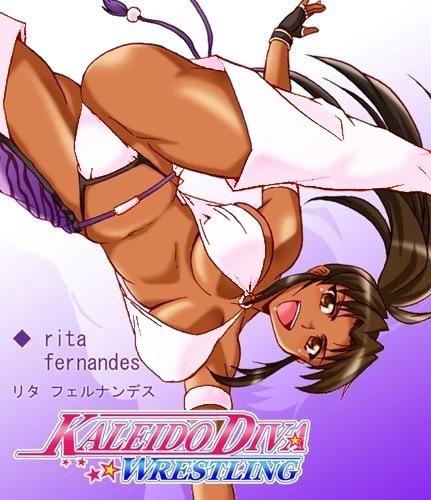 She comes out in a light pink version of her outfit, arousing this new crowd with her revealing looks. She does her signature entrance: bends her ass and slaps it for the crowd, skips down the runway and a twirling hip dance by the apron, straddles the center rope and wiggles her ass for the camera that zooms in, goes to the corner of the ring on the middle ropes to blow kisses, then backflips to the center of the ring before leaning against her corner.

Miku was really excited to think how her opponent would be, finally seeing her appearance, and she really was quite an energetic woman, something Miku didn't really expect, so she smiled towards that woman, finally approaching to shake her hand in order to give her a nice greeting.

Raposa takes the handshake, but decides to be a little devious. She pulls Miku’s arm and shoves her against the ropes. Once she rebounded back, the capoeirsta would aim to take her opponent down with a hip attack to her face, hoping to give her the best view of AFW’s best ass.

Miku seeing that Raposa would accept her grip, but everything would change when suddenly, she would be thrown against the ropes, something she had not expected, being there, she would see how Raposa approached and with agility, she would be hit with her hip, Miku would receive the impact, but she would stand up, and knowing that she should not lose any moment against this woman, Miku would only try to place her hands on Raposa's waist, to hold her tightly and have some control over her.
_________________
My Roster!

Raposa would shake her ass at a fallen Miku, taunting her Brazilian hips.

“Was my ass too much for you?” She berates, but not before being grabbed from behind. Miku wrapped her arms around Raposa’s waist, causing her to fall back against the ropes with her opponent. Miku would hold on however, she slipped to where her head was against the Brazilian’s rear end. The capoeirsta saw a good opportunity from herself pressing against Miku on the the lower rope. She grabs the top one with both hands on each end and slams her rear into her face before her booty against it, giggling from her humiliating tactic.

Miku had not expected at all that her move would turn against her, as when she managed to hold Raposa, she would take advantage of it and smash Miku's face into her butt, using the ropes to cause additional damage, Miku would just gasp at Raposa's butt, but knowing that she should not just be there, Miku would try to use her tongue to see if licking around that area would get her anything, although she was very doubtful about that.
_________________
My Roster!

“Hehe, like my ass that much?~” She teases, rubbing her soft butt into her opponent as she licks it. Miku’s vision should only see her ass and light pink thong as the capoeirsta is having fun humiliating her and hopefully, arousing her as well.

“I’m used to having my Brazilian booty worshipped. I can go all day, hehe.~”

Miku knew to this point, her tongue didn't seem to be accomplishing anything, so knowing that she should do something, she would use her legs to try to stand up, while her hands moved Raposa, looking to move her and make her unable to have much control over the movement, adding to Miku that the air was starting to get thin.
_________________
My Roster!

The capoeirsta felt her opponent use some more force, her butt being pushed as Miku stands up. She staggers forward a bit and tries to rebalance herself at the center.