After having some time in the Tension Roster wrestling and having her way with men, Soraya decided to mix things up a bit in her wreslting career. As a result of her deciding to mix things up a bit she decided to enter the Friction Roster for some fun and to see if anything would actually come of it. She had a lot of scepticism for finding this this any fun, let alone getting an actual match! One day after signing up she checked with the office to see if anything was lined up for her, only to find she had been lined up for a match with another newbie to the roster. This surprised her as she did not think she would get any offers but now she had an offer she took it with great delight and could not wait to have fun with her first girl in the ring as she walked out of the the office smirking. Plus the match that she was scheduled to fight in was also tonight in the main arena at AFW too! So with that in mind she get herslef ready and pumped for her match that evening.

That evening she got to the locker room and sat down wondering if she should change anything about her attire because it was another female opponent after all so the same chamrs may not work on her. After much thought she suddenly remebered that it was a hentai match so in that case she would slip on what she would normally wear. She slipped on her loincloth followed the rest of her attire of a red lacey bra to squeeze and hold those voluptous breats in, covered by a thin, skin tight white blowse. Now the top half was done she slipped on her red fishnet stockings followed by her open toe heels. She sauntered over to the entrance and waited for her entrance. As the music came on darkness descended and smoke filled the arena as she sultered on down the ramp in her outfit as her girls bounced, trying to break free of their confines and her ass, barely covered by her loincloth, jiggling.

Once she got to the ring she somersaulted over the top rope as she landed in the splits. Then she rolled her body as she got up and walked in a sultry manor to her corner. On reaching her corner she started to stretch waiting for her opponent to arrive in the ring..............
_________________
Tension:
Cody James
Soraya

Raposa’s first match on Friction. Confident in herself, she believes no one can resist her voluptuous charms and movement. There’s no way a woman could resist her body, so a match like this would be no problem in her mind. She puts on her gear slowly as she hears her opponent’s entrance. She pulls up her yellow thong that practically reveals her entire ass. She slips into her matching pair of chaps, which are tied to a bra that squeeze gently against her breasts. 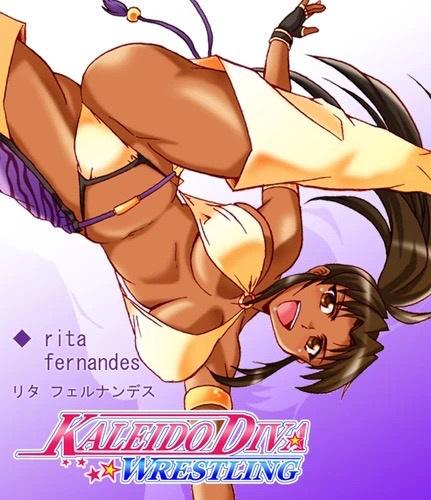 Her song plays and she comes out to an arena full of people cheering. She spins around and bends over to give a crowd a nice view of her self-proclaimed perfect ass. As she rises back while shaking her butt vibrantly, she stands up and looks back at the ring before giving her booty a satisfy slap that makes it jiggle. She skips to the ring and twirls around as she moves her samba hips near the apron. She jumps up to the ropes and gets between them while straddling the center one. Before getting in, she tells to camera man to zoom on her eye-catching rear as she shakes it side-to-side. She finally steps through the ropes and stands up on the middle ones in the corner opposite from her opponent, bending over and blowing a kiss to the audience before backflipping off of them and resting her back against the turnbuckles, looking at Soraya for the first time.

Whilst she was stretching bending over and stretching down ensuring she was warmed up and flexible for her first match in AFW Frictions, she heard her opponents music play and stopped stretching to look up. What she saw was what looked like another fellow dancer although, obviously, not a sultry or as beautfiul as herself! Hearing the crowd cheer for her was going to make this match even sweeter When she wins and humiliates her in public, infront of this audience. Watching her slap her ass, making it jiggle, and the way she skips and twirls to the ring made her think she was up against another dancer like her. To be fair those hips did look good as she sambad her way down before showboating to the camera, obviously she has a thing for her ass so maybe she has a thing for asses!

Soraya turned back around ignoring her opponent and continued her stretching as the bell went......
_________________
Tension:
Cody James
Soraya

“Come on,” taunts Raposa. “Show me what you got.” She turns her backside to Soraya and shakes her ass toward her direction. She was prepared to dodge a hit, planning to slide underneath and grope the fellow dancer from behind.

Smirking as she turned around "You can't rush perfection dear" As Soraya got more of a hint about what her opponent clearly thoought was her best asset "I will show you of course!" Walking to the center of the ring as her hips swayed from side to side she stood there with hands on her hips. Shoe stood around waiting for her to come at her but then got inptatient and ran at her hoping to go for a quick jab to her spine to start off the match thinking this will teache her a lesson in turning her back to me!
_________________
Tension:
Cody James
Soraya

Raposa’s plan works! She slides between her opponent’s legs and quickly graps the groin of her fellow dancer, rubbing two fingers against her womanhood. Faísca prepares to get checked with an elbow strike or backhand, ready to duck it and use it as an opportunity to sweep Soraya off her feet and onto her back.

Soraya growled at Raposa as her womanhood was rubbed as the skinny dancer slide underneath, between her legs, to avoid her jab. Annoyed at this she quickly turned around and went for a quick roundhouse kick hoping it would connect to knock Raposa back to get some space between them. If this worked she would now simply wait for her opponent to come at her.
_________________
Tension:
Cody James
Soraya

Surely knowing that she was pissing off Soraya, the capoeirsta was staying a step ahead on reacting to her opponent’s retaliations. With momentum on her side, Raposa dodges an incoming roundhouse kick by ducking using her capoeira movement and goes for a kick to the knee. If she hits that, she’d perform a jaw shattering wheel kick.

Soraya thought this would be an easier win than what she is currently having to go through as her knee gets kicked before seeing a wheel kick coming at her but was too slow to react with the speed.

The wheel kick knocked her to the ground before she quickly rolled away across the ring and tried to get up back to her feet, away from Raposa trying anything else.
_________________
Tension:
Cody James
Soraya

Seeing Soraya about to get up, Faísca hits the ropes behind her and charges at the fellow dancer. The capoeirsta jumps at her oppoent’s head with her legs wide and wrapping it tight between her thighs. She would then attempt to flip Soraya over on her back using her momentum, hoping to find a sexual opportunity afterward.