» A Belly Détente
by Mystery Dragon Today at 1:41 am

Abilities: Chameleon stealth, acid spit and regeneration.
Strengths:  Immune to any physical attacks due to hardened scales, super strong tail (Largest and most powerful muscle in his body.
Weakness: Magic, particularly anything of a sexual nature.

Special moves:
Spinning tornado - like a table top spinner spinning around but with a leg out to hit any opponent nearby
Channel Chi - Channels his inner strength but takes time
Release Chi - Series of punches and kicks aimed for an all over body assault
Confusion - Uses chameleon ability to make noise around the opponent, confusing him/her
The Squeeze - Using his powerful tail he can wrap his tail around him/her until they asphyxiate
Tail Bash - Does exactly what it says!
Acid, only if desperate - Acid that can burn through almost anything!

if sex related magic is used on him)
Arousement:

if sex related magic is used on him)
Technique:

Thinking by the Pool 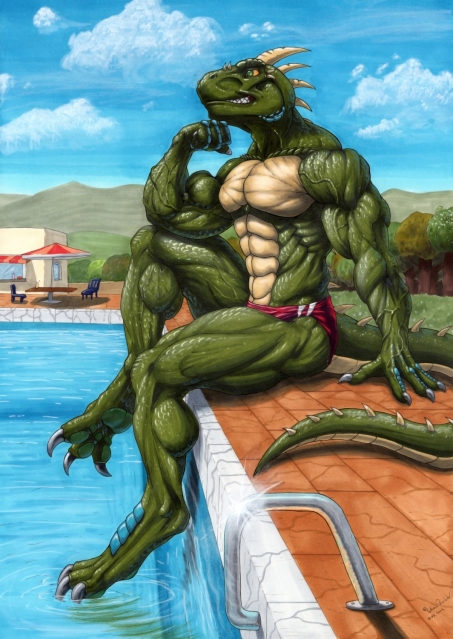 History/Background: Originally born with the appearance of a human into a normal family but when his skin started to turn green when upset his family abandoned him in the mountains. He was then taken in and trained by the Shaolin monks in the art of Pào Chuí. As he grew older the reptilian likeness became more prominent but as these traits, good or bad, became more prominent the monks taught him a way to control his reptilian heritage. This heritage still comes out to play, when threatened.

Due to the training by the monks he has become an honourable and respectful warrior. He has only ever used his reptilian side when a threat is imminent. Due to him being the only one of his kind he has a large soft spot for anthropods like him and longs to receive the affection of a female like him.

Re: Reptile - The Reptilian