Fangs and Fists- Cobra vs Gai!

Fangs and Fists- Cobra vs Gai!

*Rolling his neck in a circular motion, Cobra was tingling all over from what was in store for him tonight- Being the fresh faced tour de force acquisition on the AFW circuit, Trent had no intentions to remain sedentary, already eager to start taking on anyone and everyone who wanted to get a piece of the reptilian renegade. Fortuitously for him, he wouldn't need to look too far- A stern looking individual who went by the name of Gai demanded that he proved his worth in the ring, which Cobra humbly accepted.* "He thinkssss I'm going to be an easssy target, which is precisssely what I want him to believe~" *The mischievous viper hissed under his breath while yanking his shorts up, twisting them across his hips before extending and retracting his fingers to wake his joints up.* "I'll leave him begging for mercy before showing him none!"

*After the preparations were complete, Cobra shot himself a menacing glare in the mirror, reminding himself of just how intimidating he was capable of being.* "Ssssss!" *He flicked his tongue out at his reflection before exiting the locker room, trotting towards the opaque curtain with a menacing leer plastered across his face. Before long, he'd reach the edge of the thin layer diving himself from the thousands of spectators in attendance.* "Hmhm, time to impressss and finesssse~" *And with that, he unveiled himself to the fans, receiving monstrous applause in the process.*

"That'sssss what I thought!" *Absorbing the energizing sensation that the audience gave him, Cobra swung backwards and struck his signature pose: Bending his legs, he swung his arms out behind his backside before allowing his forked tongue to slither out of his maw, with the vast majority of viewers mimicking his motion in tandem to show their appreciation for his unique entrance.*

*Proceeding down the ramp with a glint of elation abundantly present in his eye, Cobra hopped up the steel steps and slipped in between the opening within the ropes, approaching his neutral corner with a smug expression.* "Let'ssss see him try and beat that~" *The haughty serpent muttered to himself, anxious to see his opponent's introduciton.*

Gai Tendo, the Buriki-One King...was not a happy camper. The former world champion of the Buriki-One fighting league had felt he had been getting ignored by Tension management, rarely booked to fight on television, only doing undercard bouts on live events against nobodies that didn't even go on his record. He found himself left out of promotional material, including the opening of the show and posters,

As if to add insult to injury, not only had he had a horrible track record lately of 4 straight losses in a row, (two of those losses being back to back where he was KOed within seconds, but his losses to the young schoolgirl Natsu had led to her nicknaming him "the burger king" and it stuck, with fans constantly chanting it at him as he came out.

No, he was indeed not a happy camper, and as his theme played, and he stormed out to the ring, adjusting his gloves and shorts, he fully intended to make a punching bag out of whoever his opponent was, man or woman, and let loose his irritation and aggression on them until they were a sobbing wreck, tapping out beneath him!

*Having no prior knowledge of his current adversary, Cobra prepared himself for the unknown, running himself through the various scenarios that could unfurl throughout the evening. Gain, however, seemed to have other plans, his flashy intro catching the snake king off guard!*

"Hhmmm?" *Turning to face the source of the noise, Cobra was stunned at the figure standing before him; he had anticipated someone vastly larger to be making sure bold statements, which coaxed out a contained chuckle.*

"Sssseriously?" *His cadence emanated a snarky tone, wondering if this was some form of elaborate joke he was the butt of.* "If you're really eager for an asssss-kicking, I'm more than happy to oblige!"

Gai...had no idea who this strange blonde man with the apparent speech impediment was...but he was going to wreck him.


"You think you can handle me? Do you even know who I am? I'm the Buriki-One King! I've been fighting for years, some young upstart like you could never handle me! I'm the-"

Gai was cut off though, as several in the crowd began to chant their new favorite nickname for him, coined by one of his former opponents. "BUR-GER KING! BUR-GER KING!" they chanted, causing Gai, an incensed look on his face, to run to the ropes, pointing at the group near the front row responsible.

"YOU DO NOT MOCK THE BURG-FUCK! I MEANT, THE BURIKI-ONE FIGHTING LEAGUE KING, YOU WORTHLESS WRETCHES!"
_________________
Check out the recently revamped Roster Page, now with pics!

"Burger King?" *Trying to discern the origin of this odd moniker, Cobra shrugged it off before refocusing himself and signaling for the bell.* "Well, whatever- You talk quite an interesssssting game, but actions are the only thing that matter once the gauntlet hasssss been thrown down!"

*Shuffling from left to right in an effort to generate momentum, Cobra closed the distance between them before vaulting forward, twisting himself sideways to try and crack Gai across the base of his mandible with a lightning fast snap kick!*

Finally ignoring the crowd to focus on the match, Gai would turn as the bell rang, eager to face and defeat his opponent, only for said opponent to have other plans, as Gai turned around and walked right into a full on kick right to the jaw!

He cried out, stumbling back several steps, taken off guard by the sudden shot to his lower jaw!
_________________
Check out the recently revamped Roster Page, now with pics!

*After feeling the edge of his shin connect across Gai's unprotected dome, Cobra squandered no time in attempting to capitalize upon it by subsequently lunging forward and swinging his forearm towards him for a flying forearm smash towards the bridge of his nose!*

"Ssssso far, you haven't really impresssssed me~" *He remarked in a snide cadence before springing off the ropes, augmenting his natural speed and agility before taking flight, obtaining a terrifying amount of hangtime to accentuate his potentially debilitating blow!* 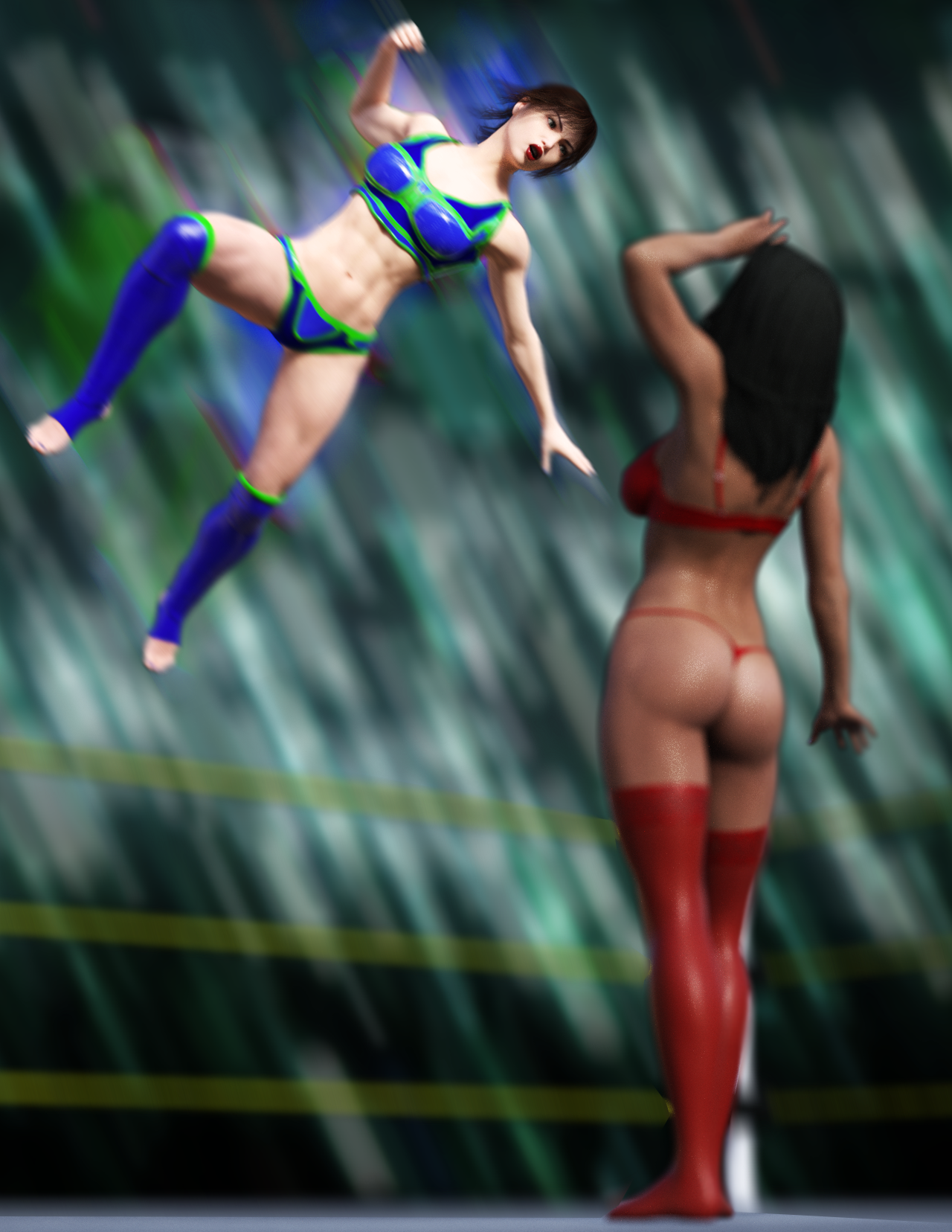 "GAH! Mother Fucker!" Gai screamed, as Cobra's forearm smashed right into Gai's nose, making him stagger back and waste time checking on his nose, making sure it wasn't broken.

This was a mistake, as it gave his strange, snake-obsessed opponent to bounce off of the ropes, and Gai turned to see Cobra in mid air, seconds before the other man crashed into the former Buriki One King, dropping him flat to the mat!
_________________
Check out the recently revamped Roster Page, now with pics!

*As Cobra continued to plummet, his extended fist smashing against Gai's vulnerable face with a sickening* "WHACK!" *That ultimately sent him collapsing into the ground, Cobra gradually recoiled after the impact and took a quiet, long look at the sprawled out competitor.*

"Hmhm...he'sssss honesssstly kinda cute when he issssn't running his mouth~" *Deciding to give the audience a little treat for being so welcoming towards him, Cobra ambled towards his downed opponent before stretching his legs apart, pressing his midsection upon Gai's sternum while simultaneously covering his mouth to smother him out!*

This was...very very very much not good for Gai.

This match had barely started, and he was getting smacked around without any issue whatsoever, and now the bastard was sitting on him and trying to smother him out!

"MMm! MMM!" Gai let out several muffled screams of anger, kicking his legs in protest, swinging his arms to try and punch Cobra off of him!
_________________
Check out the recently revamped Roster Page, now with pics!