» Amelia Kunisada (D) vs Jinx - The Ninja and the Feline
by Jaystar Today at 1:13 pm 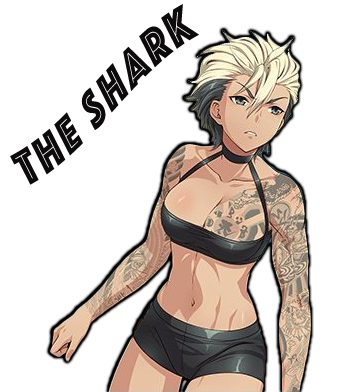 Endurance: ★★★★ – While she can overexert herself with her nonstop strategy, the opponent is usually KO’d by then.
Strength: ★★★ – While not a powerhouse, Mako is built for hard strikes, and can even throw larger opponents.
Speed: ★★★★ – Mako is built for speed, and most of the time she will use it to beat down her opponents in a frenzy.
Defense: ★★ – She is often more focused on attacking than defending. This leaves her open to counter attacks.
Technique: ★★★★ – Mako has trained for years, and thinks of herself as the best at what she does. And that might just be true.

Strikes: ★★★★ - Mako's strikes are her greatest weapons. Knowing quite a few that can crack some bones.
Submissions: ★★ - Mako isn't much of a submissionist. She would rather knock them out, than make tap them out.
Powerhouse: ★★★- Mako isn't that strong, but her decent strength does give her a boost.
Aerial: ★★ - While not a high flyer, she does use the ropes quite well.
Counters: ★★★ - Mako has some good counter strikes she learned in her Muay Thai training.

Weaknesses - She can be too focused on attacks to defend, has no submissions, and can misjudge opponents based on their appearances. She also likes to finish opponents off quickly and professionally, but if she's enjoying the fight she can get reckless in her decisions. Even giving the opponent moments to ready themselves.

Cage Breaker:
Mako ducks under a strike, and delivers a hard elbow into the side of her opponent's rib caged. This often can leave the opponent falling to their knees, and in the perfect position for a pedigree.

Fury of the Sea:

Suplexes:
Mako uses several variations of this move. Such as bridging for a pin afterwards, letting go of the opponent to send them flying, or even sending them into the corner. (She can also roll with these for multiple suplexes).

Jaw Breaker / Question Mark Kick:
Mako uses this kick as her opponent is dazed or just barely standing. Mostly this allows her to show off a good bit.

Death Stranding:
With her opponent beaten down on one knee, Mako charge forward and jump on the opponent's knee, and then land an axe kick straight down on her foe's head to leave them lifeless.

Regicide:
Renamed after defeating Daisuke for the title of KING. After a kick to the gut, she will trap the opponent between her legs, hook their arms, and slam their body face first into the ground.

Wrestling Attire: A black sports bra (Made more revealing than most) and black shorts (Also very short). She will wear black leg protectors, as well. 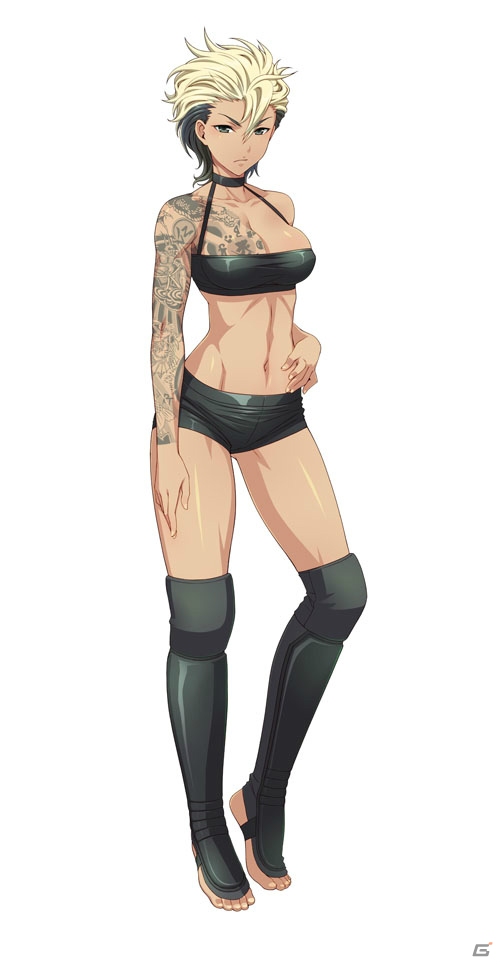 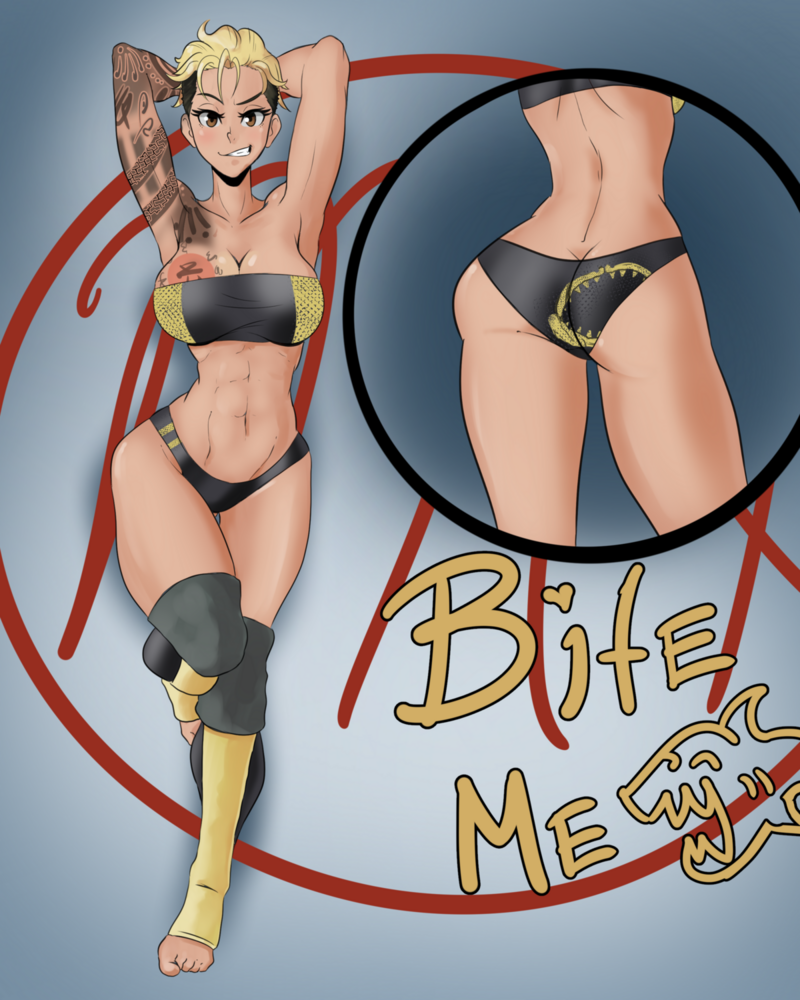 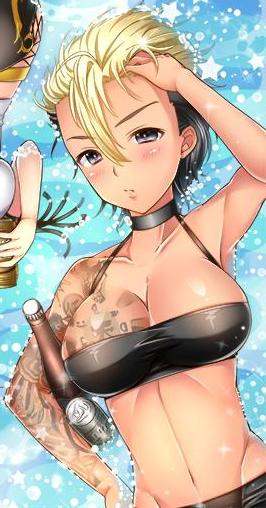 Visual Appearance: Mako was once called pretty by many people, so she made herself look tougher. Dyed part of her hair, got tattoos, she likes to be called hardcore now, instead. (Those people now call her hot, not to her face, though.) Her tattoos are all on her right arm, shoulder, and breast.

Physical Appearance: Mako is well built. She’s not big and tuff looking like she wanted to be, but she is fairly strong. Her normal height actually annoys her, as she’d rather be really tall and have more muscles. But because she’s not, Mako trains her speed a bit more than her brawn. This has lead to devastating results for her opponents.

Mako in a match with smaller opponent: 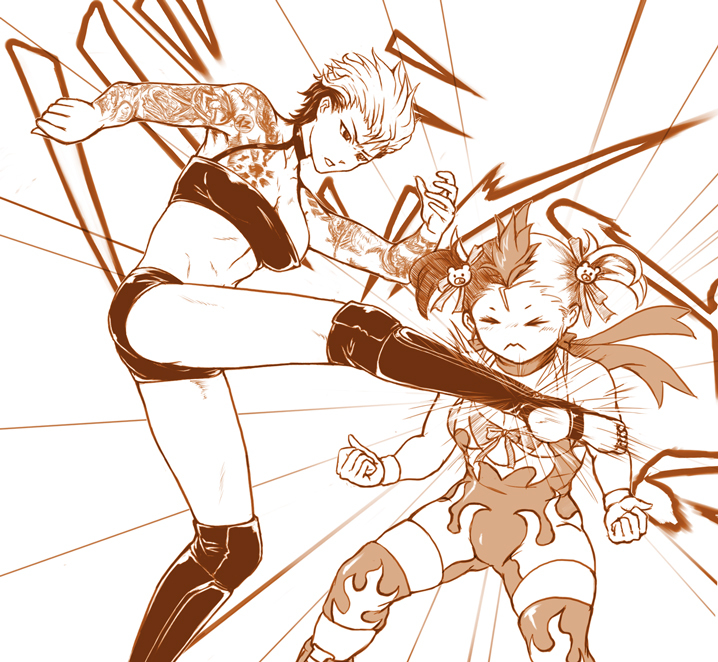 Personality: Normally Mako is a normal girl. She had friends in school, did homework, normal stuff. While in truth she has always been a hardcore fighter, even going as far as looking around to fight people. When she feels threatened or disrespected, she will call you out and tear you apart with her words. Then afterwards, probably her bare hands. Other than that, she’s arrogant. But only when it comes to fighting, she really doesn’t care about anything else. She has a habit of doing what those who beat her command. Just one thing, though. This is mostly because she wants to punish herself for losing. 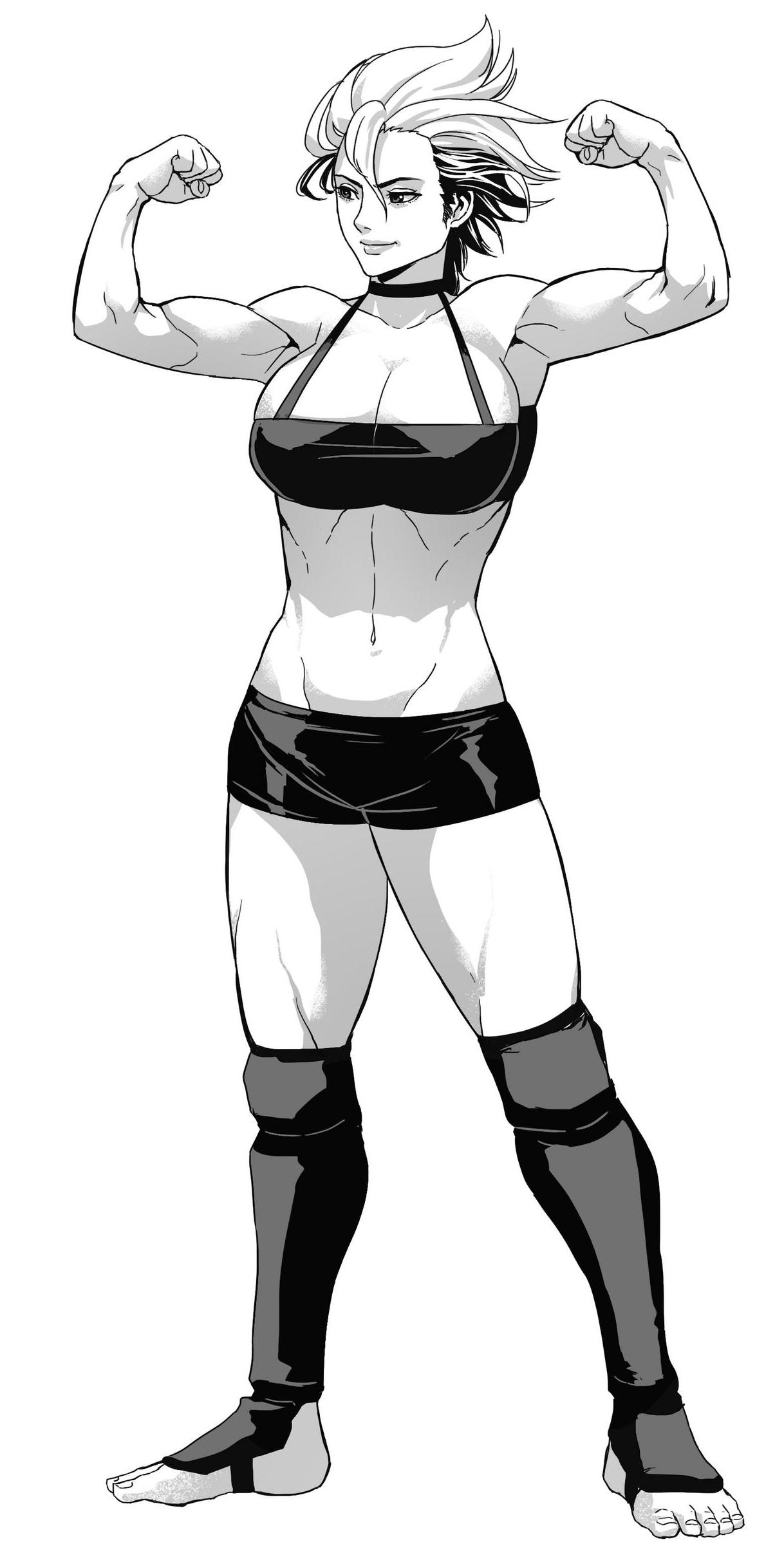 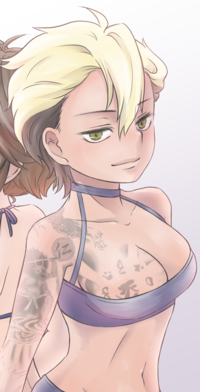 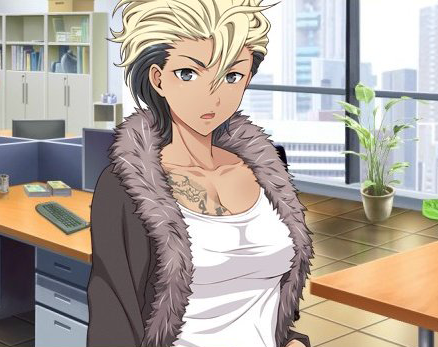 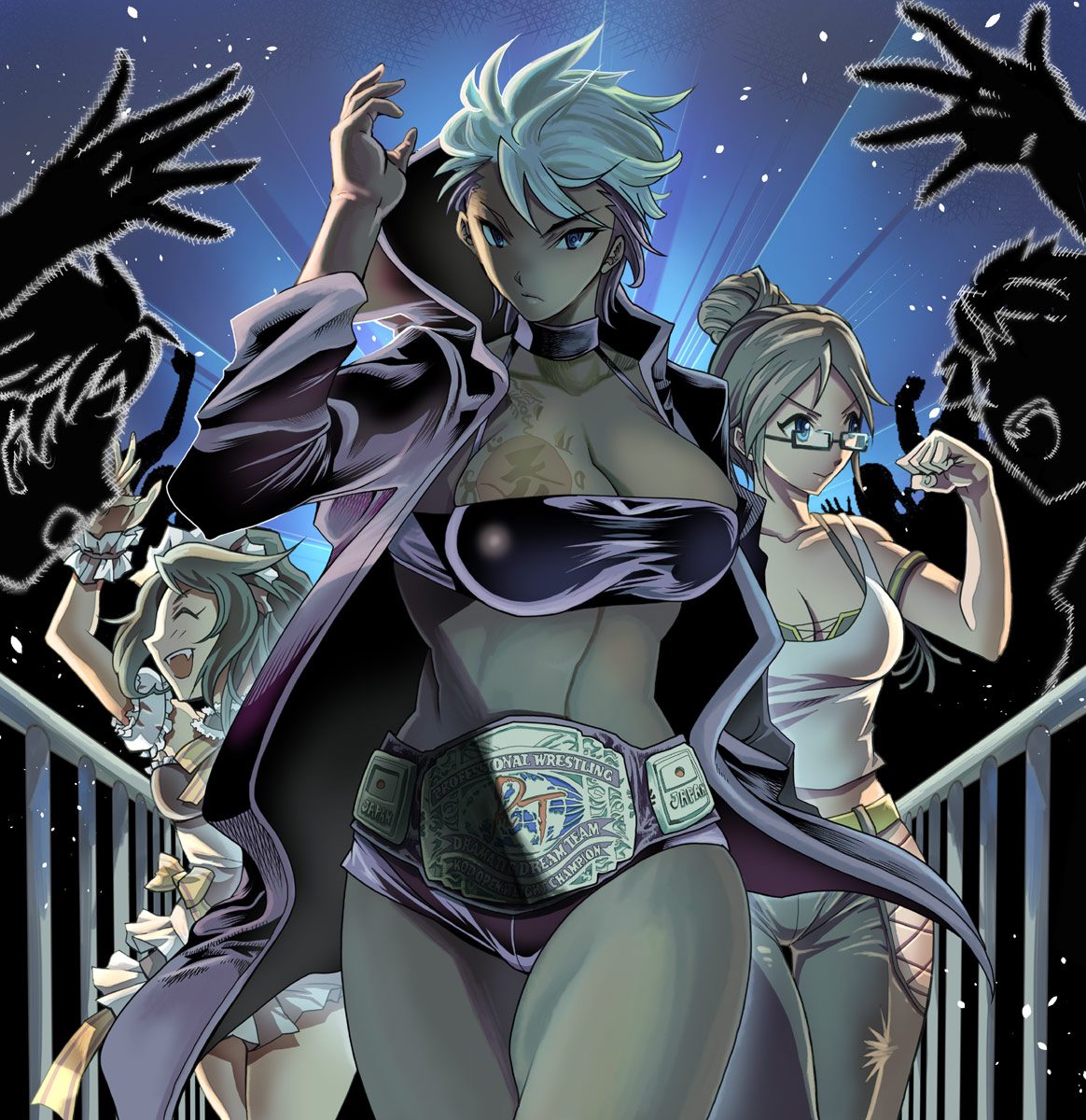 Mako is the daughter of a female yakuza boss, and the pit fighter who ran off after sleeping with her, which is where Mako’s story begins. Growing up as the daughter of yakuza, Mako was feared by others. Her mother, thinking it was her profession causing this, tried to explain why she was feared. But before she could, Mako surprised her with the fact that at the age of 11, she was often fighting with other kids on a regular basis.

In fact, the kids referred to her as ‘the shark’ since she would often hunt for opponents, and because they found out that “Mako” was a shark name (She liked the name a lot after finding that out). But while they feared her, she was pretty popular with the boys since she was pretty. This would lead her to challenge them to beat her, and if they won she’d date them. Three years passed and she had beaten every boy in her school, sometimes more than once.

But by her 14th birthday, she could no longer beat down the boys she was used to fighting with. She was still wining, but not as easily as she used to. The boys had grown stronger over the years, and Mako couldn’t keep up with them. She started hating her weaker figure, and wanted to change it.

But she just couldn’t seem to get enough muscles even after starting to train herself. Deciding she was stuck with this type of body, Mako decided to focus on her speed and learn techniques. This would lead her down a path to eventually join several dojos to learn martial arts. Each of which Mako was kicked out of for excessive violence in fights. They were all just too boring for her.

This continued until she learned of a Muay Thai class at a local gym. Here they were giving lessons to female students for self defense, but Mako went too far as she wanted to learn offense, instead. So she walked up to the toughest looking woman in the room, and kicked her in the gut. The woman she kicked, though, was a retired 6’3” fighter who returned with a knee to her face.

Out cold Mako was taken to a hospital with a concussion, leaving the fighter she kicked guilt ridden. Surprisingly, though, her mother laughed it off saying she had that coming over the years. She did ask for a favor, though. That favor being to teach Mako Muay Thai, and any other martial art she knew.

So for six years, Mako would use all her energy to train, lift, and throw everything she had at her new trainer in attempts of revenge. This woman was the only one who could handle Mako, and there were some close calls, but she always beat her. But in the end, at the age of twenty, Mako asked for a fight, got the fight, and after an hour of two very stubborn fighters beating each other to dust, she stood victorious. Until collapsing in exhaustion, and the two had to share a hospital room. Now needing a place to put these skills to the test, Mako joined the AFW to kick ass, and get a few tough girl’s numbers.

One day her dad returned to see her, and she knocked him out cold. They get along great, though…much to her mother’s horror that they are so similar. Both love fighting, both love drinking, and both seem have a love for strong woman. (Mako’s mother is 6’, and while she’s not built tough, she’s pretty damn intimidating.)

Due to being in a female gym for thousands of hours while training and fighting, she developed a love of tough/well built women.

Mako has never been on a date. Which she just recently realized and got pretty pissed off about it. Who would have though her challenge to the boys would have screwed her love life up?

Her favorite type of food is steak. But her favorite meal is anything at an Italian restaurant she found, which includes Pizza, Lasagna, and other Italian dishes sold there.

Due to her frenzy-like fighting style and movements in fights, Mako got the nickname “The Shark” early on.

Use to keep track of the boys she beat by carving marks into a tree, but she stopped after it became too difficult to count just how many there were.

Mako has learned most of what she knows from her trainer, who also taught her wrestling moves since she was considering joining AFW. Mako struggled with some move, but learned that she exceled with simple but devastating move like the pedigree. She also has a skill for springboard moves like the bulldog that she calls The Bull Shark.

1. Holly Matheson VS Sora Hyamoto
Mako raises hell before she even debuts

2. Mako "The Shark" Adachi VS Shido "The Fanboy" (Debut)
Mako has her first match and is ready to throw down!

3. Mako "The Shark" Adachi VS Suzumi Ishikawa "The Tsunami"
It's going to be one hell of a match for Mako in her first steel cage match against a former Wrestle Angel. But no cage can hold these two wrestlers! It's Shark VS Tsunami

4. Shark Attacked!?
While changing after a tough workout, Mako get's ambushed by Sora

5. The Prince becomes the king
After watching an upsetting promo, Mako decides to go for the crown herself

6. Mako "The Shark" Adachi VS Daisuke Takeuchi
After being left without a fight, Mako is ready to take on Daisuke to prove who the real "King" is!

8. Mako "The Shark" Adachi VS Dasher Inoba
Mako accepts an open challenge from her most infuriating opponent yet

9. Mako Adachi VS Ryo Kamiya
Mako gets freaky in the ring with Tension's lovable perv, Ryo Kamiya! The question is, who's the better pervert? Mako intends to find out...

10. Una Leccion del Maestro
Mako meets Carmen fucking Rodriguez outside her gym! And there's no way she's leaving there without a fight!

12. Challenge Accepted...Again!?
Mako wants another fight with Akane! This time in her home!

13. Mako Adachi VS Brunhilde
Mako faces off against a Valkyrie!

(?) Tension Elimination Chamber Match
Mako gets in the chamber with five other opponents. One of with is a man she'd love break in half! (His name rhymes with flasher) And the cherry on top, it's for a chance at the Tension World Title!!!

Side Timeline: (Topics in no real order but influence Main)

(?) Mako Adachi VS Alaina Sanders
The shark invades Friction for a second time to face an Amazon!

(?) Mako Adachi VS Dave Blake
Mako has her first table match, and she's ready for the challenge!

(?) Mako Adachi VS Susanna Kin
Mako has an interesting encounter that turns into a match with high stakes!

(?) WiP
Mako meets with some talented wrestlers to discuss the future

(?) Late Night with a Buzzed Shark
Mako meets a nice girl at the bar...take your bets on just how fast she'll start hitting on her.

Won the title of "King" from Daisuke Takeuchi


Friends: Akane Akiyama (This might be mostly one sided)
Allies: Carmen Rodriguez
Rivals: Daisuke Takeuchi, Akane Akiyama
Enemies: Dasher Inoba (Fuck this guy!)
Crushes: Any and every “Tough Girl” in the AFW