Search
Latest topics
» Double Tag Teams Debut! The Stacy Twins vs The Owens Family! The Sisters vs The Married Couple!
by Jstruggs716 Today at 5:13 am

Edward Sealgair let out a small sigh as he fidgeted in his chair backstage, wearing nothing but a pink speedo and his usual wrist tape, his friend and ally Ryo Kamiya sitting behind him, braiding his hair for him so it wouldn't get in the way during his match.

"So, you know anything about this Iyaya guy?" Ryo asked, twisting and tying the golden locks before him as Ed scratched his chin and looked in his notebook. He hadn't had much warning about this match, as it was only just recently announced, so he hadn't had time to look up any matches, just googling the fighters name.

"Apparently he's only had a match against that Jasper that you fought. Apparently he passed out in some headscissor hold."

"Oh, no way, the little brit took him out huh? That kid has more spunk than I gave him credit it."

Ed shrugged, closing his notebook. "Not much information about him. Apparently he's small, super cute, but also a dancer. So I'm guessing he's probably going to be pretty fast and hard to catch, and if he's a dancer, he's probably pretty limber and can kick hard I'm guessing."

"WHO ARE YOU CALLING SMALLER THAN A BUBBLE!?"

Ryo rolled his eyes, pushing Ed's "short" button accidentally, before continuing. "Look, I just meant your really fast too, so if your bigger than him and can match him in speed, you got this. If the little Welsh could beat him, it should be easy for you."

"She was a VIRGIN, and she FELL ASLEEP after coming! I didn't even fuck her, she rode me, and I was lucky enough to roll out of the way when she passed out after. Not exactly a dominant win."

Entering the ring, Ed hopped up onto the corner, laying across the top rope on both sides on his side, with his legs crossed, looking quite laid back as he awaited his opponents arrival!
_________________
Check out the recently revamped Roster Page, now with pics!

But soon, the sound of his theme kicking on snapped Iyaya back to reality. "Alright, fight time!" And with a quick last look, he was out onto the stage.

Iyaya was in his typical attire, his jacket and shorts with wraps around his thighs and feet. A typical fighter look by most accounts. And as he walked down the ramp noted getting a few whistles and cheers. Seemed his last match got him a few more fans, even if he lost he. He gave the crowd a wink and a smirk, the act giving him a slightly larger pop off as he made his way into the ring.

And as he hopped inside he got a good look at his opponent. A dude in just a speedo, a bit taller than him, and with a relaxed expression. "Hehe~" Interesting... would this be a cool-headed fighter, or was it just a mask to hide the nervousness. Testing the theory would be quite the entertainment. And to test the waters, as he walked over to his corner, Iyaya gave the guy a quick wink.
_________________
The Azure Squadron

Ryo had said he was cute but like...this guy was cuuuuute. Just the sight of him almost immediately made Edward blush, and the cute wink he gave certainly didn't help. 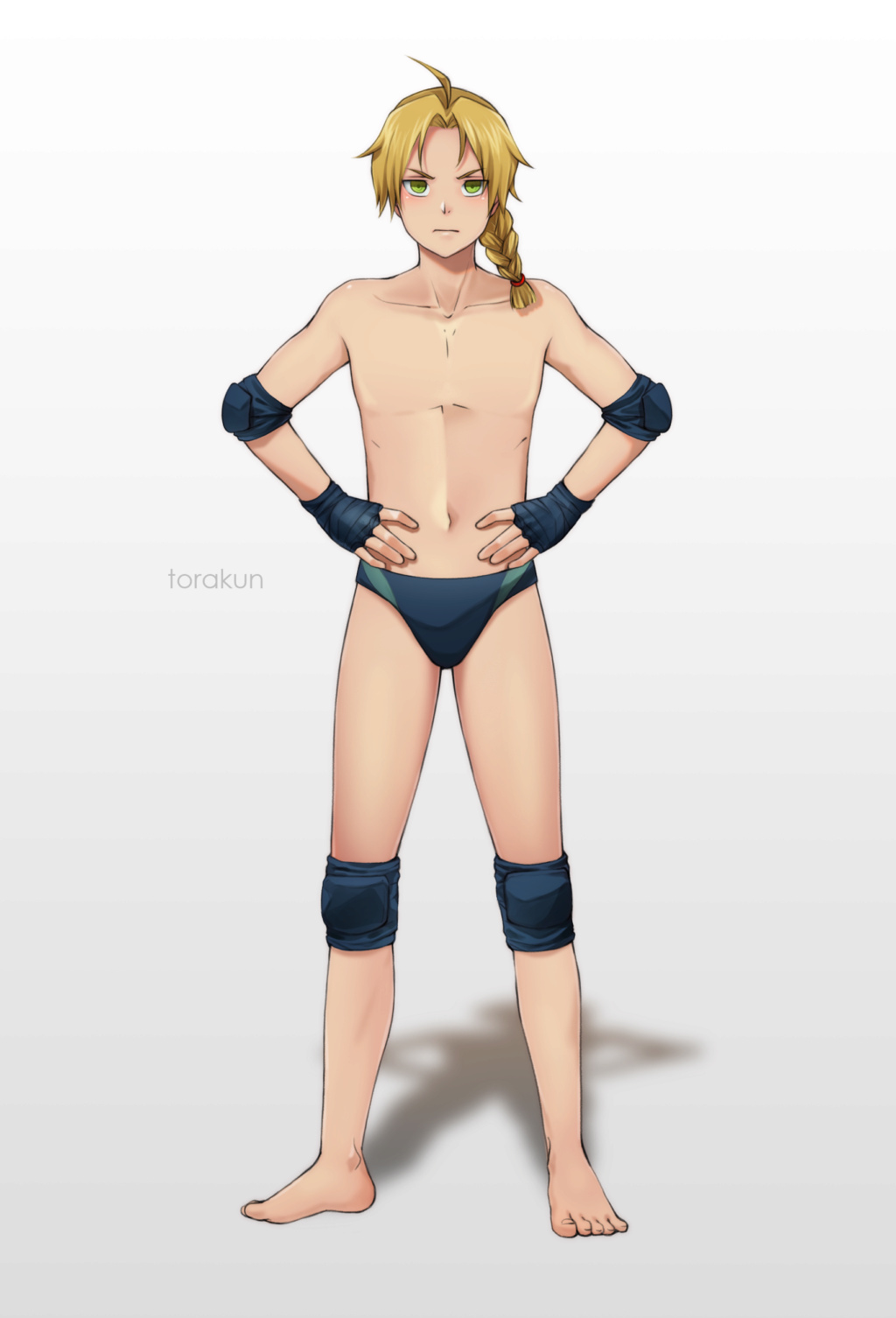 "Kekeke~" Oh, those dude was losing it. The match hadn't even started and this guy was already fluster from just a little wink. And the dude's mannerisms after was just adorable. From the way he walked, the way he talked and stammered, even the way he was trying to make this a more casual affair with small talk. Yeah, no doubt about it, someone up top wanted to see a toy get broken in, and Iyaya had little qualms about being the first one to do it. Hell, being someone's first was always a joy in some way. And with the guy's outfit just having the bare necessities for wrestling Iyaya make this one hell of a show for everyone. Jasper might be more his type, but this guy... this guy was going to be a fun warm-up before he settled the score with that damnable Brit. Iyaya could barely contain the impish glee in his toothy grin, looking over Ed like a shiny new toy.

Oh. Ok. So this kid definitely was not nervous. Just Ed. Wonderful.

Well, at least he was cute, Ed thought as he let out a sigh, before looking back at Iyaya with his bright emerald green eyes, taking a step forward in his tight speedo to look the cutie over. "Well, you're certainly excitable aren't you lad? I'll keep that in mind so I can win the first fall easy, but uh..." Edward tried, he really tried, to sound cool and tough...but he couldn't resist blushing as he spoke. "B-but I'll be taking you for a ride for the second round for sure."

He said, trying to maintain his composure in front of the small cutie.
_________________
Check out the recently revamped Roster Page, now with pics!

Iyaya's cheeky grin only widened. Fresh meat was placed right in front of him and already he was scheming of how to this guy writhe and squirm with pleasure and need. The blush on his face and the stammer in his voice was just begging to be turned into a mindless moans. And the speedo... oh god, the speedo was just the icing on the whole damn cake. The guy might be fresh meat, but he was fresh meat packed in one hell of a pretty bow. A bare body with just the barest of essentials covered and the most basic of protections given. The perfect outfit for a hentai match, and combined with his sheepish nature the little imp had a hard time hiding his excitement... in more ways than one.

"Look at you, talking big~" The imp teased, taking another step, the shorts and crotch the centimeters from Ed's. "Hope you can pick up what you put down, big guy." He gave a quick lick of his lips. "I like my rides, rough~"

And Iyaya wasted little time, pushing his crotch against Ed's speedo at the sound of the bell, at test to see his opponent's arousal as well unsettle himself while moving to the ropes.
_________________
The Azure Squadron

It was funny, Edward was pretty used to people staring at him in just a speedo...but the way Iyaya was looking at him, made him feel like covering up a bit...Ryo absolutely would love this guy, the two of them would just flirt with each other an entire match no doubt.

But then the bell rang and Iyaya bumped his crotch against Edward's, getting the blonde boy to blush and stumble back a bit before raising his arms, looking to grapple with the skinny dancer!
_________________
Check out the recently revamped Roster Page, now with pics!

It hard to hold back the giggles from Edward's reaction. A little crotch bump and the guy was blushing and staggering about like a shy schoolboy. The crowd couldn't hold back the laughs either. But it lasted only moments, as Edward quickly got his game face on and motioned for a grapple. And at first, Iyaya did the same, raising his arms in a grappling stance, as if to lock hands and do some proper wrestling.

But Iyaya wouldn't be much of an Imp if he did that.

No, he only took two steps forward before dropping his arms. "Psyche!" And he instead pushed forward, pivoting on his heels and shifted his lower body, his leg gliding along the canvas as his foot swiftly moved to nail Edward's ankle. The crotch bump aside, this was a fight first, and a sex show second. And Iyaya was dead set on giving this guy some pain to compliment the coming pleasure.
_________________
The Azure Squadron

Despite the blush on Edwards face, he had to admit, the ridiculous and over-confident boy in front of him was incredibly cute, and maybe, in time, he could find his bravado endearing, like he had with Ryo.

Still, first, he had to outwrestle him, especially after that crotch bump made him blush so much. So he went in closer, looking to lock up with the incredibly cute Iyaya...only to let out a yelp and fall too his butt as the imp suddenly kicked his legs out from under him with a leg sweep, dropping the speedo clad teen onto his rump!

"Kehehe~" Aaw, that actually sounded kinda' cute~! Knocking a bigger opponent flat on their ass always sent a rush through the imp's veins, and Ed's surprisingly innocent reaction had Iyaya's heart soaring with devilish intent. This guy could fall for feints, which was a lovely little fact to keep tucked away. Alright then... Iyaya's brought a finger to his lip in an innocent gesture. An act that contrasted his playful and devious expression as his eyes gazed Ed as if he was food.

"Okay, big guy~" He said, a teasing smirk on his lips. "Here's some love taps!" He swung his leg forward, aiming a sharp roundhouse for the guy's shoulder and side. It was tempting to go for the head, but best to tenderize meat before eating it.