» [Falls Count Anywhere Match] Charlotte Ravel' vs Rebecca Owens - No Time To Back Down
by Valicon Today at 1:19 am

» How shall you lose? Kanda Kaya vs Shad Owens.
by Valicon Today at 1:05 am

Lifting Sharks Out Of The Water (for Caboose)

Lifting Sharks Out Of The Water (for Caboose)

In her time in AFW, Yelena had spent more time in the gym than anywhere else, outright demanding that the crew add heavier weights to the racks and benches. Even if the Russian wasn't going for her records, she still needed more than most other wrestlers to keep up her strength. At least with the AFW system no-one had anything against her working out in what was essentially her underwear. 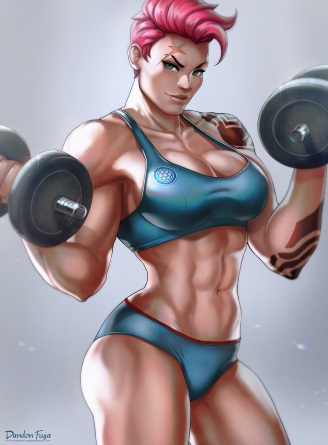 During her time at AFW, Mako had accomplished a lot in her mind. Soon she'd even be in the upcoming chamber match to win a shot at the title. However, there was a prize right in front of her that she was dying to get her hands on. Yelena Turova. One of the strongest women in the world, and one of Mako's favorite body builders. The shark had a huge thing for strong women, so it was no surprise that she was drawn to Yelena. The woman was tank...no...she was a goddess, and Mako wanted nothing more than to worship this goddess like she deserved to be worshiped.

So with the woman doing some bench presses ten feet from her, the shark was dying to leave the punching bag and walk over to the pink haired juggernaut. The fact that Yelena was so scarcely dressed only made her want to meet the woman sooner, but she wanted to keep cool and come up with a plan first.

However, after a few more minutes of staring and still no plan, Mako made her move. She'd walk right over to Yelena after taking a deep breathe. Then, the shark would give this her best shot.

"Hey you need someone to spot you? Honestly, you look so strong that I doubt you'd need my help. But safety first, right? So I figured I'd ask." Mako would say while admiring Yelena up close. Her blue sports bra and bottoms were tightly fitting, just like the shark's attire which consisted of a black bandeau sports bra and shorts, but all she wanted to do was rip them off! Holding back, though, Mako would stay calm and wait to hear Yelena's response.
_________________
Caboose's Friends List

"Five... hrm?" Yelena grunted as she tilted her head to look at the person who was calling her, arms fully outstretched as she held the weights perilously above. Sliding the bar back on the hook the Russian perched herself up by the elbows to get a better look at the tattooed blonde offering their support to her "Done with your routine?" the powerlifter asked casually before dropping back into position on the bench and wrapping her fingers around the loaded bar. "Why not, some company might be nice."
_________________
Adrian Kytes (Heel) Outspoken All-Rounder
Rebecca Tomko (Tweener/Heel) Amazon Enforcer
Sabine Shanoa (Face/Tweener) Dancing Succubi
Tina Armstrong (Face) Blue-Eyed Superstar
Yelena Turova (Face) Crushing Powerhouse
Pantha (Face) Pride of the Jungle
Anna Silver (Face) Ardent Angel
The Green Empire The Empress & Imperial Guard.
Mara Jingfei (Face) Amethyst Dancer

"Phase one complete" Mako thought to herself despite having no plan whatsoever. Acting as if she had one calmed her nerves sometimes, though. So after Yelena accepted her offer, the shark would walk over to the other side of the bench and watch to make sure the bar wouldn't be too much for the woman at some point.

"Cool, and yeah I'm pretty much done. Usually I do some light lifting then for the rest of the time beat the hell out of a sand bag." she explained while watching the woman go back to work with her bench presses.

"You look pretty damn strong. How much are you lifting?" Mako asked wondering what Yelena was capable of. "Heh...honestly I bet you could probably bench press anything if you put your mind to it." the shark added to make a joke based on very real possibilities. Sure there were lots of things that she couldn't lift, cars and boats for example. But Yelena still looked like she could pull off some crazy feats of strength.
_________________
Caboose's Friends List

Mako just nodded her head as Yelena spoke. She wasn't completely sure how to convert kilos to pounds that well, but the shark understood what the woman was saying. Yelena wanted to train herself to go longer instead of just big displays of strength. Mako could see how that'd be helpful for the woman.

"Nice. Maybe we can try running together or something." the shark would offer the Russian. "You're somewhat new here, right? Have you gotten used to the place? I'm just asking cause between the ambushes, crazy fans, and perverts on the roster...fitting in can be rough." Mako explained not so much from experience but from other things she'd heard. The shark had got accustomed to this place pretty easily, after all. It was like she was made for this setting. It also didn't hurt that she might just be the biggest pervert on the roster.

Yelena was used to tuning out the rest of the world on the bench, now with Mako talking to her, weights that would normally been no problem were starting to take a toll on the pink haired powerhouse as she tried to split her attention between the bar and the conversation. "No-one ambushed me. Perhaps it is only cowards who flee from actual challenge," she grunted out, trying to re-settle into a rhythm of lifts and drops "Still... it is not easy. My English is not best, Japanese is worse. I do the work, seems okay for now." she reflected, "...Are you keeping track of lifts or was I?"
_________________
Adrian Kytes (Heel) Outspoken All-Rounder
Rebecca Tomko (Tweener/Heel) Amazon Enforcer
Sabine Shanoa (Face/Tweener) Dancing Succubi
Tina Armstrong (Face) Blue-Eyed Superstar
Yelena Turova (Face) Crushing Powerhouse
Pantha (Face) Pride of the Jungle
Anna Silver (Face) Ardent Angel
The Green Empire The Empress & Imperial Guard.
Mara Jingfei (Face) Amethyst Dancer

Mako listened as the pinkette spoke about not being ambushed. Honestly, it made sense considering she was such a tank physically. If Mako wasn't so turned on by powerful, muscular women, she wouldn't have messed with Yelena either. She was turned on, though, and just looking at her muscles go to work was intoxicating. At the same time, though, that meant she had no clue how many lifts Yelena had done.

"...Ah fuck...I'm sorry. I wasn't keeping track..." Mako explained as she scratched the back of her head. "It makes sense that no one would want to screw with you, though. You look like a bigger...stronger...female Ivan Drago." the shark explained with a chuckle. "Plus your english isn't that bad, and I could help you out with the Japanese."
_________________
Caboose's Friends List

Yelena raised an eyebrow at the Shark's choice of words, "It's strange. You hear about this place and there is nothing but screwing with people." she chuckled, sliding the bar over it's hook as she looked up on the blonde. "Grab the 10 kilo plates, move up to one hundred for serious lifts. Two Twenty pounds in American, I think." She explained, pointing towards the weight rack.
_________________
Adrian Kytes (Heel) Outspoken All-Rounder
Rebecca Tomko (Tweener/Heel) Amazon Enforcer
Sabine Shanoa (Face/Tweener) Dancing Succubi
Tina Armstrong (Face) Blue-Eyed Superstar
Yelena Turova (Face) Crushing Powerhouse
Pantha (Face) Pride of the Jungle
Anna Silver (Face) Ardent Angel
The Green Empire The Empress & Imperial Guard.
Mara Jingfei (Face) Amethyst Dancer

"...That's not what I meant...but you're not exactly wrong either..." Mako would say in response to the Russian. "And while I didn't start all the screwing around here...I'm pretty guilty of continuing the tradition." the shark explained before walking over, grabbing the weights, and putting them both on the bar for Yelena.