Style Strategy:
Sabine enjoys playing with her opponents, rubbing up against them in such a way that were she not in a match she would have been hit with 5 charges of sexual harrasment and 1 charge of rape within the first 6 minutes. Using her flexable body to perform beautiful dance moves that can take an opponent off thier feet, she'll then move in for her submissions, tying them up with her legs, exploring them with her arms, even crushing them with her ass if she's in the mood.

-Surra de Bunda With the opponent in the corner facing the ring, Sabine charges from the opposite side, jumping mid-air and spinning around to slam her ass into her opponent's face. If she doesn't feel like jumping so high, she'll just do this to a seated opponent.

-hell's butterflly From behind a seated opponent, Sabine hooks thier arms with her legs and crosses them behind thier head in a sort of full nelson, leaving her arms free to force an increase in pressure by stretching out or to play with her opponent's arms (rope or duct tape would help this). She can also from this position roll herself and her opponent upside down for a unique pin

-Hurricane Combo A series of kicks starting with a spinning handstand kick, a high roundhouse as she moves out of the handstand position and finsished with a low sweep

-Four step scissor Sabine wraps her legs around a standing opponent in a figure four position then leans back and squeezes.

- Fancy footwork Sabine twists her victim's right arm with one hand leaving her free to deliver various kicks to the head with her right foot finishing with one where she kicks over the arm, and spins back smashing her heel into her opponent's temple

-Hell's gate Sabine utilises a painful BJJ choke, trapping thier arm  and thier head between her legs like so: https://www.youtube.com/watch?v=vk9W4zyW7FI&feature=related

-Milk and honey (for girls) Sabine scoops up her opponent while kneeling down, playing with thier breasts wiht her hands which also supports them up while she eats them out. She won't stop this even if her opponent comes, not being satisfied until it completley drains thier resistance to anything she does.

-Succubi's trap (for guys/girls with double sided dildos in them) Sabine forces them to kneel in front of her while she lowers herself onto them, wrapping her legs around their waist tightly and begins to fuck them outright before hooking their head under one of her arms for a guillotine choke while still fucking them, leaving them completely drained when they come. Most people she used this on were molested by her in the night and wake up just as drained as they were before, leaving them unable to resist whatever fun Sabine had planned for the morning. seen here. 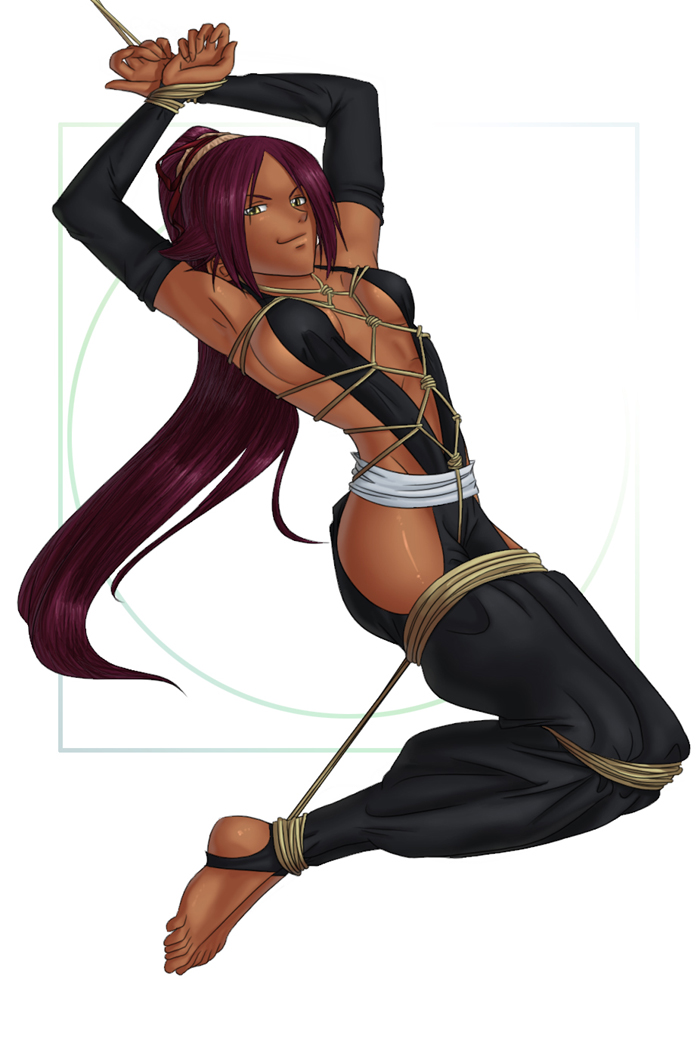 Her normal attire plus an extra bit of bondage for fun 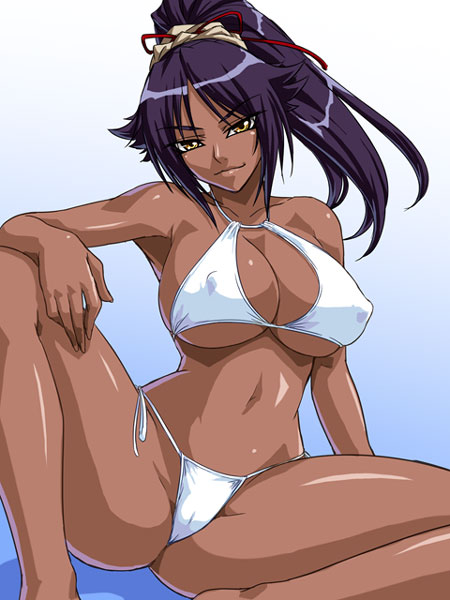 Ready for the beach

Sabine is an exhibitionist, loving to show off her natural assests for everyone who'll look, and herself if no-one else will (idiots don't know what they're missing). Outside of that though, she's normally very playful, enjoying various psyichal activities, and freaking people out with how open she is about her sex life, if a position seems impossible, she's probably done it several times and enjoyed it alot. She doesn't care if she wins or loses matches so long as she gets to have some fun with whoever she faces, allthough there's few joys that compare to making someone submit to pure pleasure.

The illigitamte daughter of an American buisnessman and a brazilian dancer he'd had a relationship of sorts, Lisa Slan was exposed to a mixed upbringing to put it lightly, raised soley by the dancer until her existance was revealed to her father, who quickly enrolled her into a school back in the states for a while to save his own reputation before she left with her mother after a nasty fight between her parents, she experienced both the slums of Rio, and the privalige of a middle class sub-urban life. This disonance made her try extra hard to make friends wherever she went, whether it be her looks, her parents or her skills that caused a group of both sexes to form around her, who she spent a lot more time with than her parents.

When she was in her late teens and moved back to Rio before graduating highschool she lost her viginity to one of her classmates, although how good he was was always up for debate the sensation she felt made her crave for more as she started using her looks to find suitable people to satisfy her, acting like a hunter on the prowl at times. Her skill at Samba combined with this got her the nickname "The Dancing Succubi" someone who could lure anyone in to satisfy and leave them completley drained of energy, no matter what the gender. It was never rape though, she made sure to always stick within her own age group and always made sure that they really did want her like this before starting her fun.

As she got older and a present from her father allowed her into a college she began to experiment a bit more, with more deviant styles of love making, bondage, playing the role of dom, and even hentai wrestling for foreplay. No matter how many clubs she joined up to try and take her mind off sex, even going to such lengths as asking to be trained in Capoeria by one of the origional masters to help focus her body in other ways couldn't stop her lustful nature. Still it wasn't all bad as it allowed her to pick up a few less than wholesome jobs on the side for a quick payday in between allowance payments. It was surprising how much people paid to have her grapple some other girl in her underwear when she was getting the most enjoyment out of it.


Facts of :
-Capoiera was illegal in brazil when she was taught, but not in japan. She never used it in her amateur hentai wrestling videos but has no qualms about using it in AFW
-14:00 to 16:00 is her "naked time" in which she does everything naked if possible, only throwing on a few clothes if she has to go out in public so she doesn't get arressted for public nudity.
-Can't decide between using baby oil or grapeseed oil to lube herself up, grapeseed is slipperier for that extra bit of fun but baby oil comes in so many delicious scents
-If stuck in bondage or a submission hold she's more likely to purr in pleasure than scream in pain and will often give tips if they're doing it wrong.

Likes:
-Sex
-Being naked
-Dancing around


Most Used Quotes:
"Ooooh, this looks like fun."
"I haven't even started to play"
"You'll enjoy it, I promise."