Irene in a combination of work and casual attire: 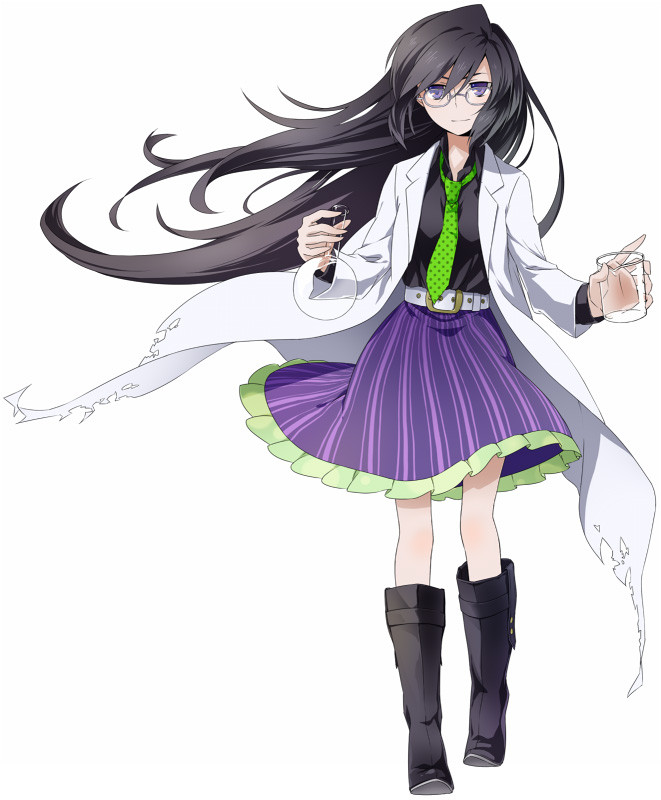 A photograph of Irene, taken in her university's laboratory: 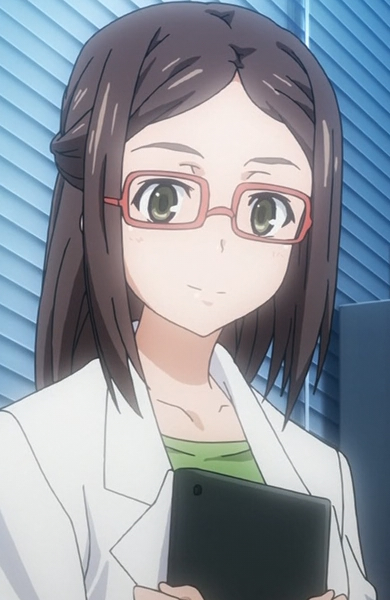 
Fighting Style: Irene is a bright student who likes to analyze problems and challenges carefully before she tackles them. The young girl brings this methodical nature into her matches, taking her time with her opponents and initially evading and playing defense to analyze her opponent's weaknesses. When she think she has found her opponent's weakest body part, she will go on the attack and work it relentlessly with brutal submissions until her opponents breaks, though hopefully not literally.

Finishing Moves: Chemical Spike – Unbeknownst to her opponents, Irene will often smuggle a little test tube filled with a chemical mixture of her choosing into each of her matches. In the ring, she will wait until her opponent is vulnerable and, at the right time, introduce the toxin to her opponent's system to cause illness, often by dipping her finger in the compound and then inserting her finger into one of her opponent's orifices. The compounds, which she often synthesizes herself before each match, vary in nature according to the match type. For standard matches, it is often prudent to use a chemical depressant, such as rohypnol or ketamine, to cause sleepiness, dizziness, and eventually unconsciousness in her unfortunate opponent. To intoxicate the opponent, Irene will trap her victim in a hold that leaves the face exposed, and then force her finger into the opponent's mouth; a salty or bitter taste is a sure sign that Irene has slipped something fishy into your system. For hentai matches, Irene can mix together an inert substance with enough acid mixed in to give the chemical a tingling sensation when it comes into contact with someone's skin. Then, while she has her opponent under her control, she will dip her finger into the noxious substance and rub it over her opponent's womanhood to stimulate her vulva, or even finger her with it to get the substance deep inside her.

Naturally, this “finishing move” is dirty as hell even by AFW standards, but Irene does not consider herself a heel for using it. As far as she's concerned, if she worked her ass off to learn chemistry, she's earned the right to use it against her opponents. However, a savvy opponent can easily turn this finisher on Irene herself if they happen to get a hold of the test tube she carries into the match, and knows how to spike her with the chemical inside it.

Physical Appearance: For all her confidence, Irene is tiny for her age, standing at a miniscule 5 feet, 2 inches, and being quite thin. Her black hair is fairly long since she routinely forgets to have it trimmed, and heel wrestlers can exploit her long locks for some dirty hair pulling if they see fit.

Wrestling Attire: Irene isn't much of a fashionista, and will usually prioritize the comfort and practicality of whatever she wears into the ring. Typically, she goes in with one of her sports bras, a pair of loose-fitting shorts, and a pair of boots that reach up to her upper calf muscles, laced up to protect her sensitive feet from any harm or teasing her opponent might want to inflict on them.

Personality: A smart, worldly girl who enjoys her studies and is surprisingly outgoing for a student of her caliber. Irene has learned through years of collaborative university-level projects how to work with others, and she is often eager to offer objective advice or assistance to people who ask for it. However, Irene has faced discrimination in the past on the basis of her gender, by professors or fellow students seeking to manipulate her into sleeping with them. This treatment has left her edgy, and when she senses defiance or opposition from others, she becomes cold and distrustful toward them.

In the ring, Irene is a friendly and disarming person by default, but this behavior belies the fact that she will do whatever it takes to win a match, and does not practice what most people would consider “honorable” behavior. In Irene's mind, it is fair and reasonable for people to use any means at their disposal to their advantage, and she will use dirty tactics and expect dirty tactics to be used against her.

Past/History: Irene was born in the city of Boston, Massachusetts on October 12, 1988. Her mother was local to the region, while her father had moved out of his home country of Denmark when the company he worked for requested his transfer to their U.S. offices. From an early age, Irene showed a strong desire to understand the unknown, exploring any place she was left alone in and picking up and toying with strange objects that she found lying around. This behavior caused problems with her parents, who more than once caught her attempting to eat disgusting materials or interact with rats and other vermin that she found around the apartment complex that the three of them lived in. To sate her curiosities, Irene's parents enrolled her in elementary school early and urged the school to place her in their honors program. Irene seemed to enjoy the challenge, and throughout her K-12 life she maintained high grades and won various awards for her scholastic achievements, even winning a scholarship to the prestigious Massachusetts Institute of Technology.

Irene was well versed in a variety of topics, but she had a particular aptitude for chemistry, able to intuitively understand organic reactions that would have taken most students some time with their pen and paper to puzzle out successfully. When Irene moved on to MIT after graduating from high school, she chose a chemistry major and worked tirelessly toward it. The school was famous for its chemistry program but infamous for its rigorous standards, and Irene's studies ate up most of her free time, leaving her without the freedom to enjoy herself, indulge her senses, or explore her sexuality, the things most people were able to do during their college years.

After 5 years of study, Irene earned her bachelor's degree. She wasn't satisfied, however, and didn't want to stop her education there. The girl wanted the best job she could find, one that would put her at the frontier of discovery in her field. To get a job like that, she would need a Ph.D, and she wanted to have some international experience under her belt as well, just like her father who had originated a continent away from her current home. She decided to apply to the University of Tokyo for her graduate program, and moved away when she was accepted.

Unfortunately, despite her prior academic record, Irene wasn't granted a scholarship to pay for her graduate program. This was a problem, because with her extensive higher education came some extensive tuition bills, and taking a loan would leave her with some pretty heavy debts to pay off. Irene needed money to fund her education, and although she could certainly get work from any chemical manufacturer with her credentials, the thought of more boring office work frustrated her. The young student's life was still lacking in any passion, save for the passion she held for chemistry. Irene wanted to indulge her senses somehow, while still getting the payment she needed to complete her education. In Japan, there was a way to do both at once; join the AFW league and use your body and the body of your opponents for the entertainment of the masses. Irene was privy to the sort of behavior that the AFW condoned; for better or worse, there was never a shortage of excitement for the women working there. It was a haven for eccentrics, convicted criminals, and warriors of all types, and the ones who managed to rise to the top of their game got payed handsomely for their work. Irene wanted a piece of the action, and she was willing to fight for it. Today, Irene leads a busy life, alternating her work at school with her work at the gym, doing both at once if possible while awaiting her time in the wrestling ring eagerly.

Current Goals: Irene is in the AFW to enjoy herself and make money doing it. She aspires to the dominant women of the industry who earn fame and fortune in their roles, but at a minimum, Irene simply wants to win enough bouts and earn enough respect to keep her newly earned place in the league. Whether she will make friends or enemies in this pursuit remains to be seen.