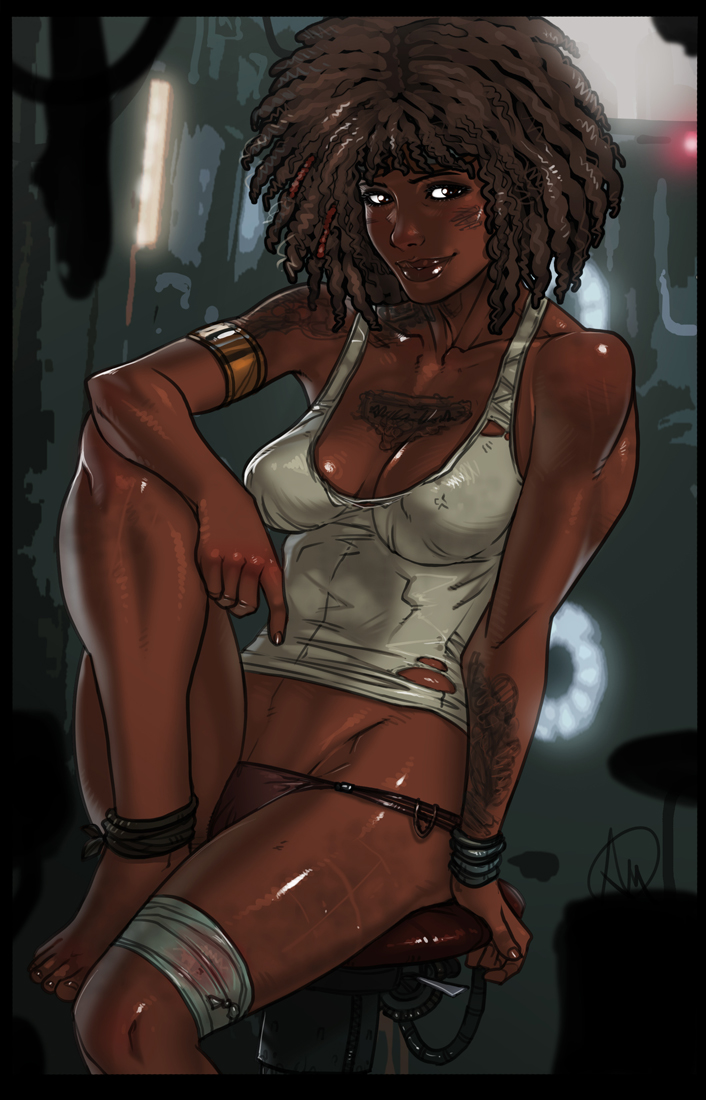 Endurance: ★★★★★ – Faheema has spent a lifetime surviving through hostile conditions that would kill most people. She is not the biggest or the strongest woman in Friction, but she is one of the toughest, capable of fighting through almost anything.
Strength: ★★★★ – About as strong and imposing as a woman of her build can get.
Speed: ★★★ – Strong leg muscles can propel Faheema up to a reasonable speed, but her agility is hardly impressive.
Defense: ★★★★ – Fast reflexes and a high tolerance for pain make attacking her a dangerous prospect.
Technique: ★★ – Her lack of formal training is her most significant weakness as a fighter. All of her fighting experience was gained on the street, and her style is strictly improvisational.


Wrestling Strategy: Faheema is a brawler that aims to overwhelm opponents with heavy, debilitating strikes chained together in rapid succession. Has a talent for using her whole body in the offensive, alternating punches, kicks, and headbutts to keep people from easily predicting her movements. Pragmatic and ruthless by nature, she will target vulnerable body parts to incapacitate foes more quickly. This does not necessarily mean that she will cheat, as there are many weak spots on the body that match rules don't protect.

In going for the kill, Faheema has two favorite strategies. Her most common tactic involves the ruthless targeting of her opponent's head with strikes and slams, to knock them out or daze them long enough to score a pin. If that doesn't work, she knows a few holds that make good use of her strength, and is known to threaten foes with snapped limbs and mangled joints if they don't surrender to her.


Personal Style: Fighting and sex are the only means that Faheema has to entertain herself, so she brings a casual attitude to both. In the ring, she usually maintains a boisterous and friendly demeanor that sharply contrasts her vicious, no-nonsense fighting style.

For sexual contests, Faheema is something of a glass cannon. She's a rough lover for as long as she stays on top, but when the roles are reversed, she is quick to become aroused and prone to losing her strength. Her appetite for sexual pleasure is ferocious, and if other women are able to start feeding that appetite, she is reticent to resist them.

She also takes part in handicap matches, allowing weaker women to team up against her. The challenge of it is addicting to her, and she strives to hone her abilities against multiple opponents.

Breath Stealer – Faheema delivers a quick punch or chop to her opponent's throat, disorienting them and disrupting their ability to breathe.

Parry and Riposte – First, Faheema will deflect an oncoming punch by brushing it aside with a quick motion of her left arm. She then follows up by delivering a hefty punch or kick to her opponent's exposed side. Alternatively, Faheema can catch an opponent's punch and keep a hold on the attacking arm, then fire a series of punches into her opponent's body while she is unable to defend effectively.

Strappado – Named for the torture technique of old, Faheema applies a lotus lock on an opponent lying face down. With her own weight holding them in place, she will compress their arms together with her legs while using her arms to further twist and abuse the trapped limbs. Faheema is strong enough to dislocate joints with this hold, and if her opponents don't scream their surrender quickly enough, she won't hesitate to. 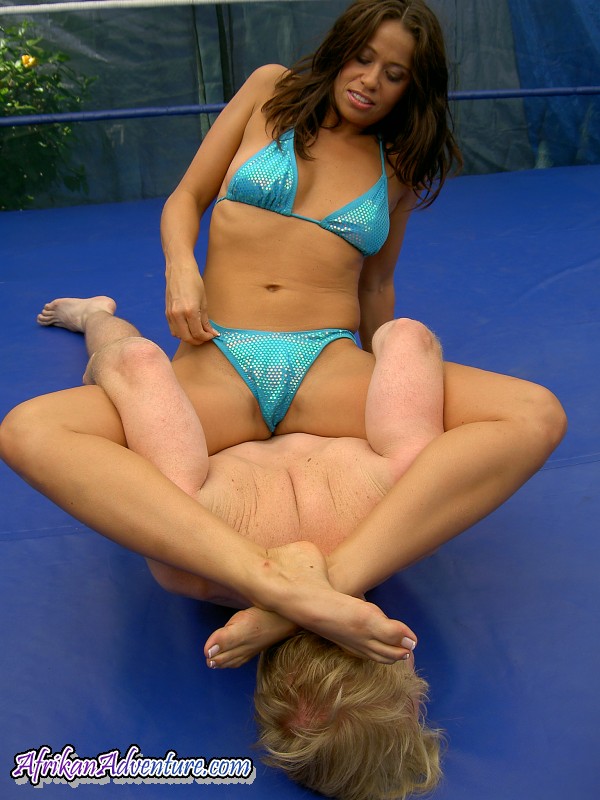 Personality: Faheema is crude, antisocial, and often paranoid about the intentions of others, which makes approaching her pretty difficult. Look past that, however, and you will find a lot of fear and anxiety hidden underneath the bravado. As a refugee from a very maligned part of the world, living in a country where she really stands out, Faheema doesn't feel welcome or safe in her new home. She doesn't have permanent citizenship status in Japan, and could be thrown out of the country if she ever lost her employment in Friction. Her aggression towards others stems from just how dangerous her life is. Other people are potential enemies, but the few that manage to befriend her will find that she is remarkably soft and sensitive when her guard isn't up.


History: Faheema was born and raised in eastern Sudan, in a remote village near the Nile river. The community was largely self-sustaining, with a pastoral lifestyle built around farming and cattle herding. In place of a real education, Faheema's formative years were spent learning how to contribute to this lifestyle. She learned how to grow food and tend to the needs of the village's cattle herd. Soon, she was deemed mature enough to make trips to and from the nile, fetching water when her village needed it. It was grueling labor, especially in the tropical heat, and it ensured that Faheema would grow strong from an early age.

Even though Faheema lived in a peaceful village, Sudan itself was an accursed place, a nation defined by half a century of ceaseless warfare. For as long as it had been independent, Sudan had been mired in a civil war between its northern and southern halves, and no matter how many peace agreements were reached, tension between ethnic groups in the region ensured that the violence never truly ended. As Faheema grew older, she became more aware of just how hopeless life in her homeland truly was, and she started to dream of running away. Her parents shared her fears, and did their best to teach her how to survive in the world beyond their small home.

By the time Faheema had reached adulthood, the conflict had started to change, spiraling from a mere war into something worse. Rumors began to reach Faheema's village of a region in the west that had been transformed into a living hell. Villages were being destroyed, the citizens rendered homeless if they were able to escape at all. The Sudanese government was attacking its own people, targeting certain ethnic groups, including Faheema's. Most rebel groups that opposed the government were of a certain ethnic alignment, so it was believed that the military was now trying to wipe these groups out – all of them.

Faheema wasn't going to wait for her own government to murder her, so she finally told her parents of her desire to flee the country. Both of them loved her dearly, and although they didn't want her to leave, they knew what would happen to her if the military decided to pay their village a visit. Instead of trying to stop her, her parents offered to help. Her dad had a friend, a former soldier who had defected and was now working as a smuggler. He could be convinced to help, but it would take time.

Two years passed as Faheema and her family prepared themselves for her departure. In that time, the violence formerly confined to the country's west had spread, and on a warm summer night, Faheema's family got word that a neighboring village had been raided. They couldn't wait any longer. After a tearful goodbye, Faheema boarded a riverboat that would take her as far north as the Nile could carry her. After that, she would be on her own.

The arduous journey north is where Faheema picked up most of her combat experience. After crossing Sudan's northern border into Egypt, she found that the country wasn't much more hospitable than the one she had just left. No mass murder was a nice start, but there was no place in Egypt for an uninvited exile like her. People could tell by looking at her that she wasn't a local, and since she was in the country illegally, that meant hostility followed her everywhere she went. Accosted by local police, other criminals, and random men on the street who didn't like the look of her, Faheema found it increasingly necessary to fight in order to stay alive. Over time, she adapted to her new lifestyle, and embraced it. Her size and strength gave her a natural edge over others, but her true advantage lied in her desperation. Any fight that she lost could very well be her last, and that reality kept her fighting through any pain her opponents dished out. She practiced combat wherever she could, and proved to be a fast learner.

Since Egypt couldn't offer her a stable life, Faheema decided to keep traveling north, often on foot since most transportation was off limits to her. Stealing and fighting her way across the country was not a fast method of travel, and it would take her six months to finally reach the Mediterranean coast. The city of Alexandria became her home for the rest of the year, where she would work to save money and look for other refugees trying to make the illegal voyage across the sea to the Italian coast. This was the city where Faheema first learned of the existence of official wrestling promotions. Being able to fight for entertainment purposes appealed to her, and she made a mental note to seek employment in such a place if she ever got the opportunity.

When Faheema tried to enter Italy, the rickety boat she was on got stopped by the Italian coast guard. She was denied entrance into the country, but the authorities did allow her to apply for asylum elsewhere. Japan was currently under pressure to accept more refugees, and a wrestling promotion that Faheema liked was headquartered there, so her request to work in Japan as a wrestler was granted.

– Due to her people's historical relationship with ancient Egypt and colonial Britain, Faheema harbors a mostly theatrical grudge against Friction's Egyptian and English wrestlers, and will try to provoke conflict with them if she ever meets any in person.

– Faheema struggles with chronic pain caused by the amount of abuse her body has taken. Giving her a massage, or some pain medicine, is a good way to make her feel indebted to you.

– Although Faheema is a surprisingly eloquent speaker, she is also illiterate, having grown up with no access to a normal education. This gap in her knowledge was not a problem in her isolated homeland, whose culture emphasized oration over the written word. In modern Japan, however, her inability to read is a debilitating and deeply shameful secret that she keeps from others.

– Thanks to the ecosystem of ambush predators that Faheema grew up with, she has a keen sense of awareness and is difficult to take by surprise.

– Doesn't know if her parents are still alive, and even though being separated from them hurts, she has no intention of ever going back. She almost died in Africa too many times to ever consider returning to that cursed continent.

Dislikes:
– Wealthy snobs. Not helped by the fact that every other Friction wrestler seems to be one.
– Nationalism
– Government employees