Search
Latest topics
» Its Wabbit Season! (For Lederface)
by Deus001 Today at 6:22 pm

» Crossing the Wire: Nidia Roja vs Barbed Wire
by Harrier Today at 12:48 pm

A Return and a Debut! Nightingale vs. Ushiwaka

Re: A Return and a Debut! Nightingale vs. Ushiwaka

Well, it seems like Roy is finally coming out of his shell. Nic lets out a wolf-whistle as the man flexed for the crowd, his grin growing even more bright at the sight. "There ya go! You got great assets, show 'em off!" he calls out, practically drowned out by the crowd's cheers. But, just because Ushiwaka is starting to get interesting and raise to Nic's own level of ... well, showing off, doesn't mean that Nic's going to go easy on him. Something he proves with the monkey flip, using Roy's own momentum against him and tossing him to the ground easily.

He hops up to his feet quickly, going straight from his prone position to a stand in one fluid motion, before he whips around to look at Roy. Sure enough, the other man is already moving to sit up -- something that Nic has something to say about. Well, not exactly say. With that, he rushes forward, aiming to slam him in the head with a shining wizard, and knock him back down. If that move lands perfectly, he'll follow it up with a pin, just to see how much he'd knocked off of Roy's invisible health bar, so to speak.
_________________

Re: A Return and a Debut! Nightingale vs. Ushiwaka

Roy is taken by surprise by Nics quick follow up to his toss. He turns around and his face collides right with Nics shining wizard knee and sends him straight onto his back. Roy moans in pain as he lays on his back while his face stings powerfully and he feels dazed. Nic smartly takes the chance to go for a pin on him to start a countdown.

At first Roy is too hurt to resist and the referees hand makes the first slap for the count. Roy knows that if he doesnt get himself together right now then Nic could easily win the match. But he wasnt done fighting. This was his debut match and he had more to show from a first impression. He had to fight through his pain and break the pin count. Roy manages to kick out just before the second pin count. He rests on his side panting at a good pace.

Roy then makes a split second decision to push his luck and try to attack rather than to retreat and rest up. While both him and Nic are still on the ground he rolls back to face Nic and throws himself at him. Regardless of whether he ends up at his front or back Roys plan is to grab him around the chest and lock him into a tight bearhug to try and drain his opponent of stamina.
_________________
My Wrestlers
Roy Ushiwaka - Tension
Akio Shonata - Tension 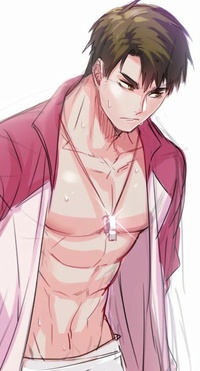