» A Belly Détente
by Mystery Dragon Today at 1:41 am

Making her debut on AFW, Raynare made sure she had everything on her sexy figure. She wants show the new top bitch in town is, wanting all eyes on her tonight as she’ll be damn sure to get her message across. 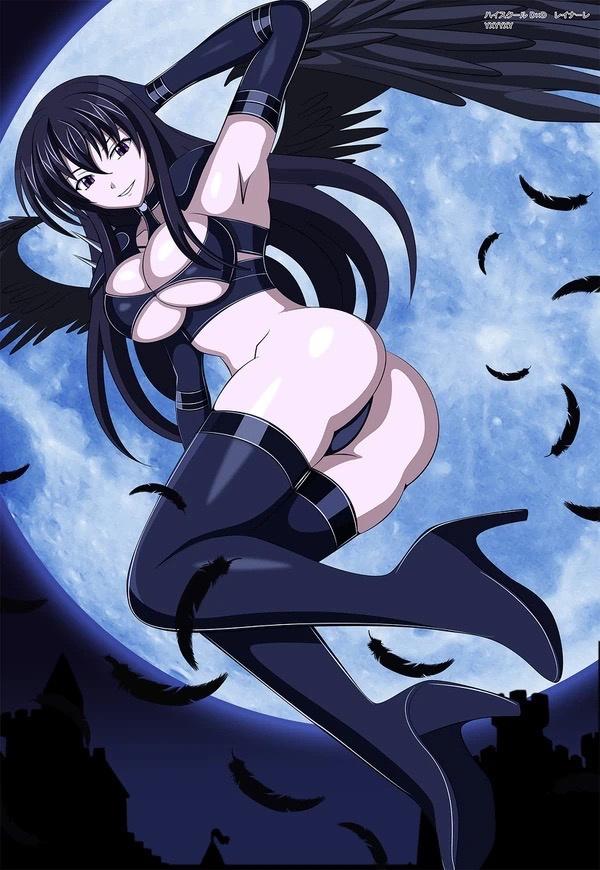 She enters the ring and strikes another pose, covering her crotch as she leans back on her other hand. She’d then take off her wings and toss them ringside for the crew to pick up, before going to the female referee. She corners against the turnbuckles, closing in for a kiss despite the official saying no. An inch away, she blocks it with her own finger, teasing the arena and the ref, blue balling them of some immediate lesbian action. Raynare then rests at one of the turnbuckles relaxingly, awaiting her opponent.

Her own music began to play and she nervously walked out to the ring. She was a lot less confident then Raynare and it showed. She just got into.the ring and tried to make herself seem quite unthreatening as she studied the opposing side more carefully.
_________________
Valicon's Roster

Raynare steps to the center with a hand on her hip. She raises her hand for a Test of Strength, but would plan to smack Rarera across the face disrespectfully. She’d taunt her afterward by gesturing to come at her, then kick her hard enough in the gut to make her hunch over. She’d then plant a foot on her head, wanting to establish some dominance from the beginning.

Rareta of course fell for the oldest trick in the books as she was abused right from the word go. Each time she tried to get up she was met with a new torment from the other woman and was treated like a punching bag...or an abused toy. Still she was not beaten. That kick thst was aimed at her connected, send her away and into the corner, after a moment to regain her breath, Rareta would climb the ropes and launch a dropkick right at her tormentor.
_________________
Valicon's Roster

Raynare gets out of the way and lets her opponent flop onto the ground from the Dropkick. With them face down, she’d step on the back of Rareta’s thighs and trap them with her legs. She then pulls back on her arms and rolls backwards, hanging Rareta in the air with a humiliating Romero Special.

“Start of the match and you’re already embarrassing yourself like this? How amusing.~” The succubus berates her as she holds the submission, making sure to keep her opponent on display.

Rareta tried not to sob or show any kind of weakness as she was put into this hold. It was a good hold for showing off your opponent and for a nervous girl like Rareta, it was pure torture to be shown off like this. She held on only because she did not want to end this match so early. Still the pain and the humiliation were mounting as Rareta tried to break free.
_________________
Valicon's Roster

Raynare holds onto her a little longer before releasing, letting Rarera flop face-down to the side. She stands up and begins playing with her opponent’s ass cheeks with her boots, laughing to herself as she watches them jiggle. The sadist then drops to her knees as she lifts St. Helen to all fours, grinding crotch against her butt. She then begins thrusting into her, making explicit noises to make her opponent get aroused.

"No, no... I don't like it, please stop." Rareta could just not get any traction in this match, Raynare just had her completely out powered and out lewded. This latest humping session was particularly embarrassing, leading to many in the audience to laugh and jeer at the young pinkette. She was blushing from cheek to cheek as she fought not to cry and give up right there and then.
_________________
Valicon's Roster

After a few more thrusts, the black-haired woman teases St. Helen’s inner thighs with her fingers and trace them towards her crotch. Raynare forcefully shoves Rarera’s face into the mat as she begins rubbing her groin, trying to get her nice and wet for some more action.

For Rareta, this was not a match, this was now a struggle to survive. Her opponent showed no interest in mercy or quarter, so it was up to her to figure something out, and soon if that finger was any indication. She would suddenly drop and go flat, at the same time snapping her legs shut in the hopes of trapping that hand underneath and between legs.
_________________
Valicon's Roster