Match Type: Ironman/woman match
Rules: The wrestler with the victories earned by pinfall, submission or KO at the end of thirty minutes would be declared as the winner of the match. The loser must admit the winner is the better wrestler along with kissing the winner's ass.

This was going to be it. After the twitter drama and the meeting of the two back in the AFW Gym, the prince and the goddess had finally decided to put their money where their mouth is and by the end of this match one of them would have to put their mouth on the winner's ass! There was at stake in this match and Daisuke was going to bring his best. He did not believe in the ability of Natalie and that AFW was no place for a Goddess but a kingdom ruled by the prince.

This was going to be a test for endurance and luck would have nothing to do with it. It was a ironman match for this very reason to determine that the superiority was not based on a fluke one victory win but a test of wrestling ability and endurance over a course of thirty minutes. Back in the locker room, Daisuke had just taken a shower and changed into his wrestling gear which consisted of a pair of grey CK wrestling briefs and black shiny boots.

"Tonight the whole world will witness the Prince triumph over a Goddess" he said with a snarky tone as he put on a black robe as part of his entrance. Daisuke would head on over to the gorilla position, waiting for his theme to cue before heading onto the arena. Daisuke had a smug grin on his face, he made his way down the ramp towards the ring before stepping up the steel steps and making his way into the ring. The male wrestler would remove his robe, handing it over to the referee who would in turn hand it over to the stage hand.

The prince would stand in the middle of the ring, hands on his hips to display his chiseled body while his eyes were fixed on the entrance ramp as he waited the Goddess to make her entrance and eventually they begin their grudge match.
_________________
Tension:

Tonight was the night. After a twitter spat and a met up at the gym where the match condition and stipulation was agreed upon. Natalie was finally going to get her hands on the man that dared tries to keep her subject, that man was the so-called prince of wrestling, Daisuke Takeuchi in thirty minutes ironman/woman match where the loser has to not only that the winner is better than them but also kiss the winner's ass as well. And the Golden Goddess was more than glad to both humbled by beating him and make him admits that she is better and humiliated by making him kiss her ass!

Natalie wore her usual golden attire as she stands alone in her locker room. She does a few stretches before walking out of her locker room and into the hallways before making her way to the gorilla position where she waits for her cue. And she would hear it as the ring announcers calls out her name and her entrance song: Goddess by Cepheid (Feat Nanon) plays throughout the speakers around the arena. "Finally....I can put this prince bitch in his place." Natalie proudly proclaimed before walking out from the behind the curtain onto the entrance ramp where she had a good pop from her faithful subjects. 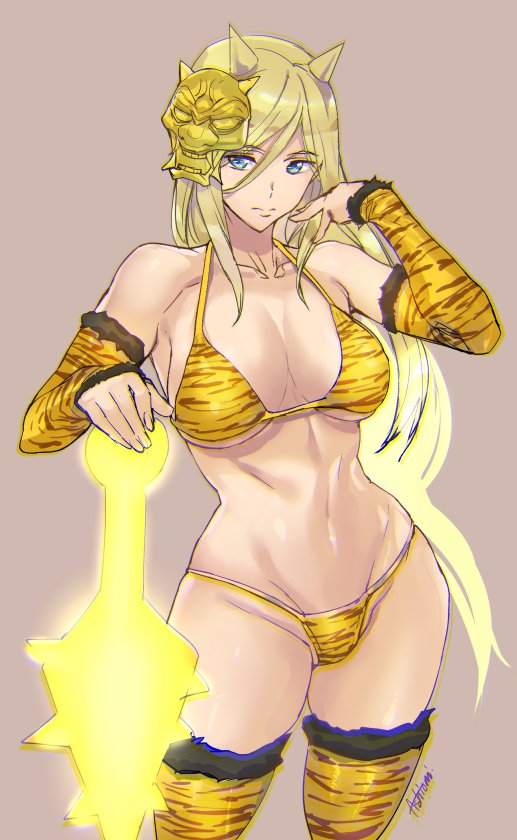 She stares into the ring where the cocky little shit was, a bit of anger grows inside of her as a scowl forms on her face. She walks down the ramp and towards the ring when staring daggers into the man before arriving at the ringside arena. Climbing up the steel steps she stands on the ring apron and she motions the ref to open the ropes for her which the female ref does as she sat down on the ropes and also lifting it up a bit, creating a small hole for Natalie.

Natalie enters the ring through the small hole, then walks to the middle of the ring where Daisuke was and stares him down for a bit before saying "Ready to kiss my gorgeous ass, little bitch?"
_________________
Double T

While waiting in the ring, Daisuke would mimic looking at his imaginary watch while tapping his boot on the mat to signal to the crowd and his opponent that she was taking too much of his precious time. He would yawn and stretch his arms when her entrance theme cued and the Golden Goddess made her way down to the ring. She got a much better reception than Daisuke did which did irk him but it was to be expected.

Clearly, Natalie was not in any mood to play any games and that was all too evident from the look that she gave to the wrestling prince while making her way down to the ring. Once again, Daisuke growled and clenched his fist in anger when the referee would walk over towards the ring ropes and bend the ropes open to allow Nat to make her way in the ring to get special treatment. Things were about to get more serious when the Goddess walked up to the prince, right in the middle of the ring, stared him down and talked smack.

"Tsk such a vile thought from a supposed 'Goddess'. I will expose you for the fraud that you are, Goddess" Daisuke snarled back as the two stood face to face. The referee would have to intervene, forcing the two apart before instructing them to back up to their corners. Daisuke would back up and the referee would check if everything was in order before ringing the bell to start off the match!

The prince would move out of the corner, walking towards Nat with his arms out in front as it was clear he was looking to clinch up against her.
_________________
Tension: