Jessica hopped up and down as she flexed her fingers a few more times. She was going to be introduced to the AFW’s sister show Tension. Or was it brother considering that it was where mixed matches were allowed. Whatever the case, the Olympian turned model was supposedly going to get an introduction from a what appeared to be a big name in this league. Some man by the name of Ryo Kamiya. Aside from the name, Jessica knew little about her opponent, though that was her own fault considering she hadn’t actually watched any tension shows before arriving.

Whoever he was though, Jessica didn’t intend to go easy on him. This was her chance to make a big splash tonight so she was determined to do so! Soon enough, she heard a tell tale knock come from her locker room door. Knowing what that meant, the Olympian took one last look at her outfit. A simple attire consisting of a white sports bra with black trim, black tight gym shorts, and wrestling boots. Leaving the locker room, the Olympian made her way to the gorilla position. Her music blaring as she moved past the curtain and into the arena! 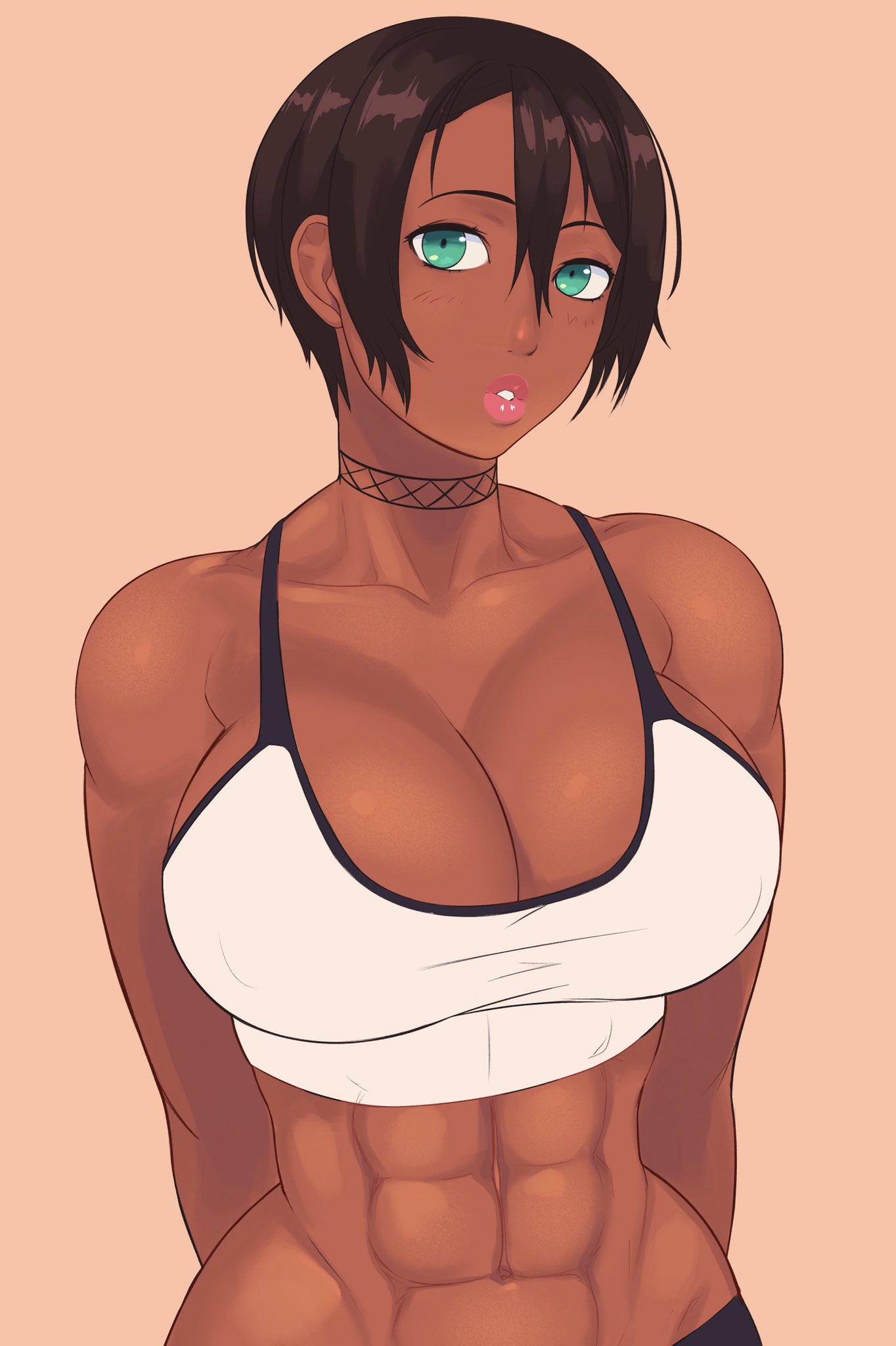 Smiling at the cheers. Jessica couldn’t help herself from posing slightly and flexing her arm before eventually walking down the ramp. Making her way to the ring, the Olympian would slide underneath the bottom rope and pop to her feet! Giving off one final pose, Jessica would then lean against the corner and wait for her opponent to arrive.
_________________
RINGROPES RINGROSTER
https://www.afwrpg.com/t20768-ringropes-ringroster#552569

She wouldn't have to wait long, as her opponents theme began to play, signaling the arrival of one of Tensions most infamous and popular stars, the teenage heart-throb himself, the Speedo Prince of Tension, Ryo Kamiya.

Despite his casual attitude, Ryo was smart enough to realize that this match was...going to be very tricky. Debut match or not, Jessica had damn near a foot and a lot of weight over him, so trying to take this big babe off of her feet was going to be very difficult...but all "giants" had to fall one way or another, and if there was a way to topple this one, he'd find it!

Sliding under the ropes, he entered the ring, posing one last time for his fans before looking at the taller, older, and more muscled fighter, grin on his face despite Jessica's obvious physical advantages.

"Well hello hello! Aren't you a pretty thing! Allow me, Ryo Kamiya, to give you a proper Tension welcome!" he said, gesturing like he was tipping his cap towards her, if he wore one, before starting to do some final stretching.

Jessica didn’t have to wait long. For only a few seconds after her entrance died down, another unfamiliar song rang out. And out came her opponent, who even from a distance the Olympian could tell was a small guy. A fact that only became more apparent as the boy made his way to the ring and slid inside.

The next thing she noticed was his choice for attire. The guy looked more like a belonged on the swim team than a wrestling league. And even that was a stretch, the swimmers she had known didn’t have Speedo’s nearly as tight as the boy before her. So tight that it hardly left anything to the imagination about just what that bulge was.

Feeling a blush already starting to come on, Jessica would force herself to look away and focus on Ryo’s face. Jessica gave him a nod back at his greeting before doing some last minute stretches herself. “Thanks for the welcome! Just don’t expect me to go easy on you ok!” she replied before the bell finally rang out and she made her way to the center of the ring.
_________________
RINGROPES RINGROSTER
https://www.afwrpg.com/t20768-ringropes-ringroster#552569

"No need to go easy babe, cause I'm going to get hard for you!"

As soon as the bell rang, Ryo met Jessica in the center of the ring, noticing the blush on her cute face. "What's wrong there Jessica? See something you like?" He asked, giving his hips a slow gyration, looking to distract her, so he could reach out and brazenly grope her breasts!"
_________________
Check out the recently revamped Roster Page, now with pics!

Points for boldness Jessica guessed as she heard Ryo’s response. The speedo clad male seemingly more than happy to show off how little he was wearing to the Olympian. Jessica struggled to push down the blush growing on her face at that. Which was only made worse when her opponent noticed it and gave his hips a little swivel.

“I’m just trying to figure out if you’re a wrestler or a swim-iyahhhh!!” the Olympian would begin to respond, when she suddenly let out a shocked gasp as her chest was grabbed and groped. Ryo’s fingers squeezing on her breasts in such a way that told the Olympian that her opponent had far too much experience in this sort of thing. “Wh-what the h-hell!!”
_________________
RINGROPES RINGROSTER
https://www.afwrpg.com/t20768-ringropes-ringroster#552569

Ryo couldn't help but laugh. This is why he liked fighting new people in AFW, it was always just SO easy to start messing with them!

Jessica didn’t know if it was out of shock or curious wonder. But for the first few moments she did nothing but watch with bugging eyes as Ryo groped and played with her breasts. Her blush brightening to even greater degrees as she saw her chest mold with the speedo clad boy’s fingers.

She snapped back to reality when a moan suddenly and unintentionally coo’d out of her lips when Ryo’s fingers pinched one of her covered nipples. Springing into action, the Olympians arms would shoot up and pry Ryo’s grubby hands away from her chest and force them up above his head.

This was all too easy. He had only just began groping her tits and she was already cooing for him! Finally though, she'd grab his hands and hold them away, leaving Ryo to grin sheepishly at her as she questioned his strategy and motives.

"Babe, I'm literally fighting you in nothing but a speedo, do you really think I'm the type to be subtle and not just go for what I want?" He asked, stumbling back as she shoved him away. Before he could get back to fighting her though, the much taller woman kicked him hard right in the chest, causing the speedo prince of Tension to gasp and fall back to the mat, groaning and trying to roll over to push himself back up!
_________________
Check out the recently revamped Roster Page, now with pics!

Jessica deigned to give Ryo a response as she lifted up her foot and sent it crashing into the smaller boy’s chest. The force of the being nearly enough to send ryona flying across the ring! But Jessica didn’t pay that any mind and instead to the moment to take a calming breath. The feeling of the speedo clad males fingers on her breast felt like they were still there.

She couldn’t take too long however, already she could see Ryo rolling onto his hands and knees. Eyes narrowing, the Olympian would March right on over to him and proceed to sit on the small of his back! Before her opponent could even get a word in, the Olympian would have hooked his arms over her thighs and grabbed hold of his chin. Yanking him back in a camel clutch!
_________________
RINGROPES RINGROSTER
https://www.afwrpg.com/t20768-ringropes-ringroster#552569

That sucked. It was hardly the first time the speedo clad Ryo had taken a hit from someone bigger than him, but damn, it really never got easier no matter how many times it seemed to happen.

Unfortunately, Ryo would have no chance to reflect upon this or devise any kind of counter strategy, as he would almost immediately be set upon by Jessica, the larger woman dropping herself onto the small of Ryo's back, getting a cry from him as she flattened him onto the mat, though that cry was nothing to the noise he then made as she pulled his body up and locked him in a tight camel clutch hold!