» To Wrangle a Reaper: Maria Castillo vs Liz Page
by Lilybell Yesterday at 8:11 pm

Rebecca Stretched out backstage, Limbering up for another match, another chance for her to show her warrior's mettle. This match was another case of why she needed to get to the match request board before Shad did. She preferred a good old- fashioned scrap, while he preferred the match be a touch more...intimate. Not that she didn't like it (in truth she loved these types of fights) just as a rule she never admitted it. So here she was in a outfit that probably wouldn't stay on, getting ready for a fight that may not actually be a fight. She still took it seriously though, a match was a match and she would not shirk from...

The Sound of the Frankish war song broke Rebecca out of her inner thoughts and rushed her towards the entrance. She exploded onto the staged, marching and giving her war cry to the beat of the song. Then she began to march, like a soldier, down to the ring where she climbed the steps and entered the ring, giving the crowd in all directions her warrior's salute before settling in to one of the far corners to await her opponent.
_________________
Valicon's Roster

Oh man, it had been way too long since Lauren had last been in an AFW wrestling ring. Her last match had been a lost against the Amazon, Alaina Sanders, a woman Lauren had last heard had become world champion, so at least she didn't lose to a scrub.

Still, that loss was quite a while ago, and it seemed AFW officials weren't all too impressed with her performance, given since then she'd only wrestled in dark matches before the show, or working indie shows across Japan.

So after her opponents entrance, she came out to the ramp when her music played, donning her usual green and black one piece and taped limbs, getting a very...mild reception from the crowd, no doubt because nobody really remembered who the girl was. She'd have to change that with her win tonight! 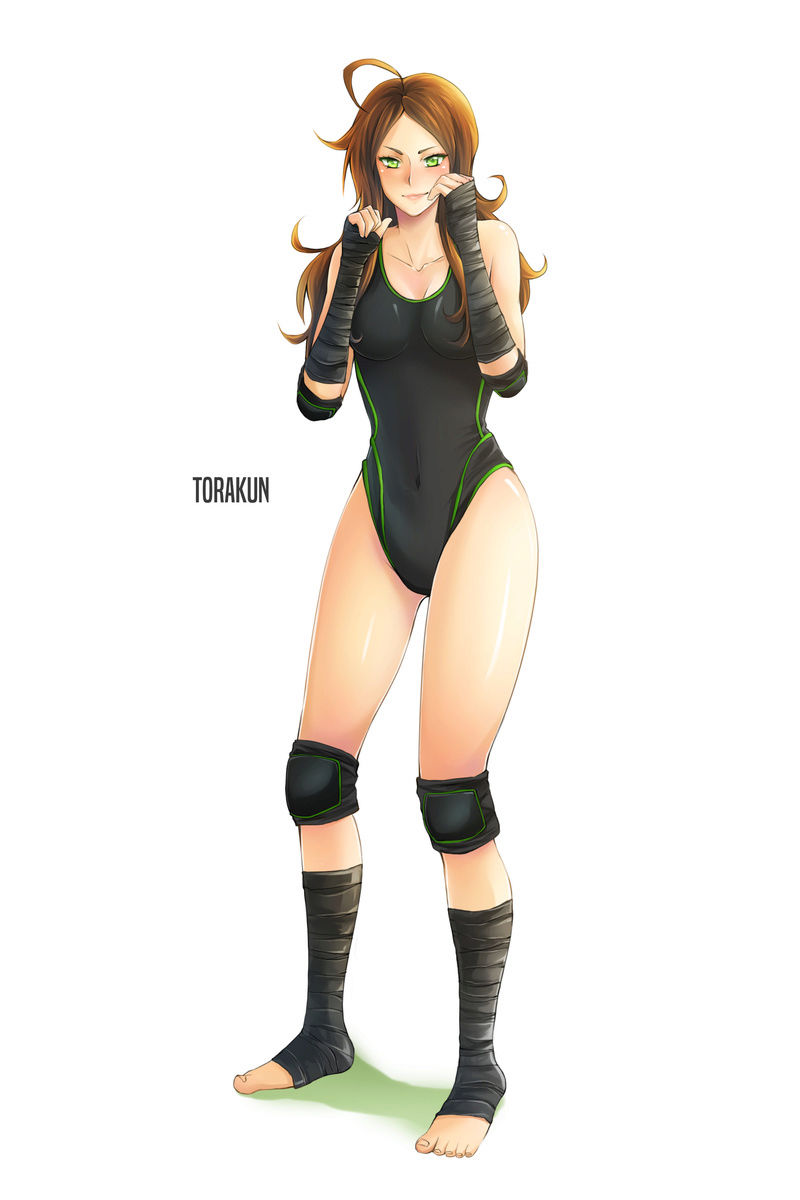 Her challenge having been made she softened her expression and lowered her voice so only Lauren could hear. "In all seriousness though, good luck and may the best woman win." She marched forward to offer a handshake to Lauren. If accepted she would then return to her corner and stretch a few more times before the bell rang.
_________________
Valicon's Roster

Well that was interesting, it seemed her opponent was happy to boast to the crowd, but wanted to make it clear after that she meant her words with respect. Understanding, and feeling similar, the texan smiled at her opponent while reaching out and shaking her hand.

Rather than let it go though, Lauren decided to spice things up, keeping a firm grip of her opponents and instead pulling her in close to slam a forearm into her face!

"I appreciate the respect honey, but I need this win, and I'm not going to let it slip away!"

She exclaimed, as the referee girl saw the blow and immediately called for the bell to start the match, while Lauren raised her taped foot to try and stomp on Rebecca's breast!
_________________
Check out the recently revamped Roster Page, now with pics!

Rebecca had about 5 seconds of thinking this might be a rage free day before a forearm collided with the side of her face before the bell has even rung. That was always a good way to get on her bad side, any cheapskate, especially low blows. But of course she had no time to contemplate it as taped feet rained into her chest and she was forced to go on the defensive. She tried to find an opening in Lauren's kicks, if one presented itself (like a slowing down) Rebecca would launch herself at the other to tackle her to the ground and try to roughly grab those Texan breasts.
_________________
Valicon's Roster

Lauren's brief, and mostly unfair, assault was suddenly ended as Rebecca managed to catch her bare foot and taking her down to the mat, getting a grunt out of the texan girl. Before she could try to get up however, her redhead opponent pinned her down to the mat!

"Earn it then. In the mean time I'll be enjoying these nice boobs of yours " Rebecca was in no mood to play as she used one of her hands to grope Lauren. The other began to slowly undress her opponent. If that worked then Rebecca had something rather mean in store. Mounting her naked opponent she would glare down at the Texan before ruthlessly beginning to slap her tits.
_________________
Valicon's Roster

This...was already starting off badly. Rebecca was heavier and stronger than her, something that became very clear very soon as she pulled the straps of her outfit off her shoulders, and within seconds, had the smaller womans bare tits exposed and flashing for all the audience to see!

"FUCK!" Lauren cried out, her position making it impossible to stop the straps from coming down, and attempting to cover her chest...only for Rebecca to slap one of her breasts with force, getting a shriek from the trapped texan, the shock of the blow leaving her wide open to too more hard slaps, her nipples getting smashed, before she had the frame of mind to cross her arms over her tits. "I'll...I'll get you for that!"
_________________
Check out the recently revamped Roster Page, now with pics!

"You know, you are doing a lot of threatening for a woman who is currently on the receiving end of a boob beatdown. You would do better to save your remarks until after you get out from under me." Messing with her this way was starting to calm her down, now she could think clearly about what to do. She could continue to torment her more...or begin working towards the win...she chose the latter option.

Getting up from her position she would attempt to bring up Lauren to her feet and then deliver a stunner before attempting to make her completely naked.
_________________
Valicon's Roster

This fight was going very poorly, even by Lauren's usual standards. The texan was already half naked just seconds into the fight, and was getting her tits slapped around like they were nothing, each slap getting a painful and embarrassing yelp from the girls lips.

Finally, the assault stopped and Lauren was pulled up to her feet. Blushing, embarrassed, and angry, Lauren let out a yell and swung her arm, trying to blast Rebecca with a hard punch to the face...only for the red-head to move aside, catch Lauren around the neck and drop her chin down onto Rebecca's shoulder with a stunner, dropping the dazed woman down onto her back, and leaving her easy picking to be stripped, soon completely nude on the mat!
_________________
Check out the recently revamped Roster Page, now with pics!