Search
Latest topics
» Mariko Ishii vs Colette Rivers
by LARIATO Today at 12:20 am

» John Carnaby vs Nora Novak - Play Fighting
by LARIATO Today at 12:18 am

» Julia Rogers vs Rosa Cabrera
by LARIATO Today at 12:18 am

Alright, so her previous forays into Friction had not ended well.  But this time would be different.  Thst is what she told herself as the Frankish War song began to play and she marched into the arena.  The roar of the crowd as the crimson warrior marched down to the ring was loud and boisterous, and it heartened her to hear that even after her last couple of screw ups.

Entering the ring she did one circuit of the ring to give them a Warrior's salute, then settled into her corner to await her opponent.
_________________
Valicon's Roster 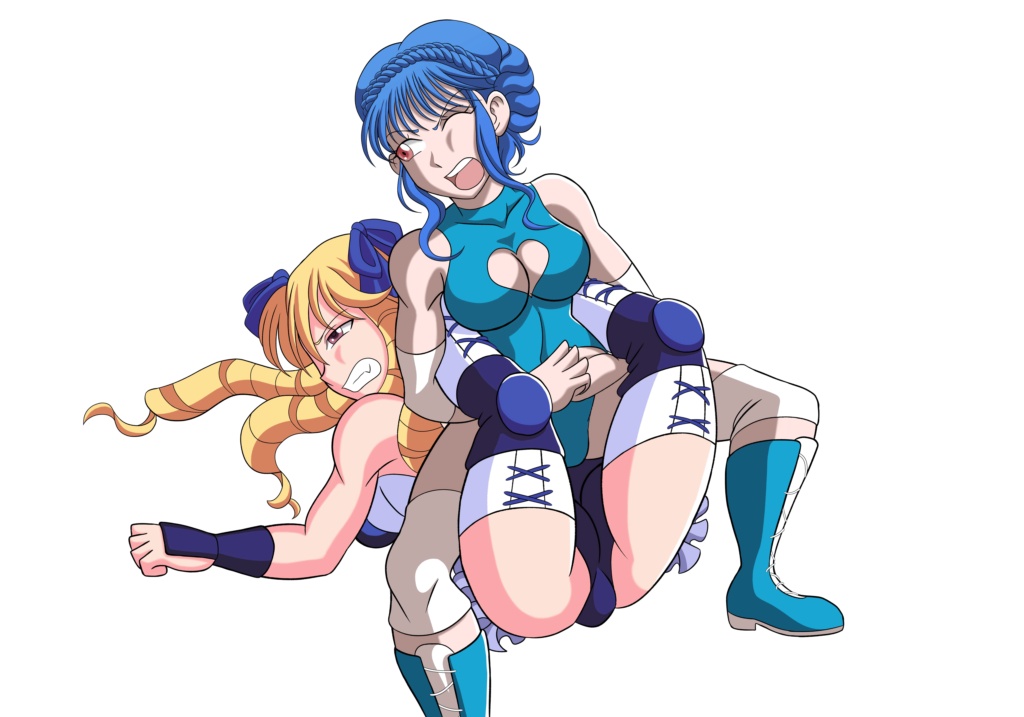 Mary was doing a couple of slow stretches in her blue leotard. This was her AFW debut, her first appearance in front of an audience that dosen't know her that well. There was a sense of fear in her about not making a good first impression to the AFW audience. But she knew she had to, and she had to prove herself against her opponent tonight. The AFW official gave her a signal to come to the ring, as her opponent had already made her entrance and was waiting for her.

Mary made her way to Guerilla position, and came out of the curtain to the stage, the crowd not knowing how to react to this reserved Blue Haired Girl.

She slowly walked down to the ring, walked up the steps, and went underneath the second rope, and headed to her corner, getting a first look at Rebecca.

There was an instant liking to this shy girl. As a competitor Rebecca liked them red hot and raring to go. But as a person, this kind of quiet and shy act really set of the mommy instincts she had. Going forward to stand in front of her she would stare down at her for just a second before wrapping her arms around Mary and giving her a hug. "Pleasure to meet you Mary, and the only disappointment you could have given me was not showing up. I can tell there is a fire in you, let's see if we can't bring it forth."
_________________
Valicon's Roster

"Oh, Thank you." Mary replied to Rebecca's message. Her opponent was clearly very athletically built, with a midsection Mary could only dream of. Oh well, time to try her hardest.

Rebecca was all too willing to oblige. Lockups were her favorite way to start a match, they gave her an opportunity to judge her opponent's strength for herself, especially as it compared to her. She would try to push Mary to the ropes, if she made it she would whip the blue haired beauty across the ring then try to catch her on the return with a snap belly to belly suplex.
_________________
Valicon's Roster

Mary and Rebecca engaged in the Lockup, trying to overpower their opponent. Mary could feel a noticeable strength difference between her and Rebecca, which definitely worried her. Rebecca pushed her back into the ropes, and then whipped her to the other side. Mary couldn't stop running, Rebecca was really strong, and she was caught and thrown with a Belly to Back Suplex, crashing on her back.

Springing back to her feet quickly after that suplex, Rebecca was not at all surprised to see Mary do the same as well. She had sensed the fire in her and was now beginning to see it for herself. She would not give her a chance to use it as the moment she saw Mary beginning she rise, she was already on the move, running back and bouncing off the ropes to add momentum to her charge attack, this one a Lariat, looking to knock her head clean off
_________________
Valicon's Roster

Mary was regaining her composure,getting caught off guard by the Suplex from Rebecca. Mary waited for Rebecca's next move, which was coming at her with a Lariat.

Mary was very patient, once Rebecca got close to her, she would attempt to grab the Lariat arm, and if that was successful, Do a Judo-Style Throw to slam Rebecca to the ground.

Rebecca went from offensive, to sailing over Mary's shoulder. She landed with a thud on her back, a gasp escaping her as pain raced up her bsck. Fortunately for her she was as tough as they come and was bsck in her feet in seconds. "Gonna have to do a lot more to beat me Mary."
_________________
Valicon's Roster

Mary managed to reverse the inevitable damage that would have been recieved for the Lariat. "I know, but I won't give." Mary replied to Rebecca.

Mary made her next move, charging at Rebecca, before quickly attempting to go around Rebecca, get behind her, and Waist Lock her from behind for a German Suplex attempt.
_________________
https://www.afwrpg.com/t21368-epicsnivy-s-league-of-epic-ladies#561231