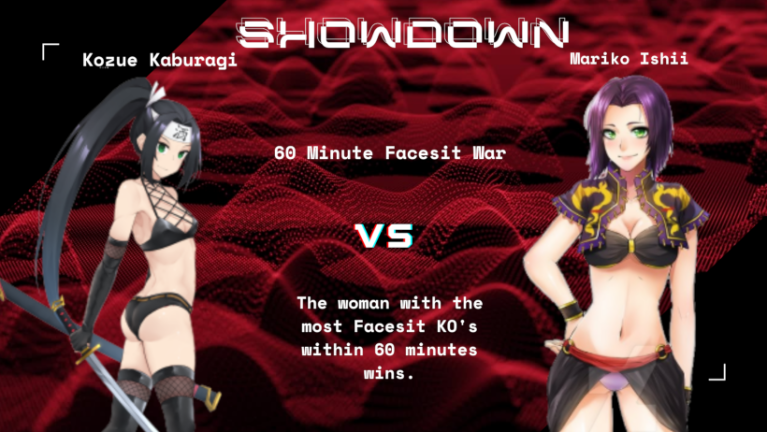 Facesit War Match
Points are gained by using a Facesit to submit or KO an opponent
The opponent with the most points after an hour will be named the victor
_________________
Check out the recently revamped Roster Page, now with pics!

It had been years ago, but Kozue could still remember what it felt like the last time she was prepping up for a match with Mariko. Despite what people thought about her way of fighting, she didn’t blindly jump into every match she had. She did her research, put time into anticipating her foes, spent a great deal of effort when it came to anticipating the way they would come at her. She had a gameplay - it was a wild, crazy gameplan most of the time, but it counted.

But against Mariko, she had drawn blanks. She had tried to figure out the best way to deal with the woman, but nothing really clicked, no matter how many times she ran things through her head or the strategies she pursued. She was too good, too smart. She didn’t excel in any area, but she wasn’t deficient in anything, either, making an opponent that was so well-rounded she could handle any threat. Kozue’s only real choice was to go in and fight with her style as best she could, and hope that would be enough to overcome the Japanese beauty.

It wasn’t, not that day, but simply trying had led to the best match of her entire life.

And now she had the chance to do it all over again. Sometimes, life was fucking awesome.

The shadows grew across the arenas the lights faded and Kozue’s theme played, heralding the New Jersey NInja’s arrival. All around the audience lights flickered, bursts here and there, as a figure flitted through them. Some saw her pass by her side, running down the aisles. Others saw her dashing around the ring, circling it. Even others saw her fly overhead, moving a dazzling array of flips and somersaults.

When it all came together and the lights came back on, however, there was only one Kozue Kaburagi, sitting in the middle of the ring with her legs crossed and her eyes locked at the curtain. The crowd cheered, loving every second of it, but she didn’t pay them any mind.