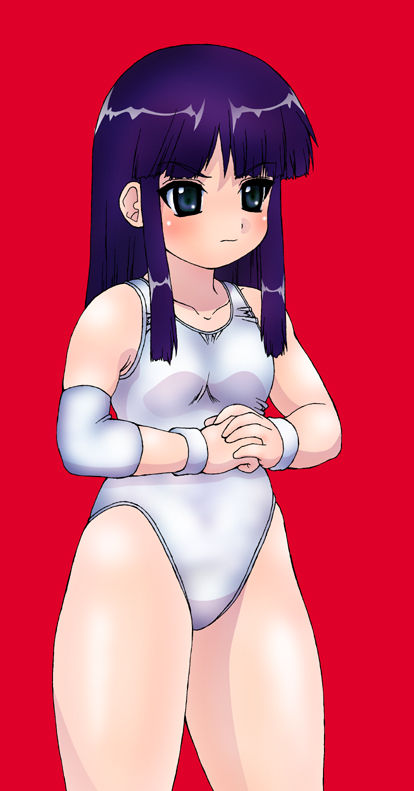 "Hmph! Finally, something to do." Yasuko yawned as she pulled her leotard out from the wedgie it'd worked itself into. She braced her hands against her back and then arched, letting out a satisfied sigh as she heard the air in her joints pop. Her eyes narrowed as she adopted her serious persona, and strolled out the door. She still wasn't totally used to the funny looks she got in the hall as a result of her condition, but she held her head up high as she walked towards the curtain line.

"Here we go." She muttered to herself as her entrance theme, Rising Hope by LiSA, began to play over the speakers. She made her way down to the ring, letting the mixed audience reaction wash over her. Most were a bit confused about the seemingly very young girl making her way down the ramp. Yasuko sighed. She considered yelling at them that she was, in fact, 20, but decided against it. She climbed up into the ring and made her way quickly to a corner, waiting for her opponent with a stony expression.

Sierra finished lacing up her boots as she waited for her opponents entrance to finish. She hasn’t been told what kind of match she’ll be in only that it would be announced when both competitors were in the ring. What she was told was that she would be facing off against a girl that was much smaller than her in stature, a kawai as the management in AFW called them. Sierra didn’t know why she was being put up against her or why they thought it was a good idea but they were adamant about it and with Sierra still learning her way around AFW she might as well accepted it in hopes of more matches down the line.

Hearing her music start the Egyptian stood up and made her way through the curtain and to the arena. The crowd screamed and cheered as she walked past but some looked confused as they looked at her and the smaller girl that was in the ring. It looked as if the smaller girl was being sent to slaughter as this much bigger Egyptian entered the ring. When she did she gave her opponent a small nod of respect before she leaned into her corner and waited for the ref to announce the match and ring the bell.
_________________
RINGROPES RINGROSTER
https://www.afwrpg.com/t20768-ringropes-ringroster#552569

Yasuko watched her opponent as the larger woman made her way to the ring. The diminutive wrestler crossed her arms, watching Sierra like a hawk, her eyes intensely focused. She knew she was the underdog in this match. Or, at least, that she was considered as such. She was also sure that her opponent considered her an easy win. However, she was going to prove that she should be taken seriously, despite her condition! After this, nobody would look down on her - figuratively speaking - again!

Yasuko didn't speak as the referee walked out to the center of the ring. She simply stared her opponent down, adopting a smug half-smirk that didn't reach her eyes.

The two wrestlers stared each other down from opposite corners of the ring as the ref entered the ring. Sierra stared at her opponent who she just found out was named yasuko. Sierra leaned against the turnbuckle with her elbows propped up on the top ropes as she stared at the smaller girl and tried to gauge just who she was fighting against. From the look of the girls stony expression she had something to prove and she was going to use the larger Sierra to prove it.

The Egyptian welcomed her to try as the ref finally began announcing the match. Sierra learned both in an earlier match in her afw career and from her time in the cage to never underestimate a smaller opponent just because you’re bigger than them. Sierra would have to be careful of her speed and any tricky moves or underhanded tactics and...and. Wait. What did the ref just say.

The smaller girl looked even more smug than before. It looked like this type of match was right up her alley and she was practically vibrating to start. Well Sierra was happy to oblige as she heard the bell ring and she stepped away from her corner and began to cautiously circle the small raven haired girl.
_________________
RINGROPES RINGROSTER
https://www.afwrpg.com/t20768-ringropes-ringroster#552569

Yasuko regarded her opponent steadily as the larger woman reacted with what seemed like panic to the news of the match type. Admittedly, neither fighter had been informed as to the match type before hand, but the pint-sized ravenette had had a good feeling when she'd heard about the match that it would be something she could win. And, judging by her opponent's near-panicked reaction, she had been right on the money.

"Is something wrong, Miss?" She smirked, her voice more than a little snide. The bell signaled the beginning of the match right as Yasuko stepped out, pretending to study her opponent as if she hadn't already done so. Her opponent started circling her, and she gladly followed suit. The two fighters circled each other like wild cats ready for a fight.

"I apologize, I'm being rude. My name is Chikamatsu Yasuko. Though American audiences know me as Yasuko Chikamatsu. Different naming conventions I suppose." She shrugged, not actually giving a damn about the topic. She suddenly charged forward, the only indication that she was about to do so being a slight narrowing of her eyes, and a twitch of her leg muscles as she took off. Upon getting closer, she tried to launch herself at her opponent, looking to wrap her arms around the back of Sierra's head and drop down. If it didn't work to smack the larger woman's head against the canvas, it would hopefully at least take the woman down!
_________________
The House of Divas

Sierra frowned as she heard yasuko’s comment about the Egyptians reaction to the announcement of this match. Sierra wasn’t exactly subtle when heard about the conditions on how to win and frankly she still felt surprised as she stepped away from the corner and circled her opponent. If someone asked her to knock someone out in a match she would do it no questions asked but would use more traditional means such as closing their windpipe with her arm or good old fashioned blunt force trauma.

“ My name is Sierra Oasis and I figured as much if my experience in Japan told anything. But just so we’re clear I’m not American. I was born in Cairo. she replied when suddenly yasuko dashed forward and jumped, wrapping her arms around Sierra’s head as she tried to bring her down. Sierra kept her footing however and instead turned yasuko’s momentum against her and with her strength threw the smaller girl across the ring to land on her back.
_________________
RINGROPES RINGROSTER
https://www.afwrpg.com/t20768-ringropes-ringroster#552569

Yasuko rolled her eyes as Sierra frowned at her teasing. If the bigger woman couldn't handle a little light teasing, she certainly wasn't going to last much longer in this match, let alone the AFW! When she saw her opponent blush, she laughed smugly.

"Getting all flustered by your lewd thoughts? We'll see if you can act on them." She was feeling good about her chances until Sierra was able to rather easily catch the smaller wrestler and toss her away, causing her to land hard on her side, winding her. She laid there, catching her breath as her opponent introduced herself.

She beckoned the Egyptian to come and attack her and with a cautious look of her surroundings Sierra obliged. She would dash forward and try to kick her leg out into yasuko’s chest with a big boot that would send the smaller girl launching back if it connected. Sierra planned to launch yasuko back first into the turnbuckle behind her and daze her enough for the next part of her attack.

If it all went to plan Sierra would charge forward and would try to send her shoulder into yasuko’s gut with a shoulder charge.
_________________
RINGROPES RINGROSTER
https://www.afwrpg.com/t20768-ringropes-ringroster#552569

Just as Yasuko had hoped, Sierra fell for her taunting and rushed toward her. As long as she was able to time this right, she would be able to get in a pretty decent hit. What's better, the match was No-DQ so she could do whatever the hell she wanted! They really did stack the match in her favor! As her larger opponent came in for a kick, Yasuko ducked under Sierra's leg and tried to deliver a palm strike to the crotch!

"Really, are you going to treat this like a normal match? Very foolhardy, Miss Oasis." Yasuko chuckled to herself, eyes still intense as she stared her opponent down.

"You come from Egypt. But you're in my country now. Keep that in mind when you're showing the proper respect." Her voice was icy, practically dripping disdain as she lectured her opponent.
_________________
The House of Divas

Sierra dashed forward towards yasuko and kicked her foot out for her big boot attack. The Egyptian knew that the smaller girl was baiting her to walk into her trap but Sierra figured that yasuko would dodge out of the way and that Sierra would spend the first part of the match having to play cat and mouse with the girl. That was what Sierra was prepared for.

What she wasn’t prepared for was yasuko ducking underneath her kick and sending a palm strike straight to her defenseless sex. The strike made Sierra’s eyes bug out of her head and caused her to collapse onto her knees holding her crotch in her hands all while she was forced to listen to yasuko smug and strangely anger filled monologue about proper respect.

Growling out slightly Sierra turned her head partially to see yasuko out of the corner of her eye as she listened more to her. Bracing her hand against the canvas for stability Sierra tensed her muscles slightly. ”You talk too much.” she would say before she would suddenly launch her leg backwards in hopes that of hitting the kawai girls belly.
_________________
RINGROPES RINGROSTER
https://www.afwrpg.com/t20768-ringropes-ringroster#552569