Meeting on the wrong foot (for Teenwrestler)

Meeting on the wrong foot (for Teenwrestler)

It was another day of training for Saika Tanaka, her fifth day of training this week. She had been increasing her weekly regimen after being signed to AFW, wanting to get into the best shape of her life for her debut! While she had been dominate on the independent scene, Saika knew the men and women on the Tension brand were a step above the competition she had faced thus far, perhaps even tougher and stronger then the women she fought in her MMA days.

Stepping into the gym from the women's locker room, wearing a white one piece with black sleeves with black boots with blue stripes that went up her calves and were topped off with blue knee pads, Saika gave a quick look around the room, a white towel in her hand. There were many faces in the gym today, some of them AFW competitors, but Saika didn't give so much as a wave to any of them as she went over to the abdominal bench. She preferred to work out in solitude, and wasn't much of a social butterfly to begin with! Doing some last minute stretches, Saika prepared to do what she did every time she visited this place, push her body to the limit. 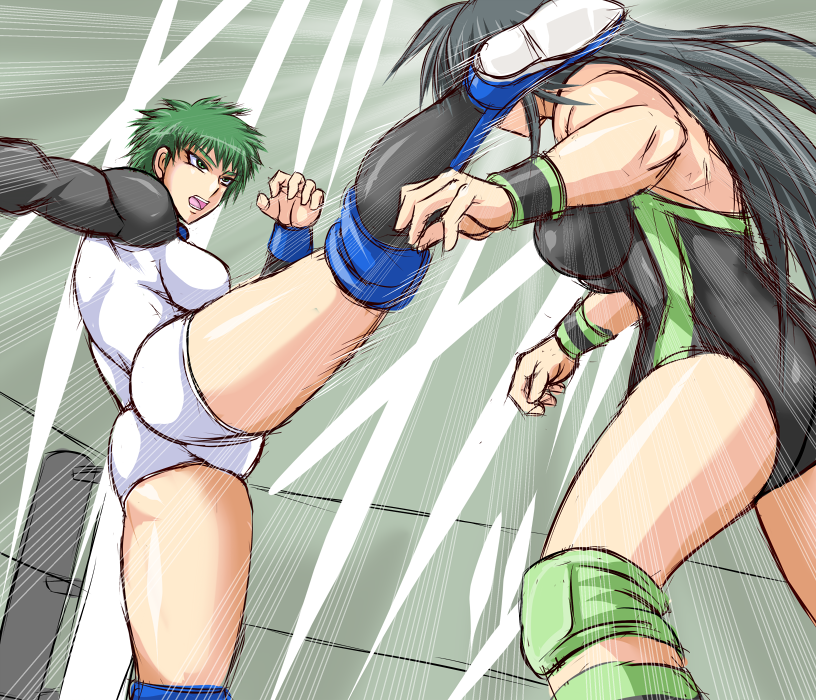 "One.......two......three!" It's over, and your winner is.....the wrestling prince "Daisuke Takeuchi!!!" A loud shout was heard of an impromptu referee officiating a match inside the Tension gym ring.

Inside the ring, a average built rookie wrestler was being pinned by a more well build chiseled frame wrestler. There was a smug grin on the face of the victory as he rose back up on his feet, placing his bare foot ontop of the other male wrestler's foot as he posed over him, "Hmph...weak!" the arrogant yet handsome prince would say before pushing the other outside the ring using his foot.

That man was "Daisuke Takeuchi". Daisuke passed his fingers through his sweaty hair to brush them back as he leaned on the ring ropes as he looked at the man he just dumped out of the ring. The wrestling prince's body glistened in sweat as he had just gone through a tough spar yet he had emerged victorious. "Is there no one who can give the prince of wrestling a decent challenge? Looks like all these common filth are beneath me" he would bark before pushing off the ring ropes and standing in the middle. His chiseled frame on display for the rest of the gym members as he posed, adjusting his wrestling briefs as well a bit.

"All these Tension rookies are an embarrassment...I can't imagine how they were drafted here but I suppose none can stand up to the best wrestler in AFW" he would grin as he looked around before slowly moving to the ropes to grab his towel to wipe the sweat off his face and then taking his water bottle to chug some water to refresh himself.
_________________
Tension:

Saika leaned her back against the abdominal bench, ready to work out her already well developed abs when she heard a commotion from the ring in the middle of the gym. The former MMA fighter was used to the constant spars and even full on matches rookies would partake in on the practice ring, Saika would participate in a spar or two herself on some days, but the name the refree called struck Saika as odd.

"Wrestling prince?" Saika muttered to herself as she looked over to the ring. The arrogant sounding title seemed to belong to the arrogant looking man standing with his hand raised in the middle of the ring, his foot on the chest of his unfortunate opponent. Saika was disgusted with those who disrespected their fallen foes in such a fashion, especially in what should be a friendly environment for practice! The man was already beaten and laid out, making any further humiliation unnecessary! The stone demon was further irked when Daisuke pushed his opponent out of the ring, showing even more disrespect, before openly calling out anyone in the gym to step out and take him on! To top it all off, he decided to call himself the best wrestler in all of AFW! Finally having enough of the so called Prince's attitude, Saika decided to get up from her excersie and walk towards the ring, shouting to Daisuke as she walked down.

"Prince of wrestling huh? I would think a so called "prodigy" like you would know better than to throw out an open challenge!" Saika said with a defiant smirk as the entire gym turned to see the woman who dared to take Daisuke's challenge.

The tension gym was used to Daisuke showing up every now and then to beat up the younger rookies, guys or girls. This was no exception as the prince beat up a rookie wrestler to make himself look good in front of the rest of the crowd and gloat about his wrestling status in Tension. There hadn't been a good upcoming star in Tension for months and nothing was going to change that so the prince decided to take advantage of the rest of the mid card rookies and make them look like jobbers to enhance his own fictitious win streak.

He wiped the sweat off his face and chugged down water from his bottle, saying a couple of more final remarks about the rest of the crowd before just about getting ready to exit the ring when he heard....someone shout out to him. Hm? Oh? First off, if you have something to say....come up to this ring, face me face to face, man to woman and whatever you got to say to me, say it here"he said calling out this mysterious woman as he stood in the middle of the ring, waiting for this woman response. And if you cant talk while facing me in the middle of the ring, then don't waste my time woman"he barked at her.
_________________
Tension:

Saika's smirk turned into her usual serious frown as Daisuke continued his taunting. This guy really didn't know when to shut up! She had seen him in this gym before, beating up rookies left and right, and it made her blood boil when he saw him get all cocky after each win. Of course he won, they were rookies, almost all of them in their first years of professional wrestling! The fact he treated absolutely destroying them in the ring as something to brag about was infuriating. He could have done so much good in training these young lions, and he chose to take advantage of their naivety instead. Saika had always wanted a chance to show the Prince that some rookies aren't what they seem, and to give him a kick in the mouth on top of that, and now might be her chance!

Entering the ring, Saika wasted no time in getting close to Daisuke, staring into his eyes and making sure he heard every word come out of her mouth.

"I don't talk often, especially to arrogant bastards like you, but I know I'm not the only one in this gym tired of you running your mouth and beating up rookies to make yourself look good. Dare I say, someone who engages in such behavior must not have such a good win/loss record themselves,"

Almost everyone in the gym was staring at the commotion in the ring at this point, in shock of the gall of the green haired unknown to step up and call out the Tension mainstay!

The wrestling prince was not amused by the fact that this unknown female wrestler was stepping up to him. He thought that perhaps if he could intimate this female wrestler she would pack her bags and mind her own business, leaving the prince be but apparently that was not going to be the case. Daisuke was standing in the middle of the ring and constantly glared at the woman who was outside the ring before she stepped in the ring. Daisuke raised his eyebrow as she approached him, he tensed his body and was ready for a tussle.

The wrestling prince stepped up to her, closing in the gap even further to psyche her out. His abs pressed against hers, chest to chest and head to head as he tried to intimidate her by getting up to her in a classic wrestlers staredown. "And just WHO are you?"he would say as his sweaty body further pressed up against hers.

Saika entered the ring and almost immediately felt the wrestling prince press up against her, his muscular body pressing up against hers, staring down at her with anger in his eyes at her words. Saika, however, didn't back up one bit, staying still as she stared into the glaring eyes of Daisuke. The AFW superstar seemed like someone who could talk the talk, but would struggle to back it up against an unintimidated opponent.

"My name is Saika Tanaka," she said with a matter-of-fact coldness in her voice, "I can assure you, I'm not just 'some rookie'"

Daisuke watched as the green haired woman entered the ring, Daisuke didn't want this to be a whole new scene so he immediately walked up to the unknown rookie and pressed up against her, bumping heads and chest as he tried to back her off, hoping a face to face interaction with AFW veteran would scare her off. Instead, he would meet with equal force as she bumped back, pressing her own breasts against his chest and not backing down at all as the two nudged and shoved against each with just the use of their bodies.

"Well Saika, allow me to introduce myself to you. I am the wrestling prince, Daisuke Takeuchi and this is MY ring that you just barged into. I suggest you take off"he would growl.
_________________
Tension:

Saika knew Daisuke was trying to avoid making a major scene, but she didn't care. After all his bragging and posturing, Saika wasn't going to do him any favors!

"If this is your ring, you're going to have to kick me out of it!" Saika said as she glared into his eyes, seeing what the veteran would do.