Wrestling Style
Tadao tends to go for strikes early on in the match, looking to use his sharp limbs to strike at his foes, and only when they're notably weakened will he then move onto throws and submissions, hoping to keep on the advantage wherever he can.

Finisher
Negative Knee Impact: Tadao will throw his opponent's head into the corner post, looking to daze them before climbing up to the top turnbuckle, where he will leap off with a diving knee to the back of the opponent's head. 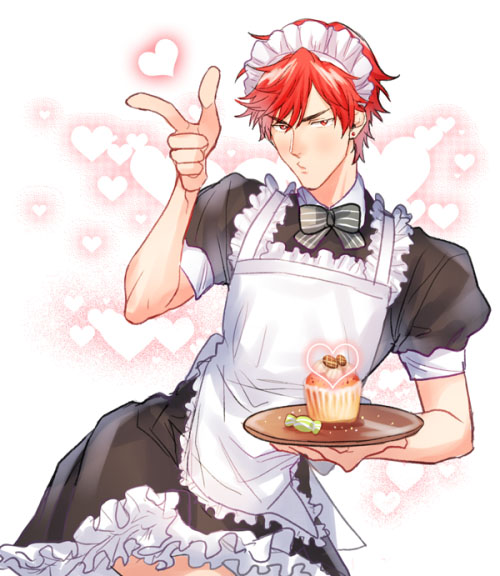 Tadao is a happy and charming person to be around, looking to keep everyone's mood positive and do what he can to keep them that way, even if it means going back to his housemaid ways. In the ring his main goal is to try and put on as fun a match as possible with his opponent, looking to cheer up the crowd and get a smile on their faces. If the time comes where he needs to get serious however, he will rise to the occasion and dig deep to bring out the intense passion he has. In the ring Tadao prefers to wear his Maid outfit, as he feels most comfortable in it as well as feeling like it shows off his best features.

Left on a doorstep of an orphanage at birth, Tadao was initially raised with no parents. Being awfully quiet in his first few years, Tadao was hesitant to bond with the other kids, but found some interest with some of the female children, who tried making him feel welcome and involved whenever they could. Around 5 years of age, Tadao's lucky day came when an elderly couple came in and adopted him. It turns out the couple were very rich, living in a gigantic mansion filled with servants and housemaids willing to help Tadao and his newfound parents at any way they could. As he grew up with his adopted parents, Tadao was particularly fond of the housemaids who worked around the house, even going as far as to help them do work.

Finding more and more enjoyment in helping, Tadao eventually got permission to become a temporary housemaid around the house, even choosing to get his own feminine outfits made, as he felt they looked better for showing his fit form off. He continued this for many years until around 18 years of age, when his elderly parents were getting a lot older in age. The parents knew they didn't have much time left, so decided to leave their entire remaining fortune to Tadao before leaving to go on a permanent vacation. Being left with so much money, Tadao decided to use it on fulfilling things he had always wanted to do, whilst still making sure to help out around the mansion and keep care of his servants.

One particular interest came to mind was professional wrestling, which he found after a servant had mentioned it to him. He soon found himself becoming enthralled with the passion and energy the sport brought, as well as how excited the fans were to watch it. With that his new path in life was set, as Tadao was determined to become a wrestler himself, hoping to bring excitement to the world with his unique style.

Entering a wrestling school, Tadao passed with flying colours and soon caught wind of the AFW, where he now finds himself as a wrestler in the Tension Division.

Tadao is a bisexual, showing interest in both men and women.

Wins:
Vs. William Castur (Via Orgasm)