FOR MORE INFORMATION, CHECK THE PROFILE OF HER MANAGER, MASATO KAJIWARA


Wrestling Style
The best way to describe Katsu's wrestling style would be power. Katsu will do whatever she can to grab you and deliver whatever punishment she can, whether it's a powerful throw or a submission. The only problem with Katsu's in-ring ability is that as a match goes longer and longer, she will find problems in keeping up the level of intensity as she fights, and will usually need to take a breather to regain her energy, which may lead her to be open for attacks.

Signature
Deep Six: Katsu will throw her opponent into the ropes and catch them in her arms on the rebound, spinning around as she does before falling back and violently dropping them to the ground. Video for reference

F-5: Katsu lifts her opponent onto her shoulders in a fireman's carry, trapping their head with her hand whilst the other grabs their leg, before throwing their legs out to spin them out whilst she drops to the mat, causing them to crash their head and upper body to the floor.

Torture Rack: Katsu will lift her opponent on her shoulders, making sure they're facing the sky, before hooking one hand on their head and the other on their leg before pulling down on both end and flexing the ends of their back out, looking to get the submission victory. 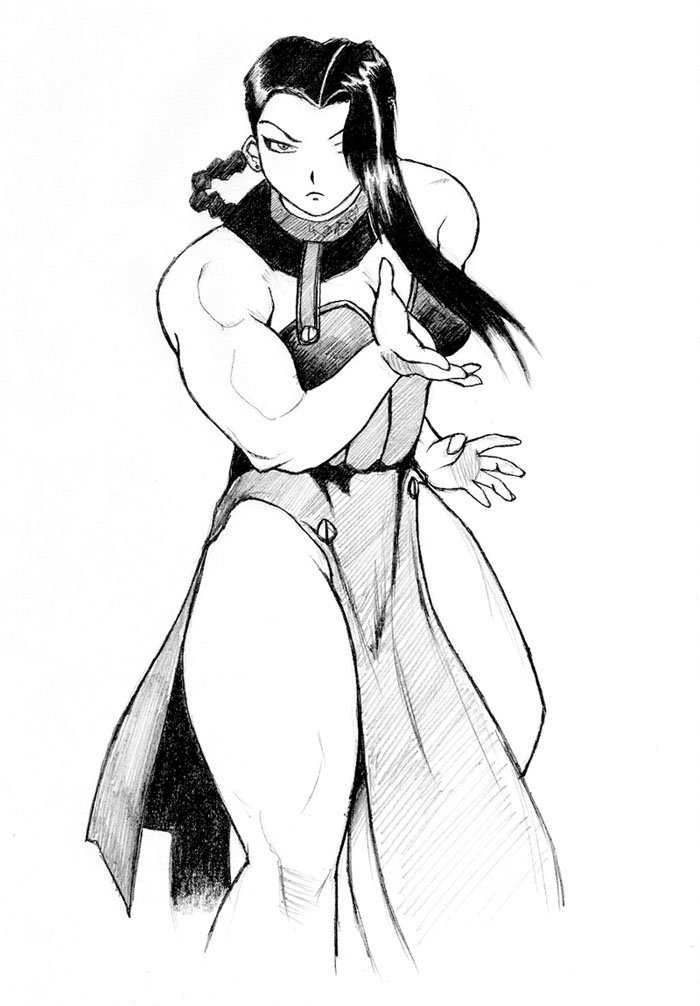 Katsu only answers to one man, Masato Kajiwara. She is obedient to him and will do whatever favour he asks of her, so if you want to avoid her wrath, it is extremely recommended that you don't get on Masato's bad side. Katsu is a violent person, looking to take her anger out on anyone she deems fit in revenge for her pained childhood. She doesn't speak many words in the ring, preferring to let her actions do the talking. Japanese is her primary language although she can speak fluent English.

Katsu grew up in a troubled childhood, she was born with unusual traits, achieving miraculous strength from a young age, leading to her much toned body and tall height, her parents chose to neglect her over her older siblings, who bullied her over her "freakish" appearance and constantly picked on her. As she went through school she achieved a similar fate, getting constant bullying from the boys and girls for her manly looking physique and for a few years she found herself with no friends whatsoever.

During high school though, was when her life took a massive change, as she met Masato Kajiwara for the first time. He was the first person to ever accept her for who she was and the two quickly became friends. Masato filled her mind with the idea of payback, to seek revenge for all the people who ever did her wrong. She eventually fought back against the siblings, who (along with Masato's help), made sure they would never get on her bad side again, also promising not to rat her out to their parents.

Eventually the duo quit high school, and at 18 years of age, robbed Masato's uncle (who was a man of much wealth), abandoned their families and went on the road, leaving their past lives behind. When Masato made his underground fight club, Katsu was the main attraction, inviting anyone thinking they were up for the task to fight her, being promised a huge cash prize if they did. Katsu practically slaughtered any competition they had, leaving her opponent's in painful conditions whilst she and Masato racked up the big bucks.

Eventually both got wind of the AFW, where they both joined the Tension division in the hopes of getting even more money, as well as showing off Katsu's skills to the world.

Katsu Ikehara and her manager, Masato Kajiwara, make their debut in AFW, where the Japanese Giant finds herself going one on one with the green haired amazon, Amelie Roux!

Katsu finds herself going one on one with the legendary Killer King, in a no holds barred match!