Finishing moves:
Cradle to the grave: A massive choke slam

Destruction is imminent: A F-5 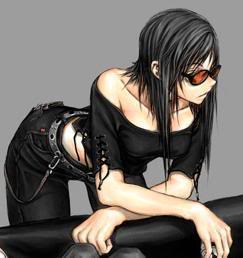 Personality : Lilith is a very strong willed woman, sometimes even coming off as just plain bitchy. In the ring she is merciless to her opponents giving them no quarter as she slams them around. Outside the ring she eases up a bit and enjoys herself, get a few drinks in her and you'll have her laughing and possibly trying to get into your pants. Something about really small kawaii girls puts her off her games in the ring and out.

Past/History:  Lilith grew up in the states in Detroit, Michigan and lead what most would consider a very hard life. Day in day out was a struggle with her and her family. So day by day they scraped by on what little they had. They were together though, that's what truly mattered to them though it didn't mean life got any easier and that each day didn't harden Lilith a little more. Eventually though Lilith moved away from her parents to head to college. She worked two jobs to pay her way through school living on what meager means she could. She never complained though she did what needed to be done.

Being naturally tall and strong it didn't take long for a small wrestling circuit to pick her up and get her into wrestling to help supplement her money. She loved it, the thrill of tossing other girls around and using her height and weight to demolish them. It was everything she needed and so she threw herself into it body and soul. In one particular match she went up against a very cute kawaii looking girl. What should of been an easy match for her devolved into the most humiliating match of her life. Not only was she made to submit and pinned. She was also forced to cum and fucked with a strap on by this girl right in front of everyone. After that she was never quite the same facing kawaii girls like that again. In fact she was sort of a jobber when kawaii girls wanted to get a victory. Though against normal opponents she was a terror still breaking them.

Eventually she went up the rank through circuits and finally found herself in Japan. The AFW picked her up, got her to sign on and she is looking foward to grow even further as a wrestler.