As far as weird gimmick matches contrived by Lily Bell went this one was mercifully cheap to produce for what she hoped was a lot of bang for her buck. Well, there wouldn't be a lot of bang in this match, she didn't think Maria would have agreed to a match with a lot of banging yet. The rules were simple and straight forward, a traditional, standard wrestling match to be concluded by pinfall or submission. The only difference was that the whole ring was dominated by an enormous, inflatable bouncy castle complete with big wobbly turrets that pressed up against the ring posts. The match was at the top of the card, the audience hadn't even finished filing in when Anne's entrance music started up. Normally she'd step onto the stage in the dark and be revealed by some cool pyrotechnics, but with people still finding their seats that was a safety hazard; so she had to settle for just running out like some normie shlub. 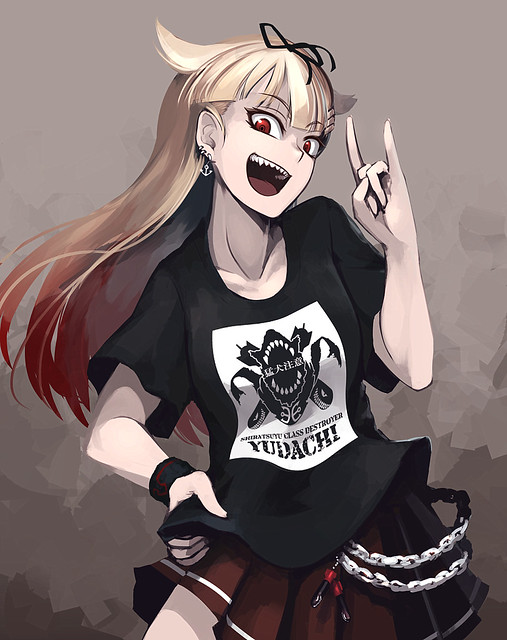 The blonde metalhead practically skipped out onto the ramp in a black Sex Machineguns tee shirt and her red plaid, pleated skirt. Full of energy she zig-zagged down the ramp giving high fives and fist bumps as requested and waving about the metal-horns gesture. She was generally a very lazy girl, but these entrances were very important to her so she always put in as much vigor as possible. She wanted the crowd excited so that their excitement could feed back into her match like some kind of perpetual motion machine of ass kicking awesomeness. When she finally reached the steel steps of the ring she stopped and made a show of very carefully and daintily stepping on the heels of her hightops and sliding out her bare feet. Bending down, giving the lucky fans behind her a quick glance up her skirt, she picked up the sneakers and set them neatly beside the steps. Only then did she spring back to life, run up the stairs and swing herself up to lay out on the top rope in her best pin-up pose. Rolling off to the inside she stepped onto the very cushioned floor of the castle, bouncing her way to her corner like an astronaut.

As ultimately tame as this gimmick match appeared to be, Maria still felt this sense of unease and nervousness pooling in her stomach. It wasn't the fact that she was the opener of the card. That never bothered her, even in Mexico. She just never expected to find herself wrestling in such a....flamboyant setting such as a bouncy castle. She made sure her hair was properly tied up in a ponytail to keep the strands out of her face, as the music kicked in to prompt some cheers from the fans lucky enough to get in early!

Maria jogged out, sporting a rather self conscious smile as she gave a shaky wave to them all. Her usual gear of spandex leggings and a short top remained, but her wrestling boots were replaced by normal tennis shoes, given the rather strict policy of no shoes in the castle. She glance up at the rockstar prancing to her corner, and couldn't help but chuckle at how the girl was enjoying herself. With a nimble jump, she landed on the apron, kicking off her shoes and rolling into the bouncy, rubbery surface of the castle. Already the veteran wobbled a bit, not used to the unsteady ground she had to contend with.

Anne couldn't keep herself still, nervous excitement sending up the old butterflies in her stomach. Bouncing on her toes she even found herself dancing a little to her opponent's entrance music with a little shake of her hips. She hadn't been back in the saddle for long and while Lily had tossed her some softballs before, now she was in the ring with a professional. Someone with some gold to their name. Sure, the match was silly as fuck, but it meant a lot to her to at least put up a good fight here. She wasn't anticipating an easy win here, or really even expecting to win, just not embarrass herself too badly. The pop that came from the crowd when Maria appeared told her that people actually knew who she was, like she had dedicated fans. Anne mostly had dedicated trolls who would reply to her social media account with a gif of that time James made her cry in the ring.

Focus up, Anne! Licking her lips she set her eyes on her opponent as she rolled into the ring. The woman looked to be about twice Anne's age, but still she was in phenomenal shape. Her eyes unabashedly looked her up and down appreciatively. Springing side to side she nodded her head up at Maria, "Sup!" She didn't wave but kept her hands resting on her hips, "Did she? Tsk tsk, she shouldn't go around telling lies." She flashed a playful wink. "Ready, mami?"
_________________
Character Selection (Availability may vary)

The 'mami' comment definitely took Maria aback. Since her time in AFW began she had no small amount of flirtations being flung her way by various members of the roster, but none felt so....direct as this one did. Anne wasn't even hiding the fact that she was checking out the older veteran, effortlessly bouncing in place. Clearly Anne had some level of experience moving in such a setting.

There was a reason Anne and Lily got along so well, both of them were absolutely incorrigible. There was no shortage of sensualists in the stable, but they might be the most brazen of the lot. As for Anne, she'd been in a few bounce houses in the past, they're a riot when everyone is in an altered state; but she had also done a little training on trampolines to try working up her courage to try more aerials. It had not worked thus far, but tonight she aimed to make an exception. "Well, I'm definitely not going to go easy on ya." She laughed, the concept of her having to pull punches with Maria seemed absurd to her.

At the signal from the official the match began in earnest, Anne continuously bouncing rather than trying to walk on the spongey surface. It took a little more energy but it avoided the balance issues. She hopped a slow circle left, and then back right, trying to spot an opening. In the past she'd have just charged in for a spear or hip press, but she'd been punished for that hubris too many times to try it with Maria. Instead she'd try something a little unexpected, with a hard bound she'd hop right up beside the luchadora trying to use the displaced air beneath her to springboard Maria up and bounce her further off balance.
_________________
Character Selection (Availability may vary)

The smack talk did a little to bring back the fire in the luchadora, as she waited for the bell to ring. She noticed Anne's continued focus on bouncing, wondering why she would intentionally expell all that energy and tire herself out early?

But Maria found that perhaps that energy conservation wasn't the primary concern on Anne's mind, as a mighty bounce displaced the floor beneath her, sending the veteran stumbling forward with a cry of surprise, her feet momentarily leaving the ground as she tumbled!
_________________
*sigh* Ok let me get the passcode.....all set, go on in!

Bouncing your friends off of their feet, sometimes repeatedly, was a favorite thing to do when drunkenly playing in a bouncy castle. But rather than continuously bouncing the MILF off of her feet like an obnoxious brat, not beneath her standards as it was, she instead took the opening to play a little more aggressively. With another upward bounce she kicked out both feet at Maria's midsection like she was a kangaroo, letting herself fall harmlessly on her ass, skirt fluttering up to now give everyone a clear look at her purple and blue striped panties. Yes, she could have worn shorts under the skirt, no she wasn't going to start now.

If the kick landed solidly, and all went according to plan, she'd let herself bounce back up as Maria doubled over and try to pull the luchadora's head down onto her raised knees for a codebreaker. She wasn't known for pacing herself in the ring, feeling like it was a crime to leave any gas in the tank when a match was over. Foreplay was for lovers, not for fights.
_________________
Character Selection (Availability may vary)

The bounce did it's work perfectly, displacing Maria's center of gravity and leaving her exposed enough for a pair of feet to slam right into her exposed stomach! The veteran's eyes almost bulged out of her skull as her hands instinctively covered her abs, doubling over to try and get air circulating back into her lungs, "GHUGH!"

She thought that the flying dropkick would be the worst of it....Anne was falling flat on her back so she had to have a few seconds to get to her feet right? Nope. Barely a second later, she felt Anne bounce back up thanks to the rubbery inflatable castle, grabbing her masked head and pulling her right down into a codebreaker!

The pain spiked around her skull, snapping her back to bounce hard on the ground, flopping on her stomach as the entire floor shook and undulated with every jump and impact the pair made!
_________________
*sigh* Ok let me get the passcode.....all set, go on in!

The drop had sucked up a lot of Anne's momentum, or rather, Maria's head had absorbed a lot of the impact that would have otherwise gone to perpetuate her bouncing. As the older fighter tumbled off to one side, Anne rolled to the other, shifting to sit cross-legged on the mat and catch her breath. This was a difficult pace to maintain, but high energy had always been her style. Rather than trying to climb back to her feet she kicked her legs into a seated hop, a couple of bounced later she was able to spring back up to stand a few paces from her opponent.

Allowing Maria the time to gather herself, Anne bunny hopped towards the edge of the ring to give herself a little runway. She intended to wait for the luchadora to rise and charge back at her in a few bounding leaps before launching herself, knees first, onto the woman's chest. In a normal ring she preferred a hip press to ride down onto the opponent's stomach, but she could get a little more air here so why not just come down into a schoolgirl pin.
_________________
Character Selection (Availability may vary)