Wrestling Information
Strengths: Kaori is known for her high paced, relentless strikes and acrobatics. A natural dancer and performer makes her almost always a crowd favourite too, true to her on screen persona she also displays tremendous heart and will press on for as best she can in the face of the odds.
Weaknesses: Kaori practically *is* her persona, if a devilish enough opponent can get into her head she can stumble and lost steam swiftly. She's also despite her acrobatic prowess a tad one dimensional in her offence and can be predictable if the fight goes on long enough.

Endurance: 3/5 - Kaori is well toned under that bodysuit, still she relies more on heart to get by when her body takes a beating
Strength: 2/5 - Not her thing, but she's quite fit all the same
Speed: 5/5 - A nimble cat
Defence: 3/5 - Rather adept at blocking strikes, needs to improve elsewhere though
Technique: 5/5 - Her years of acting practise and martial arts has ensured she knows what she's doing.

Strikes: 5/5 - Kaori's blows can outright take people out in a match, they're not just flashy
Submissions: 2/5 - Not her main forte but she has a couple of fancy ones under her belt
Powerhouse: 1/5 - Most of the times she grappled with someone were scripted in her show
Aerial: 5/5 - A dramatic performer so this is a natural given

The Kitty Knee: Done when getting up from a prone position Kitty springs up and leaps into the air to slam her knee right into her opponent's jaw to send them reeling, sometimes right out the ring!

Sentai Send-Off: When her opponent is on one knee Kaori runs off from the ropes and does a custom shining wizard, where the heel of her foot will crash down on the top of the opponent's head.

The Dawn Of Justice: Kitty rebounds off the ropes towards a standing opponent and rolls up on them into the powerbomb position and then rolls forward to hook her legs under their arms and slam them down into a powerbomb of her own!

The Kitty N Ultimate Strike: With the opponent on the ground Kitty N will bust out into a series of spins to build up momentum before delivering a spinning heel leg drop right onto their next, usually doing a split legged pin while posing for the three count! 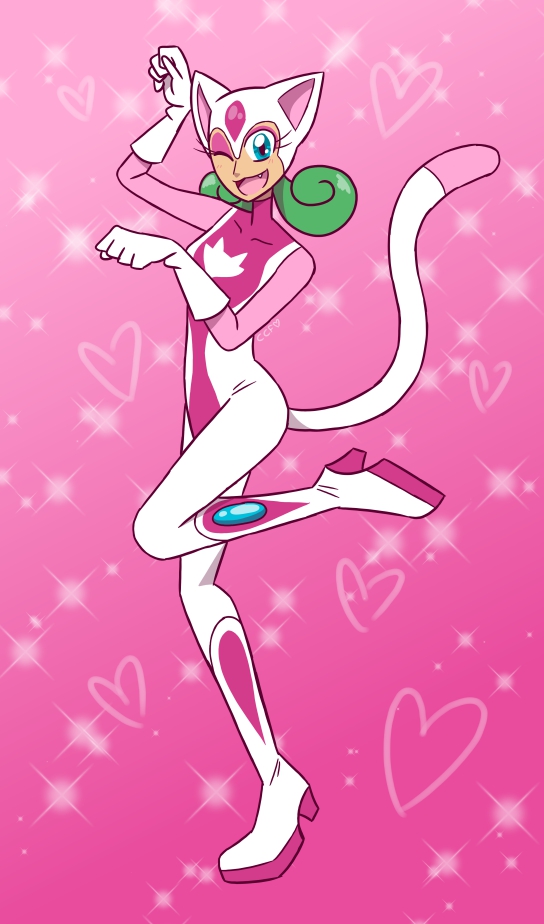 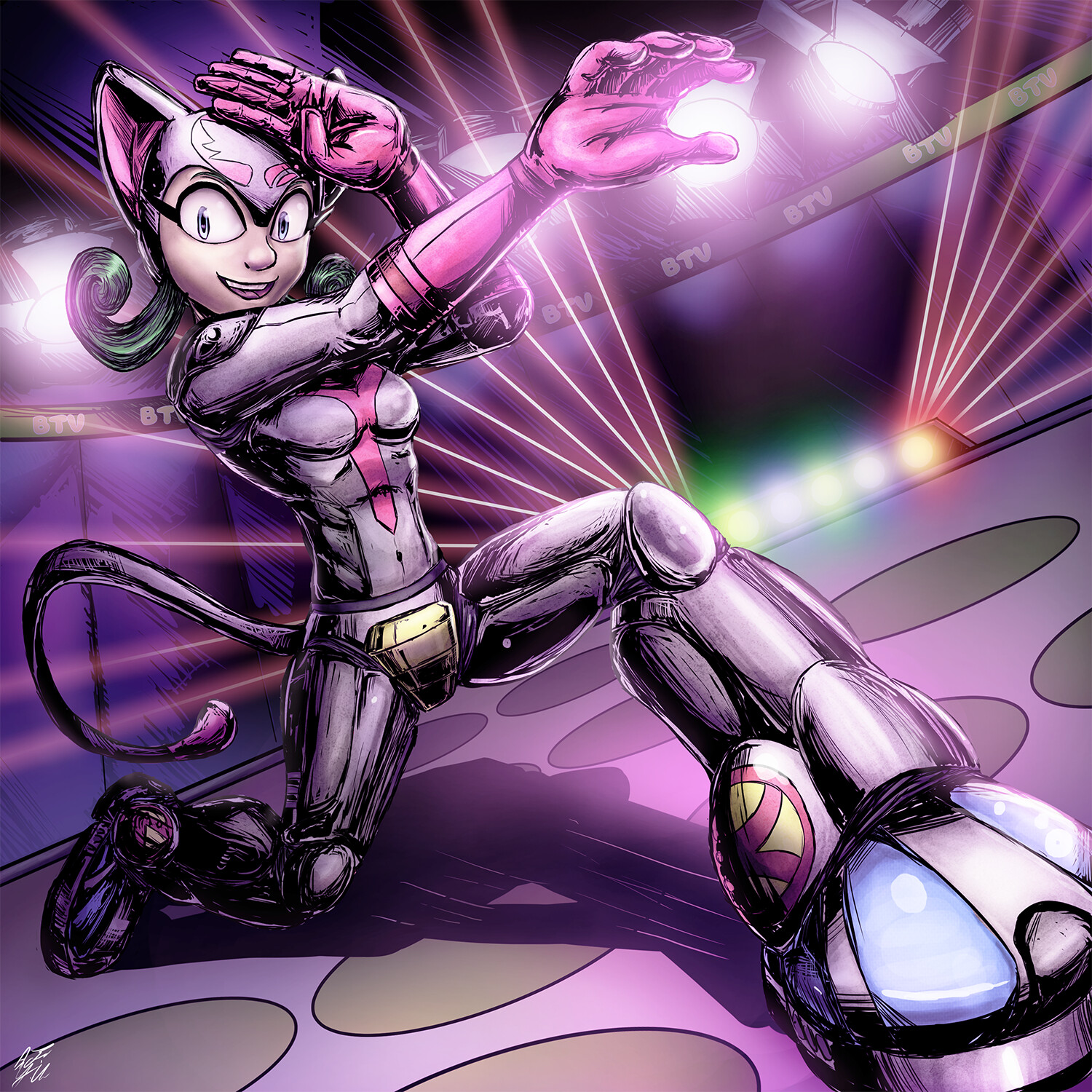 Our love is sanctified : 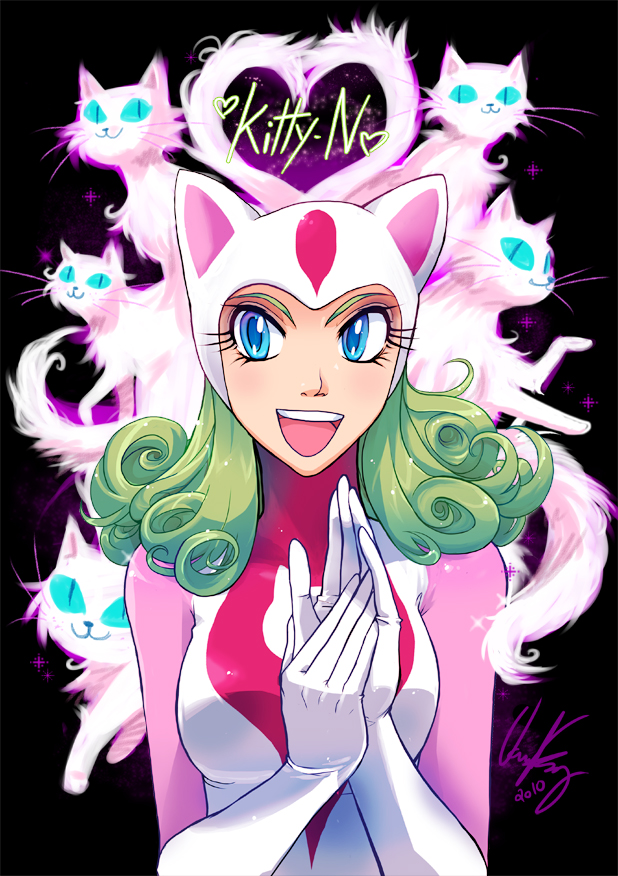 Her show tried a different artstyle for one episode:

Personality: Many might think that the woman known only to some as Kaori Nakajima would be a far cry from her show persona of Kitty N, but the truth is the opposite. Kaori lives as a perpetual optimist and idealist, always believing in being able to better one's situation and that despite the hardships that she may endure justice and truth will prevail in the end.

In the ring she carries herself much like she does in her TV show, giving her best effort in a match and showing respect when its due and contempt when its warranted. The lady often is happy to spend time with her fans and get to know them to help them in becoming the heroes of their own stories.

Past: Kaori Nakajima wasn't much growing up, she came from a humble background with a salaryman dad and a stay at home mom. Money was tight with the house not even being able to afford cable half the time, so Kaori was often given DVDs of old kamen rider shows and idol performances to amuse herself and became enraptured by the shows. Eventually she'd move onto taking dance classes and acting clubs and straight out of high school and got sought out for a trail as the female lead of a new show that would be hitting the air soon.

The show was dubbed "Love Love Senshi Miracle 5." which featured her and other rookie actors defeating various monsters with the power of song and dance, it took the media world by storm with its catchy songs and crisp movements and fight scenes. A year after the show's release the stars of the show would be taking a tour around Japan, Kaori sought to take her character to the next level and sought out various wrestling promotions that were keen to have such a hot icon signed onto them with AFW being the highest bidder and a week after it was announced that Kitty N would be gracing Tension to save the day from the evildoers!

Plays a mean game of Shogi

Is rarely seen in public, some question if her green hair is a wig or not. No answer has been given.