Vanessa vs Minerva: Trapping a fox

Vanessa vs Minerva: Trapping a fox

In the locker room, one half of the tag team that was known as the Nottingham knights was finishing up a few last minute stretches. She would be making her debut into singles scene after months of being only in the tag side of the ring. She loved her partner Shin like a sister, but Vanessa couldn’t help but be a little envious of her much bigger friend. The bear had multiple singles matches under her belt while this would be the first for the Fox. But that was fine, Vanessa fully planned on using this submissions match to make a big splash for her debut.

Unfortunately, Shin wouldn’t be able to be here to see her off. Though she did say that she would be here by the time the match was underway, so the brunette was certain that she would see her partner after all was said and done. Shin had told her it was so she could get some last minute training in, but the brunette wasn’t easily convinced. She was pretty certain that “going to the gym” was just another way of saying she was planning on another roll in the sack with that secret boyfriend the fox had yet to meet. Though from the way Shin’s face lit up like a Christmas tree whenever she made mention of it, she had a pretty decent idea of who it would be. 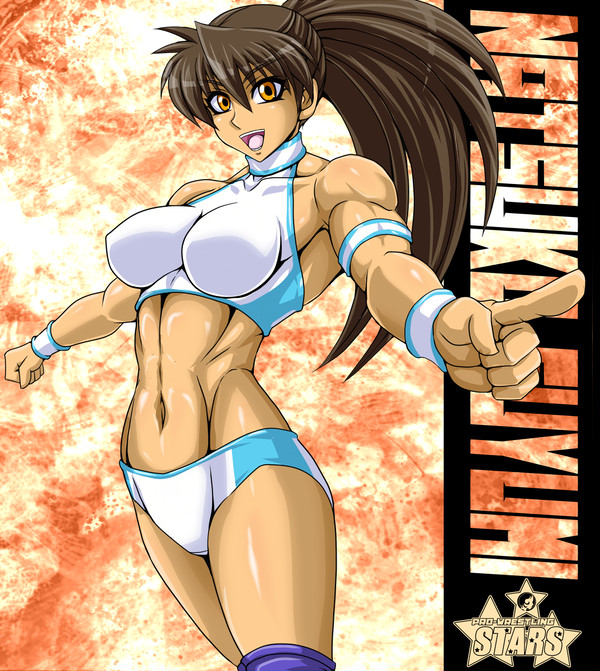 A sudden knock would snap her out of her thoughts, and Vanessa gave one last stretch before hopping to her feet and leaving the locker room to make way towards the gorilla position. Hopping from one foot to another, Vanessa calmed her nerves as she heard her theme music begin to play. Then with a smile she leapt out and into the arena. Her baby blue and white attire fitting tightly to her slim physique as she made her way to the ring waving and high fiving the hands of the fans as she passed. Finally she slipped inside of the ring and expertly climbed a turnbuckle with her arms in the air. She then jumped down and leaned against the corner as she waited for her opponent.

Once Vanessa’s music faded out, an ominous silence filled the arena for several more seconds, and then the lights went out.

The question of who Vanessa’s first singles opponent would be was then clearly answered by the familiar strings and drums of the Rains of Castamere, and the lights came back on to reveal Minerva standing on the entranceway! Her arrival was met by a few different reactions from the crowd. The vast majority booed, all too aware of what kind of woman this was.

After ascending the steps and entering the ring, Minerva went into her corner and kicked off her shoes to leave her feet bare. Then she turned and grinned while she looked toward her foe. “I hope you’re ready for this. It would be a shame if you break before I finish having my fun.”
_________________
LARIATO'S LOCKER ROOM

This may have been Vanessa’s first singles match in the league. But she had been in the Afw a long time now. Long enough to know who some of the big players are. So while she was initially confused at the lights going out, she immediately felt herself tense up when she heard a familiar string melody play out throughout the arena.

Was this a form of revenge from management for Vanessa’s asking of getting into the singles ring? If so then she had no idea they could be so petty. But despite the shock of it all, it made Vanessa only that more determined to win. Especially when Minerva finally came in and asked her not to break too easily. “Tch! Only if you promise to do the same. I don’t plan on being an easy win, former champ or not.”
_________________
RINGROPES RINGROSTER
https://www.afwrpg.com/t20768-ringropes-ringroster#552569

The chuckle that came from Minerva’s lips and the grin she wore reflected her cold amusement at Vanessa’s comments. Despite it being the woman’s first singles match here, the Dane’s foe clearly knew of her. It had been written on her expression since the first notes of Minerva’s music had played. She didn’t seem afraid per se, but she seemed to understand that management hadn’t exactly done Vanessa any favors by booking this match.

Naturally, Minerva intended to prove she was right to believe that. When the bell rang she moved gracefully, but with purpose as she began to circle her for, eyes remaining locked on her all the while. Confident as Minerva was, she wasn’t foolish enough to charge right in and leave herself open for a counter. She intended to learn a bit about this girl before dismantling her.

Gradually shifting in to close the gap, Minerva brought her hands up and lashed out to try to initiate a simple collar-and-elbow lockup. If that worked, then the second their arms were intertwined Minerva would try to plow straight forward, intending to use her strength to drive Vanessa back roughly into one of the corners. Of course the ref would be there to break them up if all went according to plan. But either way, with this simple tactic Minerva planned to get a general idea of Vanessa’s strength and reaction time.
_________________
LARIATO'S LOCKER ROOM

Well. Any thoughts on this being a possible quick and easy match just went right out the window. Vanessa knew of Minerva only by reputation, and said reputation wasn’t good. The cruel chuckle that the brunette heard from her opponent lips only confirmed said fact. Minerva planned on making Vanessa another example. Well, the fox was going to do her damndest to make sure that didn’t happen.

So stepping forward she would meet the former champion in the center of the ring and lock her arms with hers in a classic collar and elbow tie up. Vanessa’s eyes never leaving Minerva’s as she began to push with all of her might against her. Teeth gritting as she pushed as hard as she could.

Unfortunately, strength wasn’t Vanessa’s strong suit funnily enough. So despite being the same size as Minerva, she slowly began to get pushed back. Step by step and ever closer to the corner behind her. However, Vanessa refused to let Minerva have this victory and so at the last moment before she hit the corner. She would twist her hips and yank her arms down. Pressing the former champs head against the side of her belly as she locked her in a headlock!
_________________
RINGROPES RINGROSTER
https://www.afwrpg.com/t20768-ringropes-ringroster#552569