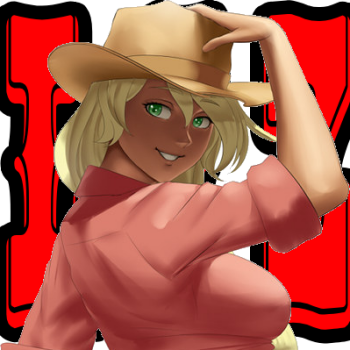 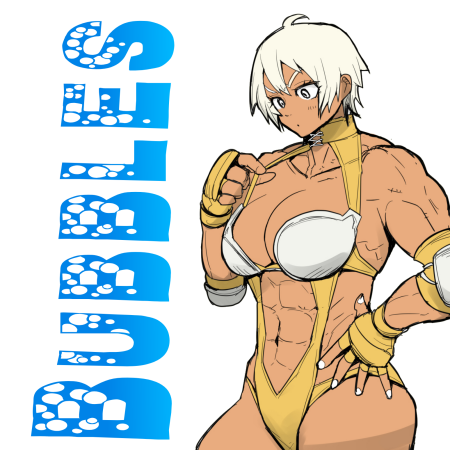 What did Bubbles have to think of this match?

Bubbles was hanging out in the gorilla position with arms folded, grumbling with a little pout. She had that face on. Her best stubborn little girl face, the most she could manage when she stood over six feet tall with muscles bigger than some heads. It was all an act, of course, and one she liked to bring out on the rare occasions that Mariah got her to do something she didn’t want to do. Sometimes it worked. Sometimes it didn’t.

This wasn’t one of the times it worked. ”You know, if you keep making your face like that, it’ll stay that way eventually.”

Bubbles made a ‘hmph’- a loud, audible ‘hmph’ -  as she glared at Mariah. It was a waste of energy, really. Despite the look, Mariah kept on sitting there, typing at her laptop,, giving her the bare minimum of attention. The two of them had been together long enough that her wife knew how to handle her rare moods, and she was doing it with gusto today. ”Pfft. You’re making a lot of jokes for a woman who isn’t getting any sex for a week.”

That one got a real reaction from Mariah: A full fledged laugh and a snort. Not exactly what Bubbles was going for. ”Bubbles, threats only work if you have the self control to follow through. You might as well threaten to never drink water again or something. I’d believe that way sooner than you going an entire week without fucking me.”

Bubbles opened her mouth to rebut, then closed it when she realized she had nothing witty to come back with. Mariah was right. She could go two days, maybe three, with having her wife in the bedroom, but a week? That was way too much. ”Ugh.” She sagged, letting it go with a heavy sigh. ”Just tell me why we’re doing non-hentai matches, again? They’re so boring.”

”It’s not a nonhentai match.” Mariah shrugged and hit the keyboard a few more times, tapping with rapid strokes. ”You can get freaky, if you want.”

”Yeah, but my opponent doesn’t have to! That takes out so much of the fun.” She threw her hands up, almost high enough to the gaffing above. ”And why won’t you tell me who I’m up against? I want to look her up, see what she’s like, and-”

Mariah held up a hand and got her to pause, as she looked over from the computer screen with a knowing smile, as if she was in on a joke that Bubbles hadn't quite picked up on just yet. ”Bubbles. Trust me.”

A few minutes later, as they were making their way down to the ring, Bubbles still wasn’t feeling the ‘trust’. She’d resigned herself to the situation, though. Whoever she was up against might not be in the mood, but there were ways to get her going, she was sure of it. It would just be a lot harder than if she were willing from the start.

Without making eye contact with her wife, Bubbles promptly sauntered up the steps and made her way through the ropes, stepping to the inside of the ring. She gave a quick thumbs up to the crowd, putting on her best face for the masses, before she went over to her corner and leaned against the ropes. Mariah was making this out to be a big secret for some reason, and she could only make some lame guesses on why that was. Maybe she was wrestling one of those crazy nuns or something?
_________________

Liz gave her an exasperated look, but before she could protest further a stage-hand poked around the corner to call them into position. The blonde shook herself out to get her "game face" on and began to head towards the top of the ramp, and then she noticed Lily moving to follow. "You... don't usually escort me to the ring." The suspicious tone had returned.

Lily fixed her glasses on her nose and gave Liz a playful swat on the ass, "Yeah, but it's your first match since our hiatus so I figured I'd come out and work the crowd. Now let's go!"

Giving a slight hop forward Liz started her way up to the stage with Lily at her side, muttering under her breath "I think their are regulations against working the crowd without a LOT of waivers and a medical clearance."

The duo stepped out into the spotlight at the top of the ramp to a smattering of applause, mostly for "buff lady in bikini" and "sexy office lady" from people who had little recollection as to who they were. The sensuous rhythm of Black Velvet played them down and Liz did her best to focus straight ahead and walk serenely towards the ring and her... equally large blonde and buxom opponent. But just behind her Lily swished her hips and blew kisses to the crowd, stopping every few steps to sprinkle in a quick little move from her old pole dancing days. A few people threw bills at her, which she made mental note of for later retrieval.

The cowgirl broke into a short jog at the bottom of the ramp to throw herself into a roll beneath the bottom rope, popping up onto one knee once in the ring. She wasn't familiar with Bubbles by reputation, and so only eyed her as a beautiful stranger... with an equally attractive manager. A few things started to make more sense at least. Perhaps these two had a reputation for interference and Lily was here to keep an eye on this other woman... She'd have to be careful. Climbing to her feet she offered a few friendly smiles to the crowd and an exuberant wave before turning her eyes back to her opponent.

For her part, Lily strolled quietly to Liz's corner, though if she caught Mariah's eye would flash her a bawdy wink over the rim of her glasses.
_________________
Character Selection (Availability may vary)

The moment Bubbles laid eyes on Liz, she made this noise. It was a high-pitched, squawking and squeaky shriek, far beyond the range that anyone would ever think was possible with her deep, Southern drawl. Her eyes lit up with this look of pure, unadulterated joy and her mouth grew into a smile so wide it actually hurt her jaw to maintain it.

And Mariah caught it all on her phone. Perfect.

Bubbles couldn't be bothered to notice. Her focus was solely on the perfect vision making her way down to the ring. While Bubbles didn’t discriminate all that much when it came to her attractions - aside from the male half of the population - she always had a special place in her heart for women around her own size. The big ones, the strong ones, the ones she could go crazy on and not have to worry about smashing pelvises. Like after like, whatever you wanted to call it.

Liz was checking off so many of those boxes. The body, the muscles, the height, the walk, and all of it that nice little package. God Bless the USA.

She was chewing her lip as her fellow giantess made her way into the ring, loving her look more and more now that she had a close look. It took some real effort to pry her view away from Liz and back to her wife, who was currently busy exchanging knowing looks with Lily. The little demonesses. If Bubbles had any energy left after this match, she knew exactly where she was putting all of it.

But that was later. For now, she was going to give Elizabeth Page her full attention.

”Well, well, well, well, well, well!” Bubbles took a little stroll to the side, getting a look at Liz from a few different angles, whistling with approval. The audience shared her sentiments, good taste all around. ”You are something, Ms. Page. Bubbles Burste, love to see you.” She stepped over and gave Liz a quick bump with her hips, before she bounced back away. ”I’m all ready for this. You?”

Mariah, for her part, just looked on with her elbows on the apron, watching and taking the occasional glance Lily’s way. Aside from the obvious interest in this match, she was just happy to see Lily again. She still had fond memories of their time together, easily one of the best non-Bubbles sensual encounters in her life. If there was time, maybe they could catch up later. Get some dinner. Other things, if the mood called for it.
_________________

Lily couldn't suppress a little giggle at Bubbles' reaction, the obvious delight on the woman's face. She remembered her last encounter her Mariah and Bubbles fondly, cutting their budding... partnership short was one of major regrets upon "going on sabbatical". It seemed this match was a first step in re-opening some opportunities she'd left behind.

Liz was still far too dour to look like she was really enjoying herself more than her usual arrogant smile. Even as Bubbles circled and whistled she only curled an arm over her own head, placing the opposite hand on her hip to flex and pose to facilitate her opponent's admiration. The audience likewise appreciated the opportunity and made it known. It felt surprisingly good, she'd been too prudish during her previous matches to really soak in the crowd's collective thirst. When she finally spoke it was with her own Georgia drawl and a parting hip-bump of her own, "Bubbles? That's adorable. Honey, I'm more than ready for you." But her blue eyes couldn't help but wander up the woman's figure as she slipped away, absently biting her lower lip in appreciation.
_________________
Character Selection (Availability may vary)